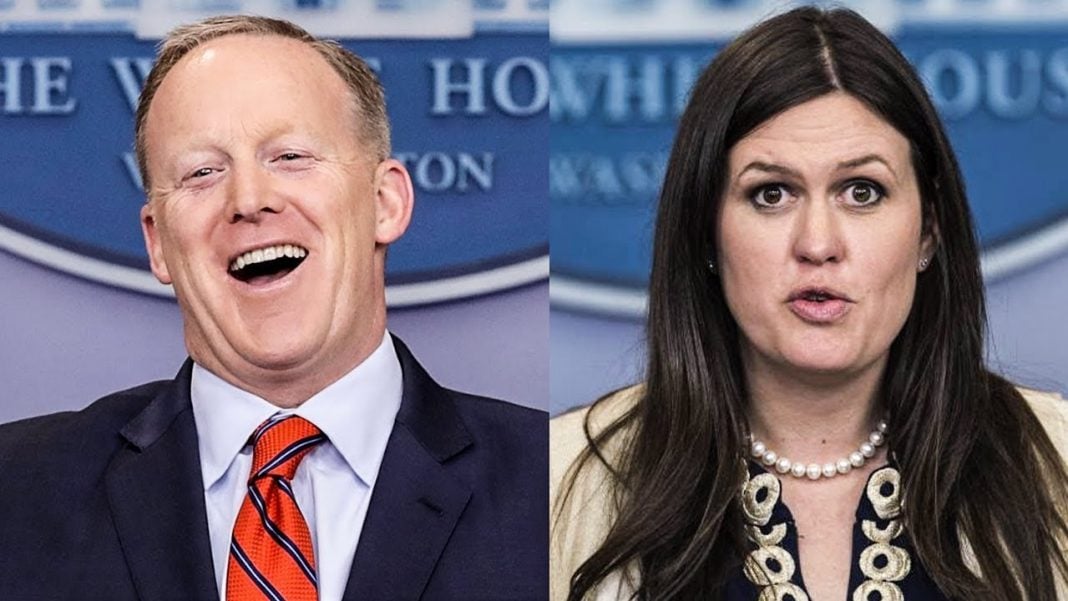 Former White House Press Secretary Sean Spicer has finally broken his silence since leaving the Trump administration in order to come to the defense of the woman who took over his job – Sarah Huckabee Sanders. Spicer is furious that there isn’t more public backlash over a recent op-ed attacking Sanders for her appearance, but he ignores the fact that there has been backlash from both the right and left and the author of the column printed an apology. Ring of Fire’s Farron Cousins explains why Spicer is trying to distract us from Huckabee Sanders’ lies.

Sean Spicer has remained relatively quiet since leaving the White House earlier this summer and being replaced with Sarah Huckabee Sanders, but this week he decided to kind of break his self-imposed exile to appear on Fox & Friends to defend Sarah Huckabee Sanders from the recent attack that she got from the LA Times. Specifically, an LA Times op-ed writer wrote that she looked like a chunky soccer mom. Sean Spicer, not one to let that kind of comment fly, decided to go on Fox & Friends where he was angry about the fact that this is not front-page headline news all over the country, why nobody is talking about it, and why this issue has just been buried by the mainstream media.

Well, first and foremost, yes the attack that this writer gave to Sarah Huckabee Sanders, insulting her appearance, was very juvenile, very childish, completely unnecessary, and very, just in general, mean. There was no need to go after Sarah Huckabee Sanders’ appearance because there are so many other things that she gives us on a near-daily basis that you could attack her for, like the constant lying. That’s where you go after her. You don’t attack her appearance, but something Sean Spicer needs to understand is that the guy who wrote that op-ed has already issued a retraction and an apology for that. Members of both the Left and the Right have come out to defend Sarah Huckabee Sanders, including some on Fox News, so why isn’t it headline news? Maybe because the issue’s basically been resolved and it was the one guy at the LA Times who most people in the world have never even heard of wrote one sentence that he shouldn’t have written, and everybody’s moved on.

Most importantly, Sarah Huckabee Sanders has moved on to continuously lie about the actions of the Trump Administration, so yeah, I’m sure when you go Google Sarah Huckabee Sanders the attack on her appearance isn’t going to show up first, because she’s said probably 50 to 100 incorrect things since that column came out. I get it. I understand that Sean Spicer’s not happy about them talking about her appearance or her weight, because again, that is a below-the-belt attack. Sarah Huckabee Sanders has never come out and claimed to be in great shape or whatever like Donald Trump has. She has never opened herself up to that kind of criticism, and therefore it is off limits, should be off limits either way.

But Sean Spicer right now is trying to distract us from the real issue with Huckabee Sanders, and that is the fact that she is telling more lies on a daily basis than Sean Spicer could’ve ever dreamed of. Do not fall for this Sean Spicer distraction here. Focus on what Sarah Huckabee Sanders actually says, not what she’s wearing, not what she looks like, but what she is doing as a person to cover up some of the most egregious actions of this Trump Administration. Sean Spicer wants you to focus on one thing one guy said one time that few people even paid attention to. Focus on the lies instead.