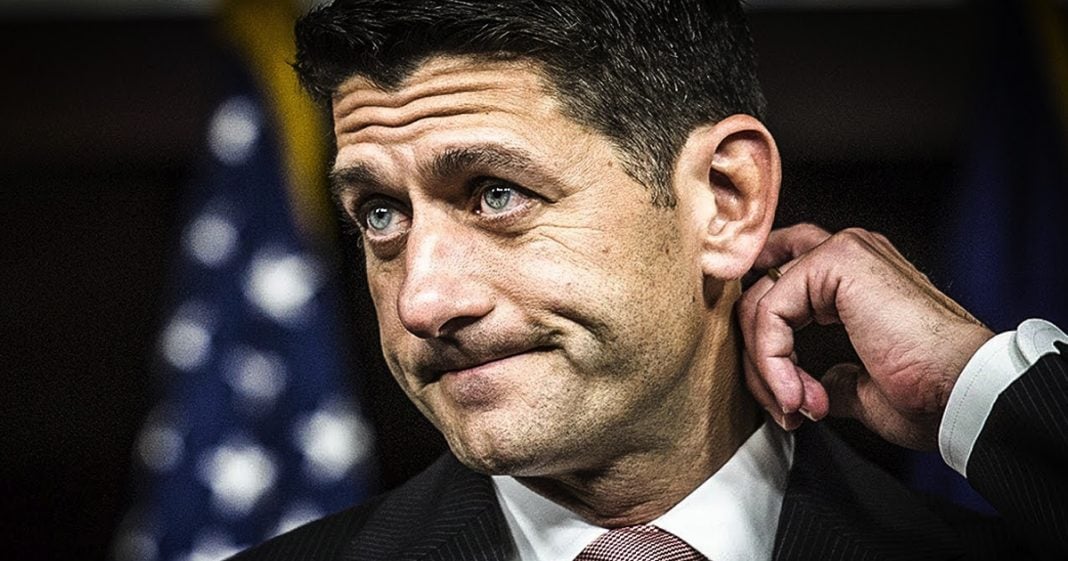 Republican Speaker of the House Paul Ryan said that the reason he and his colleagues offer their “thoughts and prayers” after mass shootings is because “prayers actually work!” The latest mass shooting in the United States took place in a church…while people were praying. Ryan’s excuse is a distraction from the fact that he has taken more money from the gun lobby than any other sitting politician, as Ring of Fire’s Farron Cousins explains.

On Sunday, as I’m sure everyone in this country, possibly most people around the world, already realize right now, there was another mass shooting in the state of Texas. This one took place at a church. Twenty-six people died. Fourteen of them were children. For the last 48 hours, I’ve done a good job of trying to not say a single word about it, because I don’t even know what to say about mass shootings at this point.

There have been some really horrible, horrific, disgusting responses from Republicans in the wake of this mass shooting. Some Republicans have said, hey, at least they got shot in church, their prayers were answered. FOX News has said church is the best place to get shot. I think the response that’s going to go ahead and rank as the worst thing I’ve ever heard following a mass shooting is going to come from House Speaker Paul Ryan who, on Monday, said that the reason we offer prayers after a mass shooting is because prayers work.

Paul Ryan, Speaker of the House, highest ranking Republican in Washington DC, with the exception of Donald Trump and Mike Pence, says that prayers after mass shootings actually work. How? Did they prevent one? Are they preventing mass shootings that we don’t know about? Because I’m pretty sure after Las Vegas a month ago, you offered prayers and thoughts and then Sunday happened.

Those people who were shot and killed, as other people have pointed out, were literally in the middle of thoughts and prayers in a house of God. They’re still dead. Fourteen of them are children and, if that doesn’t affect you, go look at the pictures of the victims. Sit there, stare at them and contemplate what it means for the parents and the families who lost their children. Never will see them again, won’t ever hear their voices again. And the children who lost their parents, and brothers and sisters, and husbands and wives.

Thoughts and prayers are bullshit at this point. Your moment of silence in the House is a full representation of your entire stance on gun violence. Silence. That is why I am beyond proud of Democratic Representative Ted Lieu, who had the courage to walk out of that moment of silence, because it’s meaningless. You are in a position to do something about this. There was a time in this country where we didn’t necessarily have to worry about getting shot up when we went to church or when we were at a concert or when we were at a nightclub. Now we do, because of you, because of your party, because of your refusal to take action and get these assault rifles and these semi-automatic weapons and these modifications that make something into a semi-automatic weapon, you won’t get them off the street.

Yeah, If we reduced everybody down to having a six-shooter, I’m sure we’d still have shootings, but you’re going to kill a lot fewer people with a revolver than you are with an AR-15, and you still don’t have to step on anybody’s constitutional rights. But you won’t do that. Paul Ryan, you won’t do that because you are swimming in NRA money. You’re a disgusting, worthless piece of human garbage, and that is probably the nicest thing that I can say about you right now.