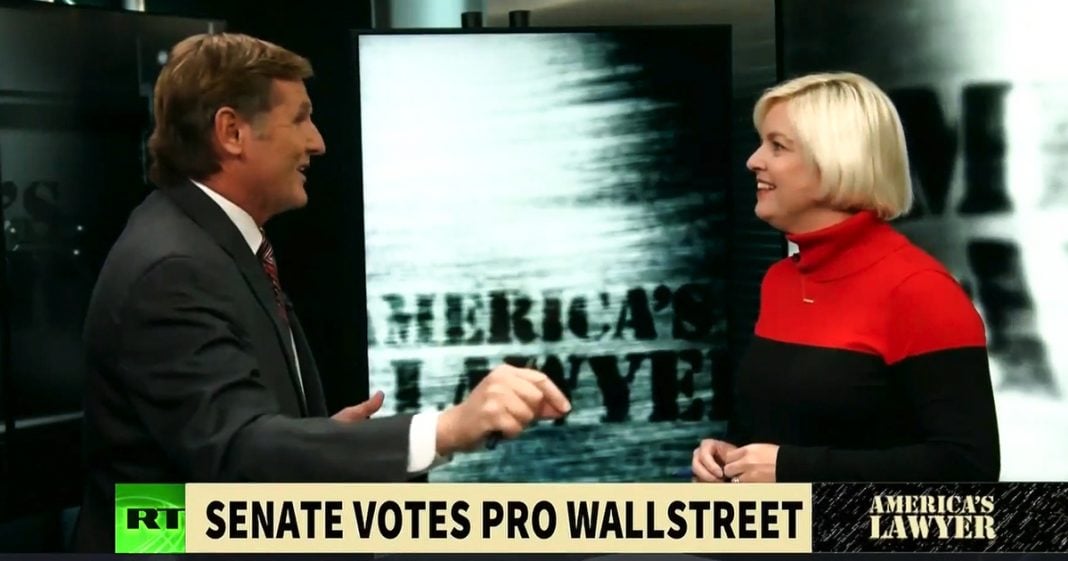 Via America’s Lawyer: Mike Papantonio is joined by Mollye Barrows, Legal Journalist for The Trial Lawyer Magazine, to talk about how the Senate voted to empower Wall Street banks to force its customers into arbitration deals to avoid court.

Mike Papantonio: A big win for the financial industry was achieved after the US Senate allowed banks to bar customers from filing class action lawsuits against them. At the cost of consumer rights, Republicans successfully completely squashed the rule that would’ve given average citizens more power to resolve disputes and protect themselves from predatory banking practices.

Joining me to talk about this is legal journalist for Trial Lawyer Magazine Mollye Barrows.

Mollye, there’s no question who wins. Big banks win. Consumers get hammered again. Isn’t that how this story adds up?

Mollye Barrows: Yes. It’s the classic spin, ‘We’re doing this to protect you,’ but not at all. The ones that are getting protected are the financial institutions. Basically, when you and I sign up for a credit card, or maybe open up a new account, there is clauses in there that say if you have a dispute with one of the practices, then the bank gets to choose a third person, a mediator. A forced arbitration, if you will, and you don’t have the option to sue.

Well, this new rule passed by the Consumer Financial Protection Bureau, and basically it went into action in July … These banking institutions have been complaining about it ever since, and then the Senate basically … And Mike Pence was the tie-breaking vote … Agreed that customers don’t have that option anymore.

Mike Papantonio: So here we’ve got Trump and Pence … They’re running on ‘We’re the populous. We care about the consumer.’

Mollye Barrows: Not at all.

Mollye Barrows: Yes, that’s exactly right. That’s the problem with the whole arbitration system. It’s not like you and I can go up there and say, ‘I want to talk to the bank president.’ Speaking of a situation like Wachovia, where they opened up three-and-a-half million accounts, phony accounts, that caused customers wrecked their lives financially, basically, in many cases. So some of those … And that’s where this rule came from … Some of those customers wanted to pursue basically a class action lawsuit, and they were not allowed to pursue that. This rule would’ve allowed them to go around that ban and pursue that. In Wachovia, they were, but yes.

Mike Papantonio: So, what’s important about the class action is if you have a million people that lose $100, if it’s a class action, they can all bring that case together, but if they have to bring it individually, one person who lost $100, it’s going to cost them $20,000 just to get the $100 back. So, in the end, the bank is able to say, ‘Gee whiz, this is pretty good profit margin for us. We stole all this money,’ like Wachovia has done, and all these other banks of done so many times. ‘We’ve stolen all this money,’ … Bank of America … Just take a look at how many times these people have committed outright criminal fraud.

So, now consumers have nothing they can do about it, right?

Mollye Barrows: No. No. I mean, unless they want to pursue it individually, like you said, but basically, this rule would’ve allowed them to go around those arbitration clauses and pursue class action suits, and now they’re not going to be allowed to do that. It also goes to the bigger issue of, again, a Donald Trump led government, especially with the Republicans. Back in March, they also pushed the Fairness and Class Action Litigation Act, which is still moving its way through Congress, and that’s got a long uphill battle, but it’s another attempt to limit consumers’ options when it comes to holding these institutions accountable fiscally.

Mike Papantonio: Big day for banks. Terrible day for consumers. We’re used to seeing that again and again. Thanks for joining me ok.