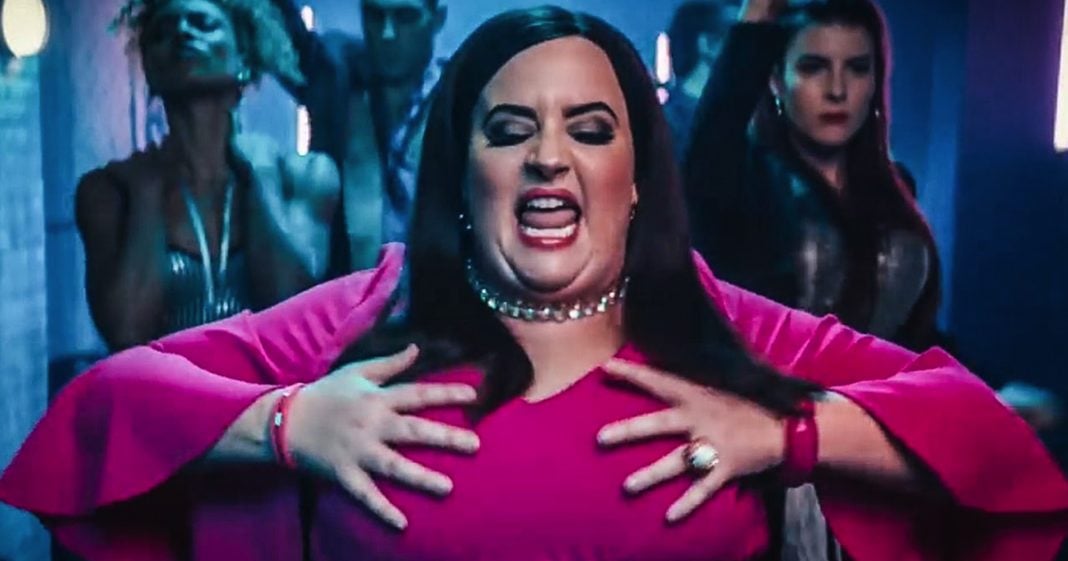 Saturday Night Live once again went after White House Press Secretary Sarah Huckabee Sanders for her apparent inability to tell the truth to reporters, this time intersplicing her press conference with “Huckabee Sanders” performing Demi Lovato’s “Confident.” The skit poked fun at the really, really bad week that the Trump administration suffered, and their version of Huckabee Sanders handled the reporters in a nearly identical fashion to the real version. Ring of Fire’s Farron Cousins discusses this.

“Reporter”: What I want to know is how you can continue to stand here day after day and maintain there’s no connection to the President?

“Sarah Huckabee Sanders”: Well, it’s time for me to take it bounce right now. Going to fake it now before you go down. This is my game, better come to play.

All right, so what’s interesting about this is that the Demi Lovato song Confident, it’s meant to show a strong independent woman who has no problem taking on whatever challenges lie in front of her. That is a really good analogy for how Sarah Hucakbee Sanders sees herself. Sometimes we get a parody that’s so close to reality that it’s almost shocking to a certain degree. Because Sarah Hucakbee Sanders comes out there every day on that podium and believes honestly that she is doing the right thing even when she’s lying to the American public. At the beginning of that clip, which you can catch the full thing, we’ll have a link in the video description there, she says, “I see some of you are still wearing your reporter costumes from Halloween, making a dig at the press, which is absolutely something that Sarah Hucakbee Sanders would do.

She then admitted that she wasn’t going to really answer any of their questions, she was just going to later on give them a six and half minute riddle about taxes and beers and whatever mimicking what Sarah Hucakbee Sanders had done earlier in the week trying to explain the tax code by comparing it to beers at a bar.

SNL’s Sarah Hucakbee Sanders who’s played by cast member Aidy Bryant, is probably one of the more accurate portrayals of anyone in this administration that we’ve seen. Most notably, because they understand a little bit more about Huckabee Sanders than most people realize and the Demi Lovato Confident song really showed what they know about her. She believes she’s doing the right thing by lying to the America public. She believes that she’s somehow breaking through and being her own person by not telling the truth, by railroading reporters, by attacking the media, she thinks that she is in charge in this entire situation. But as most of us know, all it’s going to take is a few more SNL skits for Donald Trump to get tired of her, think that she’s the one tanking his administration and my guess is that six months, maybe even a year from now, Huckabee Sanders is just going to be a distant memory of yet another person removed from the Trump administration.