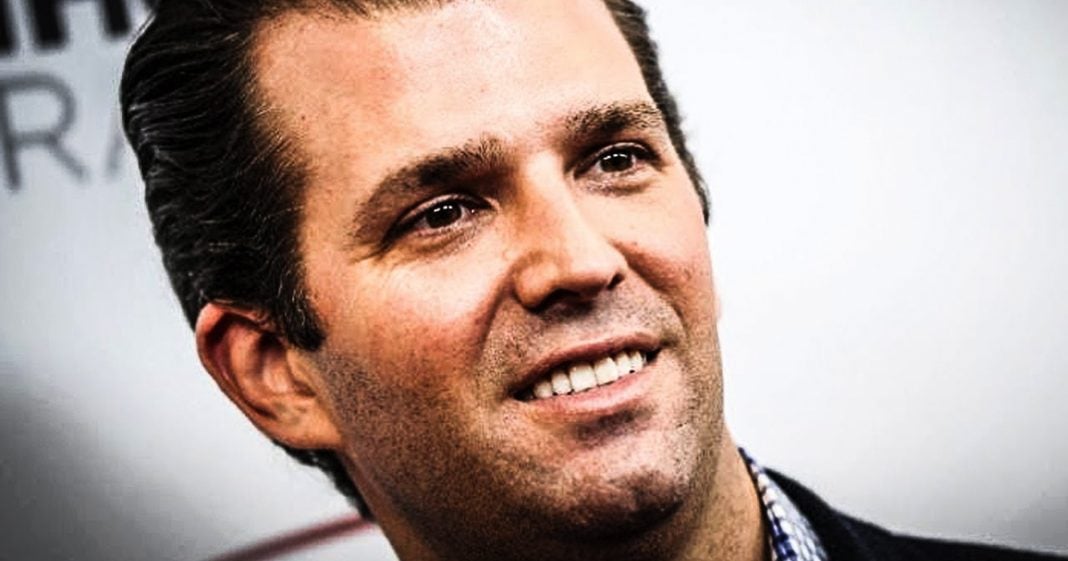 A major bombshell has dropped in the ongoing Trump-Russia saga, this time involving Trump Jr.’s June 2016 meeting with a Russian lawyer who has ties to the Kremlin. According to a recent interview with that lawyer, she says that Trump Jr. offered to re-examine several anti-Russian laws if they would hand over information about Hillary Clinton’s campaign. This is bribery and collusion all in one, as Ring of Fire’s Farron Cousins explains.

On June 9, 2016, Donald Trump Jr met with Russian attorney, Natalia Veselnitskaya, in a meeting that has become one of the central focuses of the entire Trump Russia collusion story. And while the Trump administration kind of spoke for Junior and tried to cover it all up saying, “It was about adoption. We didn’t really know what for sure what happened,” we now have a much clearer picture of what actually took place in that meeting because that attorney, Natalia Veselnitskaya, gave a recent interview about 2-1/2 hours long where she laid out exactly what Donald Trump wanted from the Russians and what he was willing to give the Russians in exchange for that particular information.

According to Veselnitskaya, Donald Trump offered to, if Trump got elected, re-look at some of the more anti-Russia laws that the United States have passed over the years. Part of that actually included the forthcoming Russian sanctions. In exchange, according to Veselnitskaya, Trump Jr wanted to get his hands on financial documents showing that Hillary Clinton was accepting money from people who were a little bit more shady than usual even though those same people actually gave a lot of money, hundreds of thousands, to Republicans as well.

So, basically, according to what Veselnitskaya’s telling us here is that Donald Trump attempted to bribe the Russians during this meeting by saying, “If you give me what I want, I’m going to make sure that this happens for you.” That’s bribery. That’s collusion, and more importantly, feels a lot like treason here. I know Republicans and even some Democrats like to tell us that this whole Russia story is a big nothingburger, but this story from this attorney, who was present who actually basically held the meeting, kind of seems like a massive bombshell story that everyone in this country should be talking about right now.

Now, to her credit, Veselnitskaya has agreed to talk to the Senate Judiciary Committee about this particular meeting on one condition. She wants the entire meeting to be public record so that everyone can know and see and hear what she has to say. So far, the Senate has not agreed to those terms, so, therefore, she has not yet testified in front of the committee.

If they agree to this, which I imagine if the media focuses enough on this story, they’re going to, we’re going to get some real bombshells about Trump Jr’s involvement with this whole collusion scandal because at the heart of this, it appears that Donald Trump Jr acting in coordination with Jared Kushner and with approval from his father, seems like Trump Jr’s probably the guy who coordinated almost all of this and could be one of the next people to get himself a Mueller indictment.