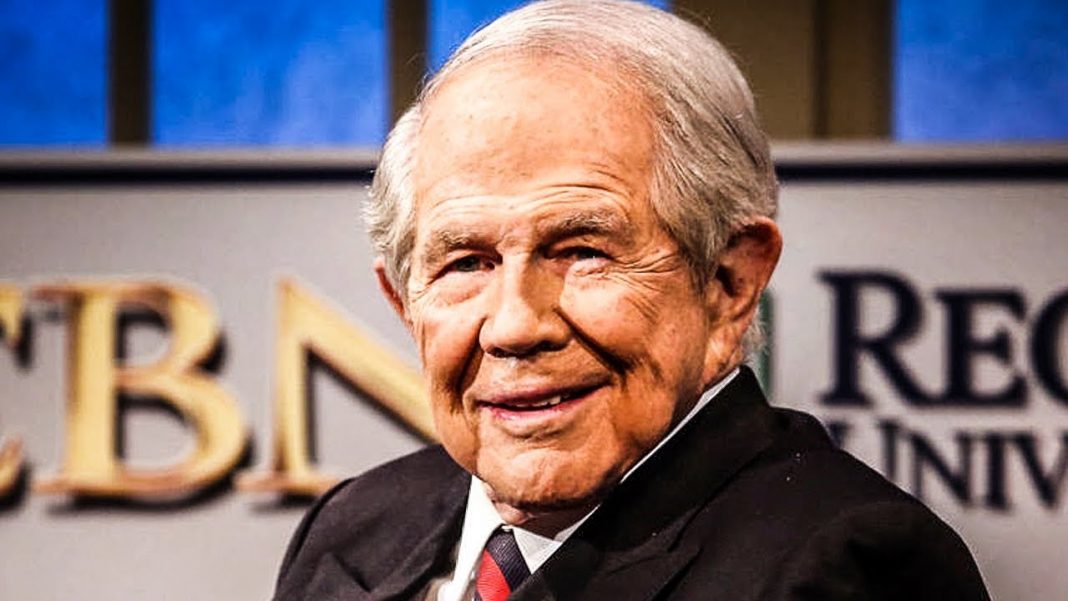 Televangelist and all-around religious nut Pat Robertson said on Monday that Donald Trump needed to simply pardon everyone involved in the ongoing investigations and then he should fire special prosecutor Robert Mueller to end the investigations for good. What happened to the “justice” that the Bible teaches? What happened to punishing the wicked? Apparently Pat Robertson forgot that the evil get what they deserve, as Ring of Fire’s Farron Cousins.

Pat Robertson, the evangelical nut job on the right, the guy who says that hurricanes are caused by gay people, they’re sent by God as his punishment because people are gay, says that Donald Trump needs to go ahead and issue pardons to everybody involved in this Mueller investigation and then he needs to fire special prosecutor Bob Mueller to end these investigations once and for all. That’s right folks. The fire and brimstone televangelist who believes in enacting God’s swift justice on people thinks that all the members of the Trump administration who have committed crimes like Paul Manafort and Richard Gates should be let off the hook and then Mueller should be fired, and we should just all move on and worship our new God, Donald Trump. That is apparently what Pat Robertson believes.

Now, I know Pat Robertson’s getting on in age, and I know that he’s clearly never quite all been there, if you know what I mean. But this little unhinged rant should go ahead and expose him as a fraud to anybody in this country that actually thought maybe he is a man of God. Because if you want to look back through the Bible and see how God reacts to people who break the law and do bad things, you’re not going to find anything in the Old Testament where God’s like, “You know what, I think you learned your lesson. I’m going to let you off the hook, and you guys need to stop being mean to this guy.” No. He would drop mountains on people, pillar of salt, that kind of thing. Not exactly the same kind of thing that Pat Robertson wants happening here.

But the bottom line is that Donald Trump has mentioned repeatedly that he wants to fire Bob Mueller in this investigation, which would send shock waves through the legal community. Anybody else who is appointed after that would know damn well that they wouldn’t be able to go as far and as deep and as hard as Bob Mueller has in this investigation, and that’s what Pat Robertson is advocating for. He wants Donald Trump and his cronies to get off the hook because he is a Republican and he supports them, and he understands the kind of damage that this investigation and these indictments will do to the Republican Party, but it’s damage that’s past due.

We lived through eight corrupt, disgusting years of the Bush administration where no one was held accountable for breaking the law, and yet they all broke the law. Bush with the torture. Cheney, Rumsfeld, Karl Rove with the Hatch Act. There’s too many lost account. And finally, we’re starting to see the Republican Party get a little bit of their comeuppance. They have been operating outside of the law for decades now.

So, Pat Robertson can shut his old pie hole, go off, retire, do whatever the hell you want, but stop acting like you know thing one about how the law operates in the United States. Because if Donald Trump fires Bob Mueller like you want him to, there will be riots, because they’ve already planned them across this country demanding that Trump be removed from office immediately. So, I suggest you choose your words a little bit more wisely next time Pat Robertson, because what you’re advocating for, would send this nation into a frenzy, the likes of which you’ve never seen.