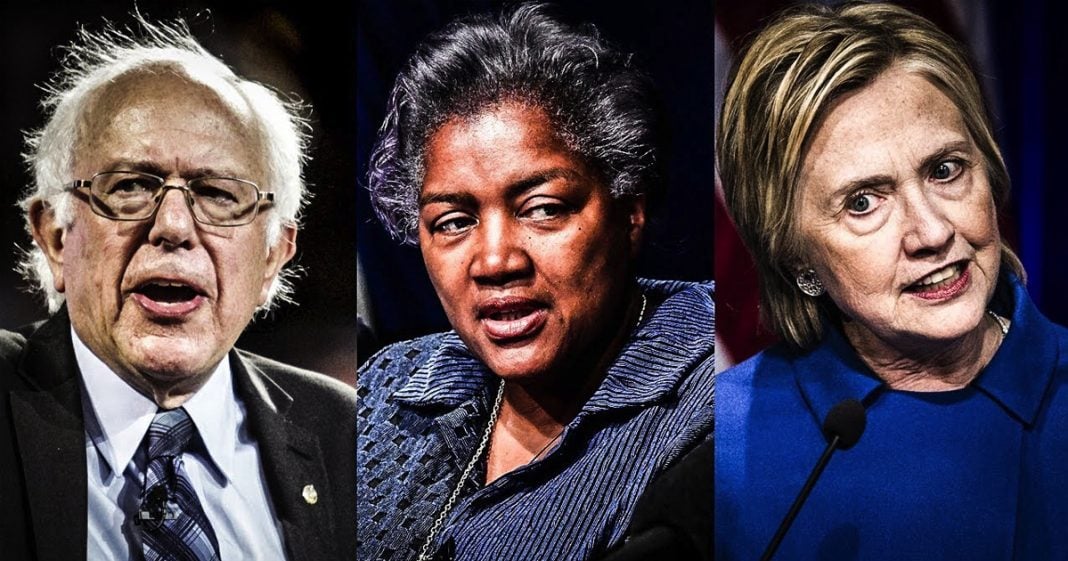 An explosive new expose in Politico by Donna Brazile reveals how the DNC did, in fact, help rig the primary system in order to make sure that Hillary Clinton won the nomination. Brazile served as interim DNC Chair after Debbie Wasserman Schultz was ousted, and Brazile has finally revealed exactly how the DNC let Hillary take over to squash the candidacy of Bernie Sanders. Ring of Fire’s Farron Cousins discusses this.

At the beginning of Monday, it was looking like this was probably going to be the worst possible week imaginable for Donald Trump and the Republican Party, when the indictments were handed down against Manafort and Gates, but, not to be outdone, the Democratic Party emerged late in the week with an op-ed by Donna Brazile in Politico, where she explained exactly how the 2016 Democratic primaries were rigged against Senator Bernie Sanders, in favor of Hillary Clinton. According to the article written by Brazile, who’s got a book coming out, and so she wanted to gain a little bit of publicity before the book comes out, there was a joint financial agreement signed between the Clinton campaign and the DNC that essentially handed control of the DNC over to Hillary Clinton and her campaign. They got to choose the staffers. They got to choose how the money was spent, and this all happened in 2015, before the debates, before any of the primaries or caucuses, and while there were still at least two democratic people running for President of the United States.

This is a move that was unprecedented. Usually, whatever party … Once the person secures the nomination, and they go through the Convention, then they get control of the party, and they get to do all these things. DNC handed it over to Hillary Clinton almost a full year before the actual Nominating Convention convened. Yeah, this kind of confirms all of the things that Bernie Sanders supporters have been saying for two years. This system was rigged in favor of Hillary Clinton. They did manipulate it, so that people saw more of her and less of Bernie, so that they didn’t have time to learn about him and know him and understand him before they went to the polls to vote. That is what happened, and that is how they rigged it, according to Donna Brazile.

Here’s the thing. Obviously very bad story for the DNC. Most of the people who were involved with this, however, including Debbie Wasserman Schultz, are now out of the Party, or, excuse me, out of the DNC itself. They’re not running it. It’s worth noting that Donna Brazile spent a lengthy amount of time in the article, talking about how incompetent and corrupt and just overall bad at leading the DNC Debbie Wasserman Schultz was. If you have not read that op-ed, I seriously suggest you do it, no matter which side of the Hillary or Bernie debate you happen to fall on.

What’s interesting, though, is what’s happened since this article came out. People that I have respected for a very long time, people that supported Hillary Clinton instead of Bernie Sanders … I don’t hold that against them, but they’re coming out, making excuses for it, at this point. Now, keep in mind, everything that the Bernie Sanders supporters have said about the Primary being rigged for two years was verified yesterday by Donna Brazile, okay? Maybe not 100% of it, but, yes, she admitted it was rigged in favor of Hillary. That was the number one complaint, and that was verified, but these Hillary Clinton supporters are still out there, trying to write it off, trying to downplay it, trying to say, “Well, Bernie wasn’t a Dem, so why should we have handed the Party control over to him?”

You shouldn’t have handed it to anybody, you freaking morons! You should’ve let the process play out, like you have in every other Democratic Primary, but you didn’t! You were so ready to coronate Hillary Clinton, that you threw the entire process in the garbage, and you lost to the least popular presidential candidate in the history of the United States. That’s on you! The destruction of the DNC is on you, and it’s on everyone who is out there still making excuses for it!

I am sick and tired of talking about Hillary Clinton. I am sick and tired of having to go out there and debate and argue online with these Hillary Clinton numb-nuts supporters, who will not shut their damn mouths and keep making excuses for things that we now know to be true. If you can’t accept reality, if you can’t accept the fact that you were accusing Bernie Sanders supporters of being racist/misogynist for two years, because of their claims that it was rigged, if you aren’t willing to come out and admit that you were wrong and apologize to them, then get the hell out of the Democratic Party! You’re part of the problem!

While the rest of us try to pick up the pieces and rebuild this into the Party that it was supposed to be, you can go join the Republicans, because that’s exactly what you sound like today! Our fears, our concerns, were confirmed. Anyone who says otherwise either is still trying to gain favor with Hillary or clearly was taking money from the Hillary campaign, either as a consultant or a staffer. If you don’t believe me, go check the histories and the financial records of most of the people defending her on Twitter today.