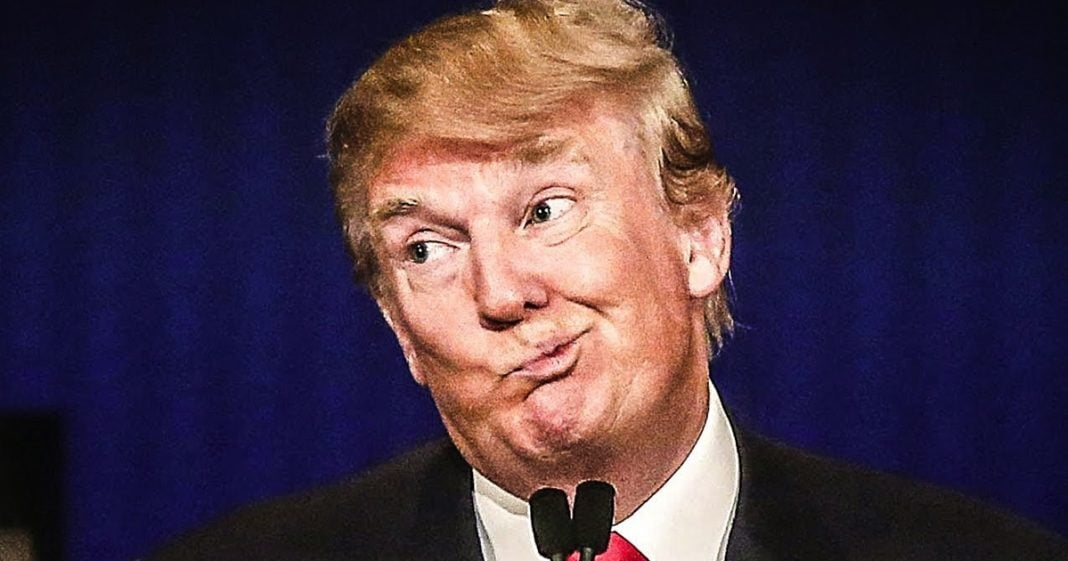 A new psychological analysis of Donald Trump’s words and actions can provide some comfort to those of us who have questioned Trump’s intelligence from the start. According to the research, Trump is a very “low analytical thinker”, which is a fancy way of saying that the man is not very smart. Ring of Fire’s Farron Cousins discusses this.

An amazing new psychological study of the actions and words of Donald Trump has revealed something that most of us in this country already realized, and that is Donald Trump is really not a smart or intelligent human being by any measure. Now what happened in this psychological study was that they have computer algorithms that go through and measure the words that people use, nouns, pronouns, verbs, adjectives. They analyze all of that to try and decipher whether or not a human being actually uses analytical thinking. Are they looking at an issue, analyzing it, and then speaking on it? Or are they making up nonsense? Essentially is what this program is designed to figure out.

And with Donald Trump it found out that no, he has very low analytical thinking ability, which means as far as intelligence quotient, IQ, goes, his isn’t very high. It can’t be because part of intelligence for anybody who’s ever actually taken an IQ test understands, it is analyzing. It is logic and figuring things out and thinking through problems. Donald Trump, according to this program and other mental health experts who’ve watched him, does not have that ability and therefore, his arguments saying that he has a very high IQ, there is no possible way in hell that could ever be true. And we know this because now they’re analyzing it.

In fact, Donald Trump was among the lowest out of all of the republican candidates that they ran through this program back during the 2015 primaries. Hillary Clinton was almost double Donald Trump’s level in the analytical thinking abilities, and yet America somehow looked at this man who was quite literally the dumbest person running for president and said, “That’s our guy. That’s the guy I’d like to have a beer with. That’s the guy I want making important decisions. That’s the guy I want in control of the nuclear codes.”

We picked the dumbest possible person out of that entire crop, and I know Hillary Clinton won the popular vote, but he won the electoral vote, and that’s what we got, a very much below average president with a very low IQ making decisions that he doesn’t understand. And according to this report, that he doesn’t even analyze because he can’t. This is dangerous for the United States. This cannot become the norm. We cannot just allow a below average, low intelligence human being to be making these important decisions about who gets health care, who gets a tax cut, what programs in the United States get funded, whether or not continue funding education properly. This is not okay, and yet Trump supporters believe that it’s perfectly fine that we picked the dumbest of the dumb to be the leader of this country.

We owe it to ourselves and to our children and to our neighbors and our friends to do better in 2020. Let’s not look at the dumbest guy up on stage and say, “Well, he talks like me. Maybe I should vote for him.” Use the person, choose the person that uses words that you maybe don’t understands, words that you have to go look up. Use the person with a good education, who speaks in complete sentences, who’s not up there bullying and insulting people because clearly it didn’t work that well in 2016.