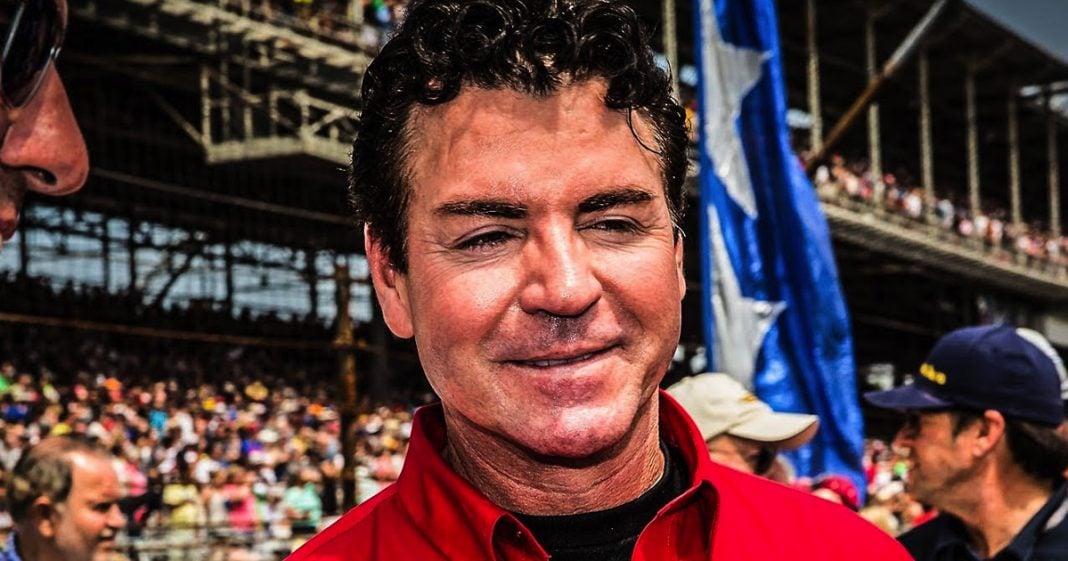 John Schnatter, the CEO of Papa Johns who appears in nearly all of his chain’s TV commercials, is blaming a massive drop in his company’s revenue on kneeling NFL players. Papa Johns is a big sponsor of the NFL, but it seems highly unlikely that a few men protesting police brutality could torpedo an entire pizza chain. Perhaps “Papa John” should look at his business practices before blaming others, as Ring of Fire’s Farron Cousins explains.

You may not know the name John Schnatter, but you probably do know him as Papa John, the CEO of Papa John’s Pizza. And earlier this week on a call with shareholders, he made it clear as to why his company is losing so much money in the United States. According to Papa John himself the reason his company is tanking right now is because of those pesky NFL football players who are kneeling during the national anthem.

That’s right. That is the official reason that Papa John Schnatter himself gave as to why nobody in this country wants to buy his pizza as much as they did a year ago. Well, here’s some unfortunate facts for Papa John that I think he needs to realize: His sales are down 24% over where they were one year ago. NFL viewership has declined 5% as to where it was a year ago. So those numbers really don’t correlate to one another. That doesn’t make up for your entire loss. Papa John is obviously, as anybody who has ever watched an NFL game understands, one of the largest advertisers for the National Football League.

He appears mostly in his own commercials usually with Peyton Manning by his side. Recently, he’s turned to Eli Manning but overall the guy likes to advertise his pizza. He likes to be seen in his advertisements. He wants people to know who he is. He wants to be the famous pizza guy. Well, nobody cares because we don’t care about you. We care about the fact of whether or not you’re selling a good product and more importantly, and I think this is why your sales are going down, they care if you yourself are a good person. You see, Papa John donated to the campaign of Donald Trump.

There’s a big story last year where he began cutting the hours of his workers so that he didn’t have to pay them health insurance and he was found guilty of wage theft and refusing to pay overtime to his employees. Sounds like the actions of a guy that’s less of a good hearted pizza man and more just a general piece of shit, which is what Papa John’s is and that’s essentially what they’re selling to the American public.

It’s not about NFL players protesting police brutality. It’s about you being a horrible human being and treating your employees like crap. You think you can boss around these NFL players just because they’re black? No, that’s not how it works. Didn’t work out too well for the Houston Texans last week either did it? But you go ahead and blame others for your own misfortunes, for your own failures in life, just like a responsible conservative would do. Aren’t you supposed to be the party of personal responsibility? No? I guess not when you can easily blame your own failures on a group of black people.