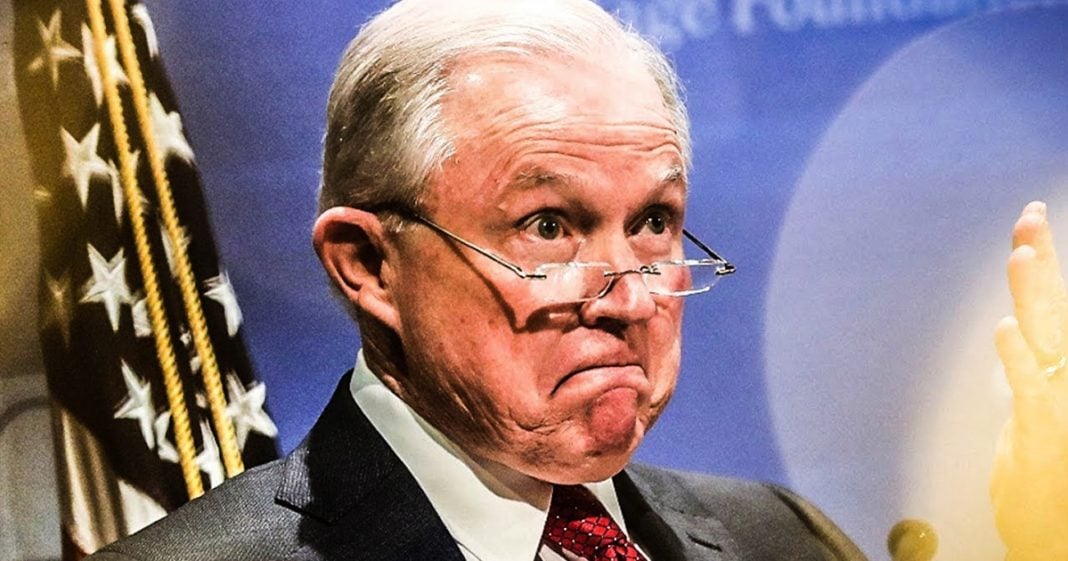 Part of the George Papadopoulos plea deal includes a passage about a meeting from March 2016 when Papadopoulos suggested meeting with the Russians. Jeff Sessions was present at the meeting and shut that idea down, but during his Senate confirmation to become Attorney General, he claimed that he had no knowledge of anyone in the Trump campaign ever meeting with or even suggesting meeting with the Russians. This is a massive problem for Mr. Sessions and will likely end up with him being removed from office, as Ring of Fire’s Farron Cousins explains.

Earlier this year during Jeff Sessions’ Senate conformation hearing to become Attorney General of the United States, Democratic Senator Al Franken grilled him extensively about connections between the Trump campaign and anyone basically in the country of Russia. During this, Jeff Sessions specifically said, “Senator Franken I’m not aware of any of those activities, I have been called a surrogate at a time or two in that campaign and I did not have communications with the Russians and I’m unable to comment on it.” Now, that was not necessarily the question that Franken had even asked him, Jeff Sessions voluntarily said that he had no communications with the Russians, he didn’t meet with anybody, he doesn’t know any of them, probably doesn’t even know where the country of Russia is, “I’m just that dumb,” is basically what Jeff Sessions was trying to tell us there.

Well, that statement alone was borderline perjury, because as it turns out, as we learned later, he had met with a Russian by the name of Kislyak twice during the campaign, so there’s one lie. However, this week another big lie that Jeff Sessions told during his Senate confirmation hearing has re-emerged, thanks in part to the plea deal by George Papadopolous that was unsealed this week. Here’s what happened.

In March of 2016, Papadopolous stood up at a meeting in which Jeff Sessions was present and said, “Hey, I have some connections over in Russia, they want to meet with members of the campaign. I think we should go for it, this sounds like a great idea.” Jeff Sessions to his credit, stood up and said, “No, we’re not going to do that. Nobody ever mention that to the president.” Or excuse me, wannabe president, at the time. So good job on Jeff Sessions. However, in his confirmation hearing, he did say that he is not aware of anybody within the Trump campaign whatsoever that had any communications with the Russians at all, which means he lied. He lied under oath, he lied during the confirmation hearing, because we now know for a fact, that Jeff Sessions was aware that members of the Trump campaign were attempting to set up meetings with the Russians through their Russian channels. So yeah, the at least attempted meetings happened, and Jeff Sessions was the one who shut them down.

So for him to come out in his line of questioning and say that nobody in the campaign had any connections over there that he knew of, was a lie, that is perjury. At this point, it’s really not a question of if Jeff Sessions perjured himself, it’s what are they going to do about it? The evidence is right there, I mean you can compare the plea deal to the video tape of Sessions entire testimony and see that there’s some pretty serious discrepancies there where either one side is not telling the truth, and I’m going to have to go with Jeff Sessions being the one not telling the truth at this point, because Papadopolous has already probably headed to prison, so he has no reason to continue lying any further.

Jeff Sessions needs to be removed from office, and I’m fairly confident that within … I say six months tops, Jeff Sessions will not be the Attorney General of the United States, but even six months is too long. At this point, with all of the evidence that we have, there is more than enough to remove him from office and come forward with perjury charges against Sessions. My guess is that the only reason that hasn’t happened yet, is because he’s probably involved in the Mueller investigation a little bit more deeply than most of us realize, and Mueller’s just waiting for the right opportunity to slap him with charges that are probably a little bit harsher than simple perjury.