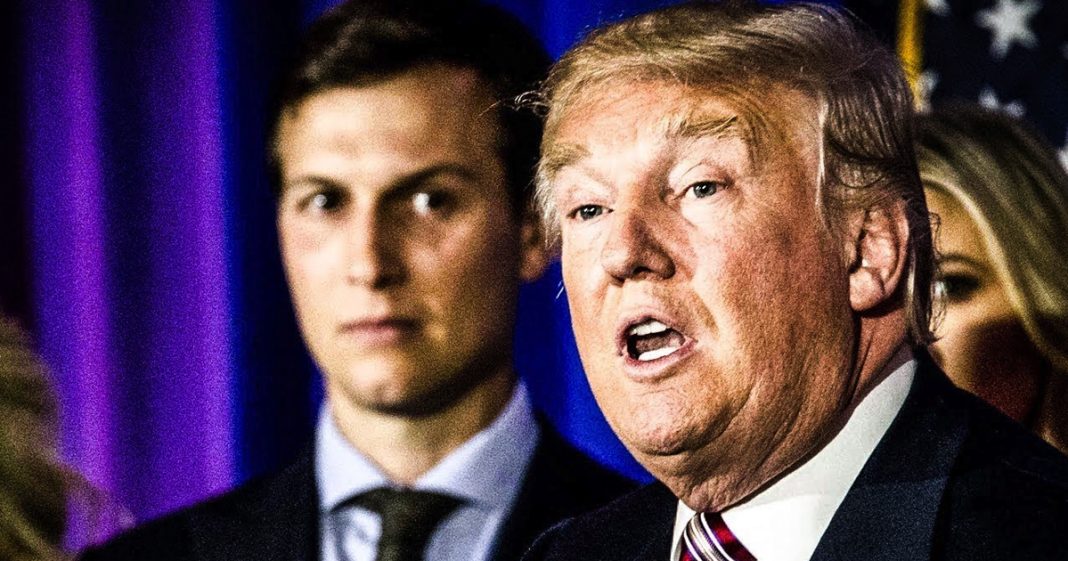 Reports are everywhere saying that Donald Trump is apoplectic about the indictments that were handed down on Monday, and those closest to him say that he’s beginning to turn on his allies in the White House. His latest target is Jared Kushner. A new report by Vanity Fair says that Trump is putting all the blame for the investigations squarely on the shoulders of his son-in-law, and Ring of Fire’s Farron Cousins explains why this is actually great news for Kushner.

Donald Trump has been fuming for the last few days, ever since the indictments by Bob Mueller were officially announced. Once he found out that it was Manafort and Gates, and then found out about the plea deal by George Papadopoulos, Donald Trump became even angrier than usual. According to sources within the White House and including a call that Trump made himself earlier this week to Steve Bannon, Donald Trump knows exactly who is to blame for this entire investigation. According to Trump himself, the person at fault here for all of the problems within the Trump administration is his son-in-law, Jared Kushner.

Donald Trump believes that the horrible advice Jared Kushner has given him as a White House Advisor is what has led to the entire Bob Mueller investigation. According to him, Kushner was the one who told him to fire Michael Flynn as National Security Advisor. He’s the one who told him to fire James Comey. He’s the one who was present at that Don Junior meeting back in June of 2016 with the Russians. Everything in Trump’s world that is going bad right now lays squarely on the shoulders of Jared Kushner. Sam Nunberg, who is a former Donald Trump campaign advisor who was fired, also says that it’s Jared Kushner’s horrible advice that got Donald Trump into all of these problems. Bannon has said it. Gorka has said it. Everybody agrees that Jared Kushner is the root of all the problems.

Now, here’s what’s great, and I hope Jared Kushner somehow pays attention to this. Everyone’s already blaming you, which means they’re prepared to throw you under the bus should anything happen to any one of them, which means you right now have all the leverage in the world. Rather than waiting to be thrown under the bus, how about you go volunteer to talk to Bob Mueller? Tell him what you know, perhaps in exchange for some kind of immunity on your part. You hold all the cards right now, Mr. Kushner, and you already see how the rest of the team is going to treat you going forward. They’re going to blame it all on you. They’re going to make sure that you’re the one who goes down for it, so why don’t you take them down before they have the chance to do the same to you?

Is it going to injure your marriage? Maybe. Unfortunately, that’s just a byproduct of marrying into a corrupt family. But it might keep you out of prison, because right now it’s really starting to look like either you or whoever you decide to roll on first is probably going to spend at least a few years behind bars. Why don’t you get the jump on them, stop being the fall guy for the entire administration, and start taking some of these people down by turning over whatever you have to Special Prosecutor Bob Mueller?