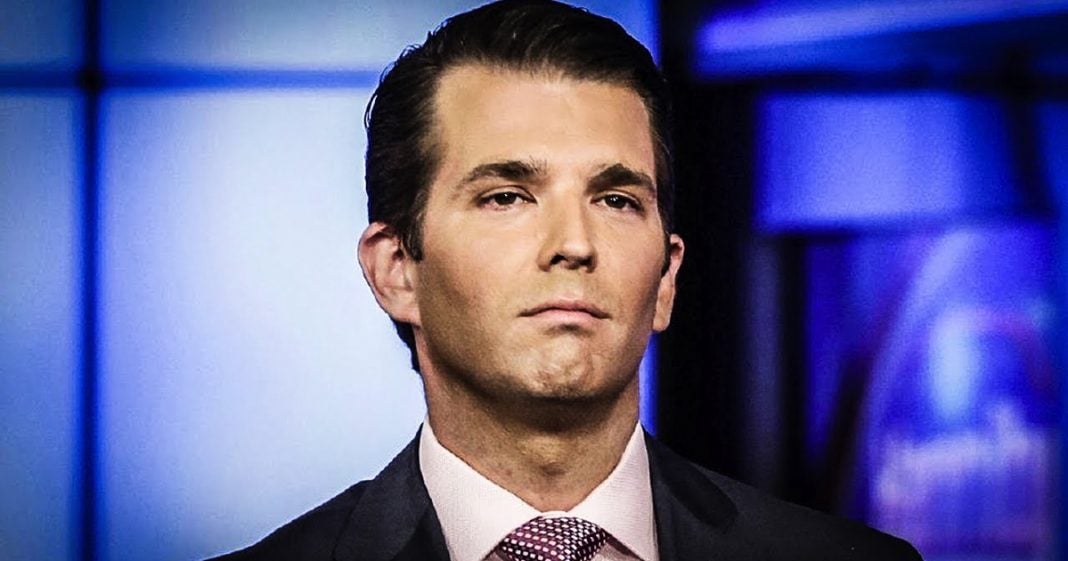 Donald Trump Jr tried to poke fun at liberals on Halloween by suggesting that he take away his daughter’s Halloween candy and give it to kids who stayed home. Twitter users quickly jumped all over Junior as a man who has been handed everything in his life and has earned nothing, and Ring of Fire’s Farron Cousins joins in on the action.

Donald Trump, Jr., on Halloween evening decided to try to make a political point by posting a picture of his daughter and her Halloween haul, and saying that he was going to take her candy away and give it to other kids who stayed home for the evening in order to teach his daughter about socialism and how socialism works.

Now, you see in the picture the little girl’s got kind of a sad face. She’s showing her candy bucket, and Trump decides that this is going to make the perfect photo opportunity to attack a basically political economic system that he does not quite understand, yet he has clearly benefited from his entire life.

Now, Twitter immediately fired back, and Trump, Jr., got roasted by everyone from casual Twitter users to J.K. Rowling, who got in there and got a really good zinger in on Trump saying that he should just take her candy and give her candy leftover from the great-grandfather, and then act like she earned it.

Now, the thing about Halloween candy that I’m sure everybody knows is kids go around to somebody’s house, they say “Trick or treat,” and they get free hand-outs. So it’s not even like he went and paid for this candy for her. It was given to her for free as a hand-out, which makes the whole socialism argument kind of weird at that point. But, more importantly, Trump, Jr., seems to forget that he is the kind of guy who hasn’t earned a single thing in his entire life. He was born as a millionaire, possibly as a billionaire, from the day he popped out of the womb. So what does he know about hard work? What does he know about sacrifice? More importantly, what does he know about helping others?

See, socialism isn’t about taking stuff from somebody who has more and giving it to somebody who has nothing. It’s about making sure that everyone has enough, that everyone not has an equal share, but has what they need to survive. And trying to use your sweet, little, innocent daughter as some kind of political puppet to prove a point about a political system you don’t understand is absolutely abhorrent and disgusting, but then again, so is Donald Trump, Jr., and the entire Trump family. At least the grown-ups at this point. I’m not going to say that the kids are disgusting.

But, again, Trump, Jr., has benefited from this kind of wealthy socialism for his entire life, as has his father, and his siblings, and everyone else in that family. They’re the last people on this planet who should give anyone a lecture about earning what you get.