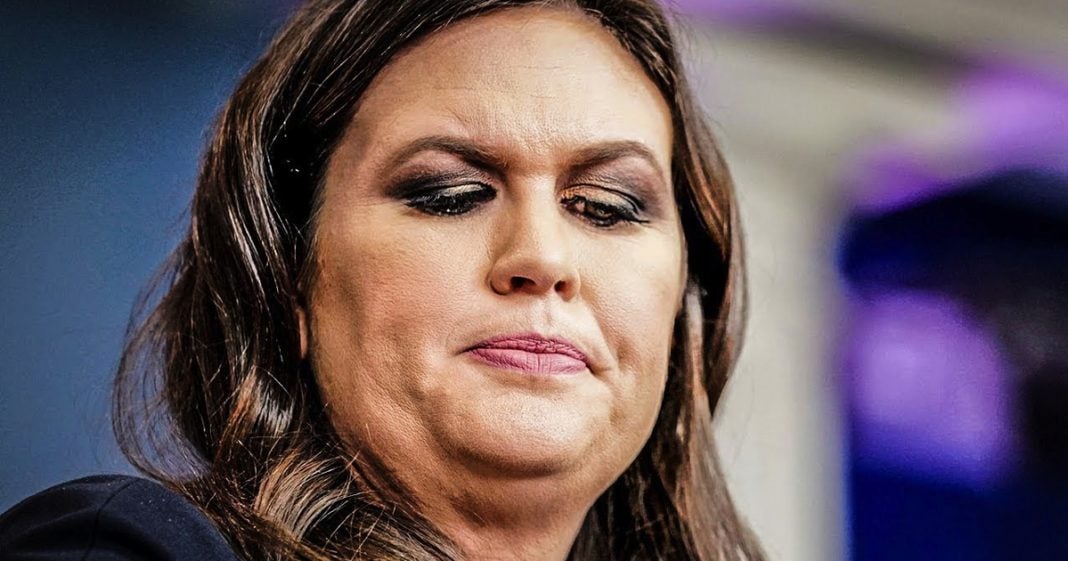 During her daily press briefing on Tuesday, White House Press Secretary Sarah Huckabee Sanders seemed to imply that President Kennedy and JFK were two completely different people (both of whom, along with others, she claimed were “flawed.) This was part of her response to the incredibly racist remarks made by Trump’s chief of staff John Kelly, and as Ring of Fire’s Farron Cousins explains, it could not have gone worse for Huckabee Sanders.

White House Press Secretary Sarah Huckabee Sanders has had a really, really bad week so far, and we’re only on Wednesday at this point. On Monday, she struggled to kind of justify the indictments against Manafort and Gates, and then on Tuesday she had a whole new set of problems to deal with after White House Chief of Staff John Kelly defended Robert E. Lee and said the Civil War could’ve been avoided with a simple compromise. In order to try to explain away John Kelly’s incredibly racist statement, this is what Sarah Huckabee Sanders had to say.

Sarah Huckabee Sanders: Look, all of our leaders have flaws, Washington, Jefferson, JFK, Roosevelt, Kennedy. That doesn’t diminish their contributions to our country, and it certainly can’t erase them from our history, and General Kelly was simply making the point that just because history isn’t perfect doesn’t mean that it’s not our history.

JFK and John Kennedy were both flawed individuals. They also happen to be the same individual and I don’t know that Sarah Huckabee Sanders understands that. Now, immediately after and even during this press conference, Sarah Huckabee Sanders got roasted online by people pointing out the fact that JFK and Kennedy were the same person, but it’s not just a slip of the tongue here. I can understand if she was going off the cuff and just accidentally named somebody twice by a different name. That happens. It happens to people left and right, smart and dumb.

Happens to everybody, but she keeps looking down as she’s doing her little spiel, keeps looking down at a piece of paper. It’s pretty obvious that she was reading this list of people. This was a prepared response because they knew she was going to get asked about the John Kelly thing, so they prepared the response for her. Somebody, whoever wrote this up for her, put JFK and Kennedy in there and none of the proofreaders caught it. Sarah Huckabee Sanders I have to imagine read through these responses before she went out there, and she didn’t catch it, so yeah, this isn’t just, oh, slip of the tongue, let’s make fun of her. This is a astronomically stupid move by a lot of different people within the Trump Administration.

I mean, when Sean Spicer was out there every day making an ass of himself, we thought, “You know what? It really can’t get much worse,” but then Sarah Huckabee Sanders came along. She has proven herself to be even dumber, even more incompetent than Sean Spicer was, and that’s what’s so hilarious at this point. Donald Trump once told us that he was only going to hire the best people, simply the best, but when it comes to the people running your communications department, I literally don’t think you could do any worse than the morons that you have had going out there every single day speaking on your behalf.