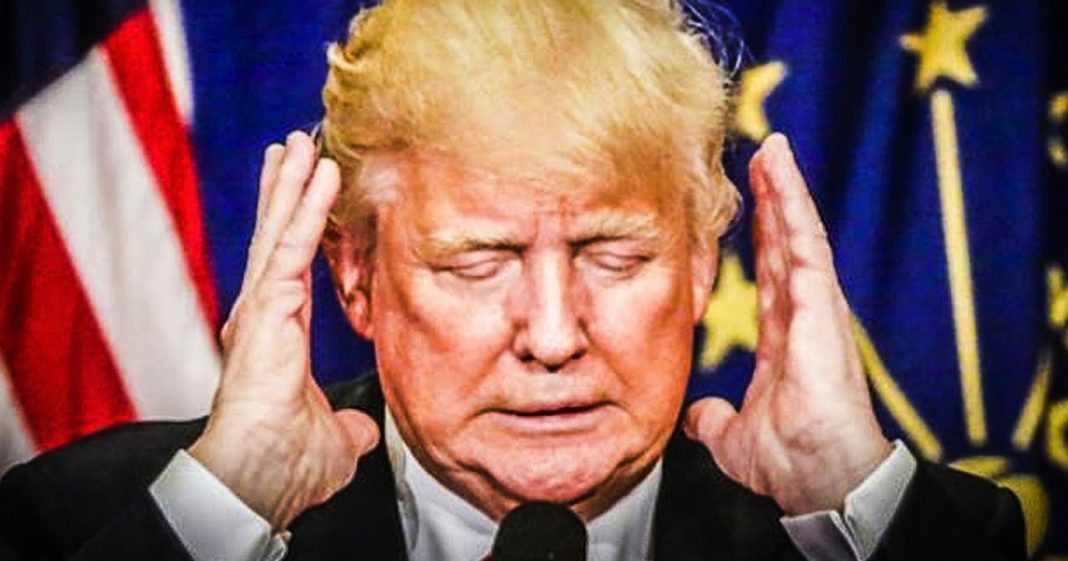 According to sources inside the White House, Donald Trump was roaming the halls on Indictment Day “fuming” with anger. Meanwhile, aides were left avoiding eye contact and doing their best to hide from the President out of fear over his anger. This is not normal. This man is dangerously unhinged and needs to go, as Ring of Fire’s Farron Cousins explains.

On Tuesday morning, Donald Trump finally decided to tweet some stuff out about the indictments and the George Papadopoulos plea deal that was announced on Monday. Donald Trump did, just like Sarah Huckabee Sanders did and tried to turn it all back around somehow on the Democrats as if Manafort, Gates, and Papadopoulos were all Democratic operatives in the mind’s of Republicans. So, that’s why the Democrats are going down.

But Monday, indictment day itself, the day all these revelations came out, according to sources within the White House, Donald Trump spent the day fuming, walking around the quarters. Aids, staffers, to the president were basically hiding in fear because they were worried about how the president was going to react if they had to go up and talk to him. According to Donald Trump’s lawyer, Ty Cobb, the president focused most of his Monday on presidential work. He just wanted to go in there and do his job and not think about the indictments. However, sources within the White House say just the opposite. Here’s the quote here, “Anger Monday was visible to those who interacted with him (Donald Trump), and the mood in the corridors of the White House was one of weariness and fear of the unknown.”

Now, we have talked plenty of times in the past because there have been countless reports in recent months, basically since the beginning of the Trump administration, talking about how White House staffers and aids, essentially, live in fear of Donald Trump. They do not know how he is going to react in any given situation. They know he is an explosive, volatile temper, and yesterday was probably one of the worst days that the president could’ve even imagined because not only did, basically, three of his former campaign staffers have to meet with police. But a new poll came out showing that his approval rating is lower than its ever been at 33%.

Overall, just a bad day for the president who enjoyed a lovely weekend the two days before that playing golf nonstop. So, yeah, when you go back to work Monday after a good weekend and find out that your buddies are going to jail and that most of the country hates you, I have to imagine you’re going to be pretty pissed off walking around the halls. However, these staffers who continue to talk about living in fear, talk about a man who has such a just anger problem, probably time for you to start talking to mental health authorities at this point. So that they can speak with Republican lawmakers so that they can maybe enact the 25th Amendment.

What’s happening with Donald Trump is not normal. Both with his presidency and with him, himself, as a human being. That’s not the kind of person we need in the White House. It’s dangerous for the future of this country. Those people that are closest to him, that see these kind of reactions to the news on a daily basis, they’re the ones that need to be speaking with Republicans in Congress and saying, “Look, this isn’t right. This isn’t normal. He’s threatening to do things. It’s time to remove him from office.” But if those people stay silent and only want to leak their stories to the press, we’re not going to make any progress on this. Donald Trump’s going to continue walking around the White House more and more pissed off as more and more of his friends go to jail, and his approval ratings continue to plummet.