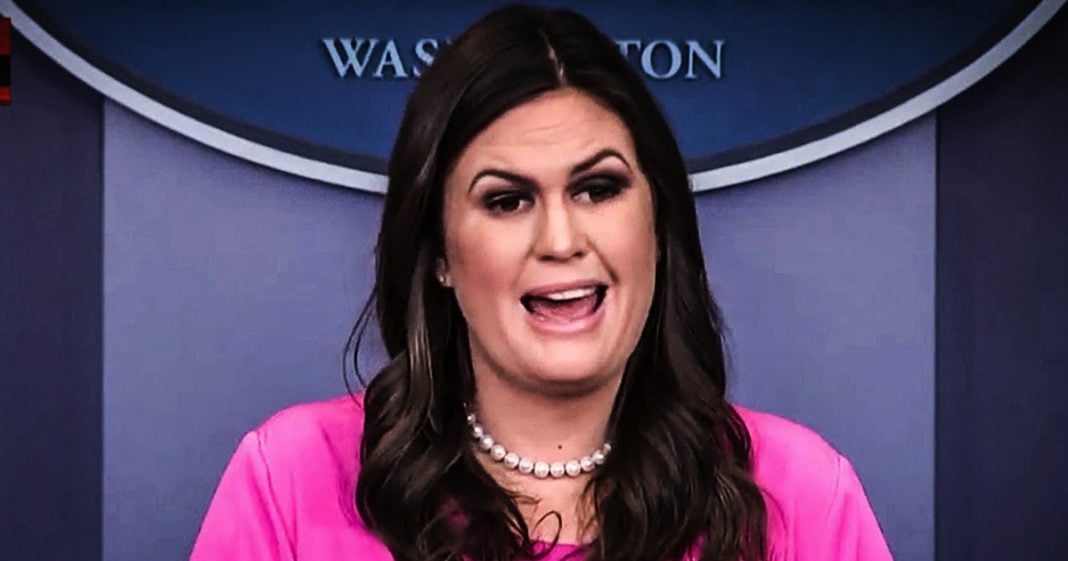 Sarah Huckabee Sanders is proving to be even more morally bankrupt and clueless than Sean Spicer could have ever dreamed of being. After the Mueller indictments were announced against Paul Manafort and Richard Gates, Huckabee Sanders gave a press briefing where she said that the indictments are bad news for DEMOCRATS. That’s quite a stretch for any rational person to believe, as Ring of Fire’s Farron Cousins explains.

Sarah Huckabee Sanders, following the announcement of the indictments against Paul Manafort and Richard Gates, had to give her usual Monday press briefing and, of course, people wanted what the White House was saying about the indictments. Sarah Huckabee Sanders basically did what you would expect her to do, and didn’t actually address the real elephant in the room and, instead, tried to deflect all of the attention onto something else. Take a look.

That’s right, folks, don’t look at the fact that members of the Trump campaign had to turn themselves in to the FBI yesterday. Don’t look at that, don’t focus on that. It’s all still about the Clintons and the Democrats and Obama and the Podestas. That’s the real collusion scandal because, somehow, in the eyes of Republicans, the Democrats colluded with Russia to lose the 2016 election. I’m not exactly sure how that logic works but, trust me, people who know nothing about politics are saying that today and yesterday, and for the last week, really. It takes a special kind of mental defect to think that any of that, any of this uranium story or any of the Fusion GPS, totally legal story, has anything to do with anything in the world right now.

Sure, the Podesta brother may get investigated. He may go to prison. I don’t care if he does, kind of hope he does. Same thing with John Podesta. But that’s not bigger than what’s happening with the Trump Administration. It wasn’t colluding with a foreign power for any kind of political gain, not like what the Trump Administration did, so I’m sick and tired of hearing people, especially coming from Sarah Huckabee Sanders, saying that we should be focusing on the Democrats.

Huckabee Sanders has proven in her short time as press secretary that she is somehow more morally corrupt and incompetent than Sean Spicer. She has risen to the level of number one liar of the Trump Administration in a way that Sean Spicer could never have dreamed of. No wonder that guy got kicked out of the Administration in favor of Sarah Huckabee Sanders. That is some world class mental linguistic gymnastics that she is doing, that somehow convinced the American public that we should still be pissed off at the Clintons. That is who the Trump campaign is still running against, and that is who Republicans still view as Public Enemy Number One. This is a calculated deflection on the part of the White House, but it’s just one that anybody with even half a brain shouldn’t be buying into right now.