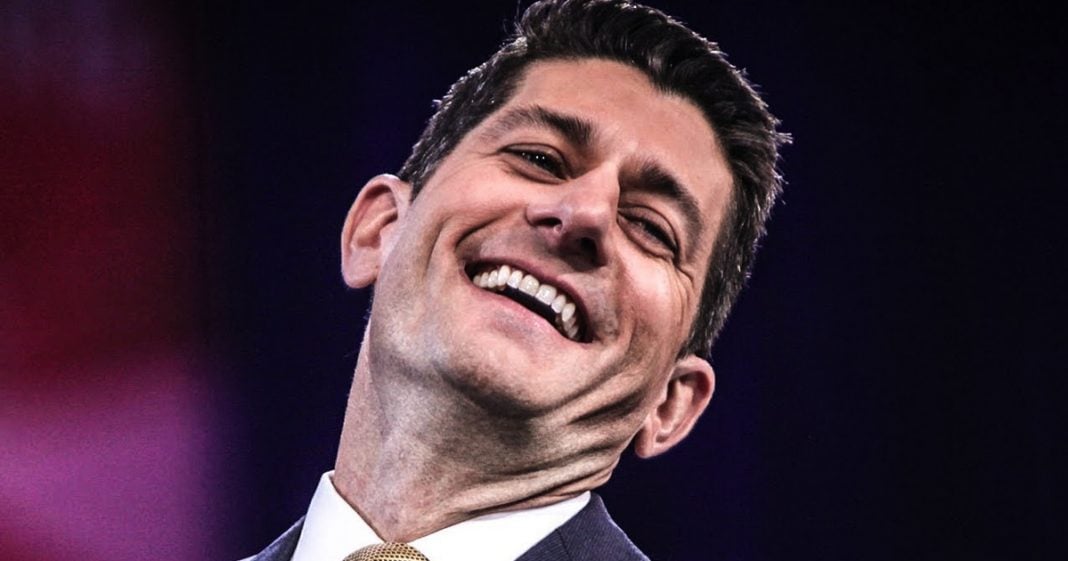 Paul Ryan isn’t going to let the fact that his Party is being indicted left and right get in the way of his true passion, which is screwing over the American public in order to give billions of dollars to the already-wealthy. Ryan told reporters on Monday that he wouldn’t let the indictments distract him from enacting his dangerous tax cuts for millionaires or any of his other anti-consumer goals. Ring of Fire’s Farron Cousins discusses this.

Now, that’s admirable to an extent, or at least it would be if his agenda wasn’t to screw over average American citizens. So basically, Paul Ryan in this interview tells us that he is not going to let these indictments, he is not going to let the fact that Republicans are being arrested distract him from trying to screw over as many hardworking Americans as possible, just so that he can give a little extra money at the end of the year to millionaires and billionaires and corporations who destroy our environment. That is what Paul Ryan wants to do, and come hell or high water, he is going to get it done.

But again, Paul Ryan’s entire agenda, the entire Republican agenda, let’s be honest here, is about screwing over average American citizens. In this radio interview, Paul Ryan specifically wanted to talk only about tax reform, which is a fancy word that they’ve come up with to basically just mean trickle down economics because that is exactly what they’re pushing on the American public.

This isn’t reform. This is raising taxes on low income Americans, lowering taxes on millionaires and billionaires, doing away with the estate tax and lowering the corporate tax rate. Poor people pay more. Corporations and the wealthy get more back. Programs like Medicaid and Medicare are going to lose funding in order to pay for those massive tax cuts. Why? Because idiots like Paul Ryan think that these corporations are going to turn right back around and parlay most of that money back into these Republican campaigns so that they can get reelected and keep enacting these tax cuts and so on and so forth.

That’s basically the life cycle of the Republican slug that has captured Washington DC. These people are insects. They do not have any empathy. They do not have any caring or concern for the American public. They just care about who’s going to fund their next campaign. If they have to strip healthcare from millions of people in this country in order to get that, they’re going to do it. If poor people have to pay even more money in taxes each year just so Republicans can have more campaign money, they’re going to do it. They don’t care and yesterday during that radio interview, Paul Ryan made it crystal clear that no matter what happens, hell, DC could be on fire, and Paul Ryan’s still going to try to get in that office to cut taxes for the wealthy, to screw over the American public. Because that is the only thing that that man knows how to do.