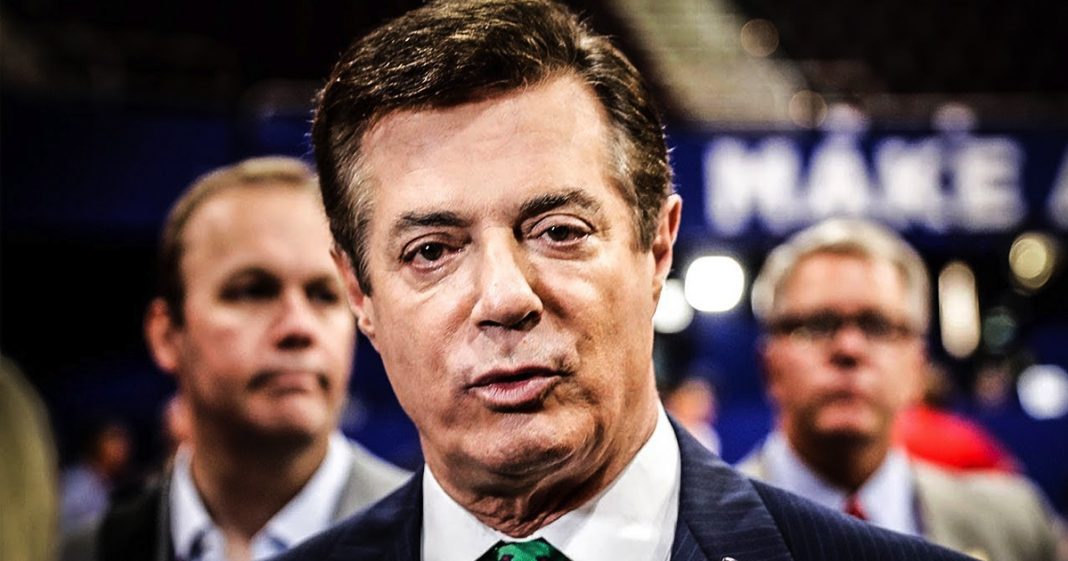 Paul Manafort, the former chairman of Donald Trump’s presidential campaign is officially the first to be indicted by special prosecutor Robert Mueller in the ongoing probe into collusion between the Trump campaign and Russia. Manafort’s associate, Rick Gates, has also been indicted along with Manafort. Of all the potential targets, Manafort is a big one with the most obvious connections to shady foreign governments, as Ring of Fire’s Farron Cousins explains.

Late Friday evening, it was announced that indictments had been sealed and delivered in the Bob Mueller special prosecutor probe and a potential collusion between the Trump campaign and Russia. So, the nation waited anxiously over Saturday and Sunday, and then today we finally found out who the lucky individual was to win the first indictment from Bob Mueller. That person just happened to be Paul Manafort, Donald Trump’s former campaign manager. Along with Manafort, Rick Gates, who served basically as Manafort’s right-hand man during the campaign, was also served an indictment, and the two men turned themselves in to the FBI.

At this point, here is what happens. The special prosecutor, the people investigating this, obviously they do have enough evidence to bring the charges against Manafort and Gates. That does not indicate that these men are, in fact, guilty. It just means there’s enough evidence to go ahead and charge with a crime. Some of those crimes include money laundering, tax evasion, and conspiracy against the United States. That’s the big one because that’s tantamount to treason at this point.

But what they’re hoping to do by going after Manafort and going after Gates is to get them to talk, to reveal further information that is going to lead to even more indictments down the road. Manafort has done some really shady things in the past. He has been involved in the Ukraine. He has very strong ties to the Russian government dealing with them, accepting money from them and the Ukraine and other Putin allies. So, that’s obviously one of the paths with which this investigation moved forward.

More things are going to develop over time. We’re going to find out a little bit more here and there. Once the full indictments are released, we’re going to be able to read through those and find out exactly what is going on, what the evidence is, and what the likelihood of a conviction will be at this point. But, again, these indictments are mostly to get these two men to squeal in order to get more information about more co-conspirators because you got to have more than two people to have a conspiracy against the United States, even though both men have been charged with this. It is worth noting that Donald Trump himself could be listed as an un-indicted co-conspirator, though that remains to be seen.

Again, we’re hoping these two men start singing. We’re hoping they turn over everything they’ve got, reveal everything they know, and then indictments keep coming. Because, personally, I would love to see Jared Kushner go down in all of this. I think he is the kind of guy who not only knows everything that went on, but also the kind of human being that if you apply even the slightest pressure to him, he’s going to start squealing and revealing every single thing that he knows. Hopefully, Manafort and Gates are going to give Mueller enough evidence to go ahead and go ahead and charge Kushner with a crime as well.

Again, this story’s still developing. Hopefully, we’re going to know some more things as the day drags on, as the week goes on, but at least right now this big alleged nothing burger from the Trump administration has turned into two men being forced to turn themselves in to the FBI.