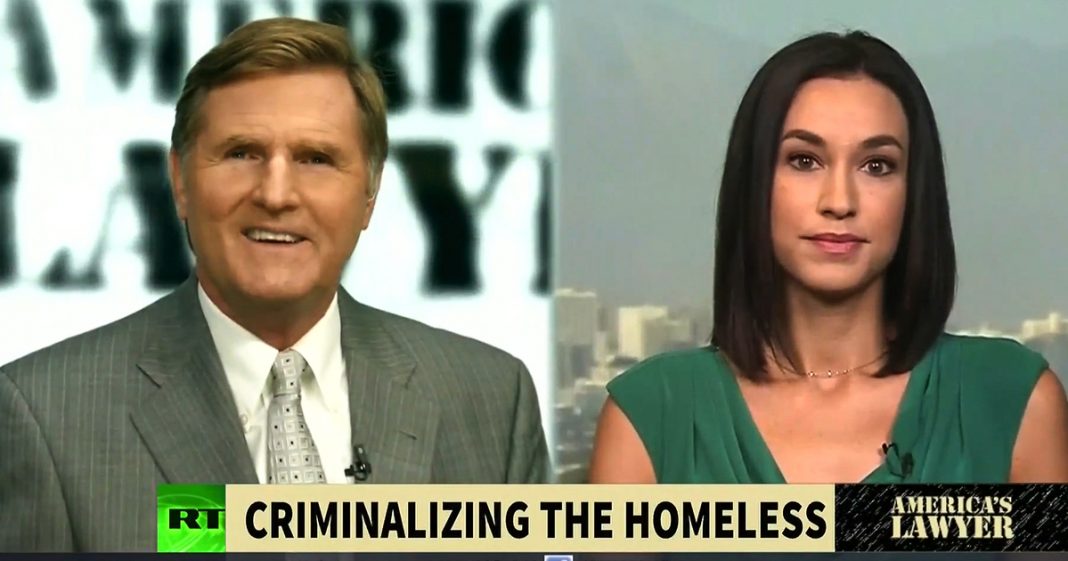 Via America’s Lawyer: Mike Papantonio talks with Brigida Santos about why San Diego California has been arresting its homeless population.

Mike Papantonio: San Diego is in the spotlight for its treatment of the homeless after a man was arrested for sleeping in a tent in the city streets. Authorities say he violated California’s illegal lodging law, which charges homeless man decided to challenge in court, saying that they’re ignoring his side of the story, and others like him, who have nowhere to go.

Joining me to talk about this is America’s lawyer correspondent, Brigida Santos. Brigida, these stories are popping up all over the country. The man arrested, Richard Stevenson, what do you know about this particular story and this case?

Brigida Santos: Mike, Richard Stevenson is a homeless man in San Diego, as you said. Now, he has been found guilty for two counts of illegal lodging and encroachment for sleeping in his tent 15 minutes beyond when the city’s municipal code allows people to sleep in public.

Now, he was arrested back in April, but he has just been found guilty by a trial. Now, he’s been sentenced to two years of probation and he’s also been ordered to stay away from the downtown San Diego area where he had pitched that tent in the first place, Mike.

Mike Papantonio: What’s the story with the state’s lodging law, Brigida? What were the arguments to enact this law in the first place in a state that many sees as progressive, friendly to the poor? Certainly we think of California in that way. What is your take on this?

Brigida Santos: So California lodging laws state that any person who lodges in a public or private place, building, structure or vehicle, without the permission of the owner, is guilty of a misdemeanor, which would be disorderly conduct.

So you have people like Richard Stevenson, who have absolutely nowhere to go, and you have these laws, which are really trying to make it so the public doesn’t have to see them. They’re completely out of sight. They’re being forced to leave areas, sidewalks, public spaces, neighborhoods, in order to just make it look like the problem doesn’t exist.

But in California, we’re consistently looking at the symptom of homelessness and trying to tackle that, rather than trying to tackle the causes, things like finding more affordable housing. We’re in the middle of a housing crisis here, so that’s one reason why people are becoming more homeless. We’re also not tackling mental healthcare, addiction, domestic abuse, and even climate change, which has now caused many fires that are forcing more people onto the streets, Mike.

Mike Papantonio: Brigida, the argument is that homeless people don’t need tents, they don’t need tarps, they don’t need any kind of makeshift shelters for that matter. Does that argument have any ground? I mean, if we take a look at states around this country, we’re seeing this happen more and more, you’re seeing some constitutional tests to it.

There is a way that you can deal with this problem in a way that certainly is more compassionate. And it simply comes down to tax payers saying, ‘Okay. This is right out in front of us. We see it; this is real. We’ve got to have an alternative plan. We can’t just arrest people because they don’t have a place to sleep.’

Does this argument that, ‘Gee-whiz, this was totally unnecessary and this man could have found somewhere else to sleep, because we have alternatives all available all over California.’ What’s your take on that?

Brigida Santos: This absolutely has no grounds in reality. In fact, right now in Los Angeles, where we have more homeless people than anywhere in the state and in the country, it’s about 100 degrees. So if you’re saying that these homeless people are not allowed to seek refuge and create their own space for shade and protection from the elements, then that’s absolutely outrageous and inhumane.

Now, police argue that violently crime goes up when they do not crack down on these tent laws, but again, they’re cracking down on people when they simply have no ability to provide refuge for these people. Now, in this case, this particular one regarding Richard Stevenson, it took a judge, an activist, a police officer, public defender, to find him a space at a homeless shelter. So people should not be getting fined because the state simply can’t help them.

Mike Papantonio: Well, my take is on it, oddly enough, is you’re in the Ninth Circuit there in California. It’s a very progressive, appellate circuit. But the argument here does come down to what we call police powers: health, safety and welfare. The state makes the argument that, ‘Gee-whiz, we’re not doing this to be mean, we’re doing it because it’s a health issue, it’s a safety issue. And so we have to do something and this is the best we can do to clean up the streets, is to criminalize the poor and sweep all this under a rug as evidence of homelessness in San Diego continues to grow.’

It’s seen by any group, if you take a look at it, we really know what this is about, but the argument sounds seductive. The argument is, ‘Gee-whiz,’ the constitutional argument is that, ‘We have a very wide expanse of police powers: health, safety and welfare. We can do fairly extreme things because we’re looking at the general population. We’re having to waive this individual’s rights over the rights of everybody.’ That’s typically the way these things are argued on a constitutional level.

What’s the state’s Civil Rights Department have to say about this, Brigida?

Brigida Santos: They say that these are inhumane. And going to what you’re talking about with the police, again, this is an excuse, because when you look at the money that goes into the budget for tackling homeless people … For example, here in Los Angeles in 2015, 100 million dollars was given to the state to tackle homelessness. 87 million of that 100 million went to law enforcement to crack down on homeless people.

So they can say all day that this is about really helping people, but again, it’s about filling up their own budgets here, Mike.

Brigida, thank you for joining me. As usual, great coverage on this story.