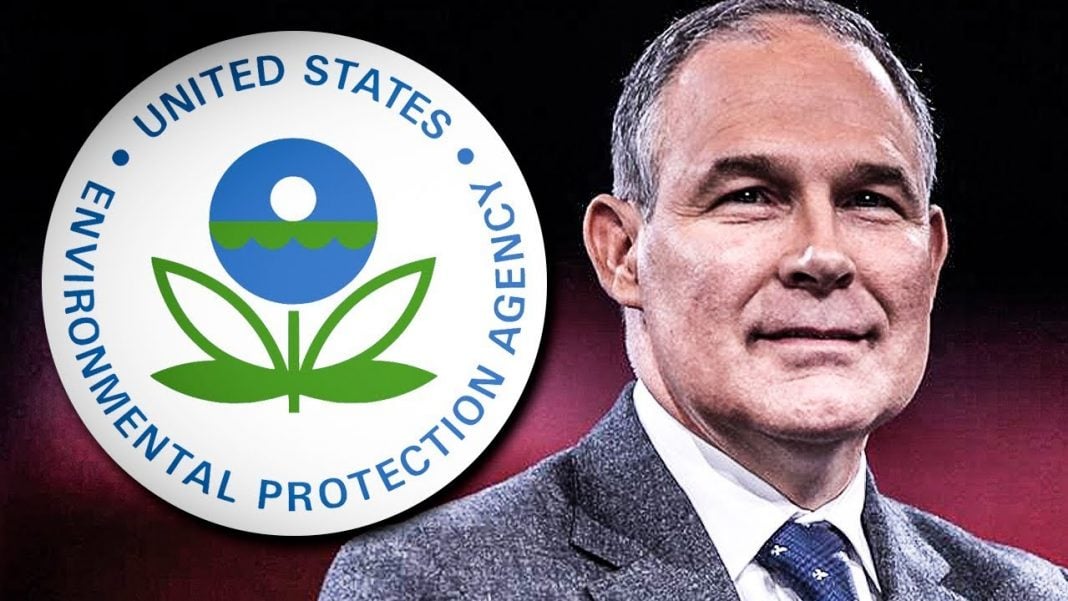 The EPA recently refused to allow agency scientists from speaking at an event in Rhode Island. Before that, they scrubbed the phrase “climate change” from even more government websites. Prior to that, they buried agency reports that showed how catastrophic and urgent the threat of climate change actually is. The list goes on and on, yet the media and the public don’t seem to care. Ring of Fire’s Farron Cousins explains why climate change has to become a major issue in this country before we run out of time.

Earlier this week, the EPA decided at the last minute that they were not going to send any scientist from their agency, or allow any scientist from their agency, to go to a climate change conference in the state of Rhode Island. Now this is something that they had done in the past, Scott Pruitt at the last minute said, “You know what, our scientists are not going to be allowed to go to this, that’s the end of the story.”

About a week ago, story broke, saying that the EPA was scrubbing the term climate change from even more government websites than it had already taken the term away from. Because earlier this year, as most people remember, Scott Pruitt came in and took the words climate change off a lot of government websites, then went through last week, tried to finish off the job. Beyond that, we also know that Scott Pruitt has spent $25,000 of taxpayer money to soundproof a room for him to meet with people so that nobody can overhear what’s going on.

Here’s what’s happening today at the Environmental Protection Agency, and it’s starting to get really frustrating and angering, that nobody is talking about this. There is a direct attack on science in the United States today, and it is coming from the Environmental Protection Agency itself. Their decision to not send these scientists to that conference is a direct attack on science. The American public has a right to know what’s happening to our planet, to our country, to our ground, to our air, to our water. And the EPA is actively trying to prevent the American public from understanding what’s happening. They’re trying to prevent them from having access to the facts. That is a direct assault on science. Furthermore, a recent government accountability office report shows that the United States is spending on average, $35 Billion every year for the last 10 years, so $350 Billion total, to combat climate change related weather events. Floods, droughts, fires, storms, and this comes at a time as our Republican-controlled Congress is actually trying to cut hurricane relief for the areas in the United States that have, were devastated in the last month and a half.

We’re not allowed to understand science, the EPA’s trying to do away with science. They’re trying to kick scientists off their advisory boards and replace them with industry insiders to make the decisions for the agencies. So we’re not allowed to know what’s happening, and then when the bad things do happen, like hurricanes Harvey, Irma, Maria, they don’t want to pay to clean it up. The costs ultimately do fall on the United States taxpayers, but again, nobody’s talking about this, or at least not in any kind of meaningful way. And that is one of the main reasons why climate change in the United States still remains a political issue, rather than a social issue. It is a partisan issue, and it shouldn’t be. It can’t be. If we want meaningful action, climate change has to be something that is accepted by both the left and the right. And among the voters it actually is. American voters, a majority of them, regardless of party, agree it’s a problem and agree the government should do something about it.

It’s our elected officials who have the divide. The majority of Republicans in Washington, D.C. serving in the House or Senate, deny the existence of climate change, or claim that we should do absolutely nothing about the problem of climate change. And that’s where we’re at today. The media won’t talk about it because it doesn’t get big ratings. It’s not sensationalistic enough. But this is without a doubt, the most important issue facing the United States today. Why? Because it’s the only issue that cannot be fixe by the next administration. Everyday, we lose time. We don’t get that back.

If the Trump administration, or the Republican-controlled Congress, if they come out with a bad tax plan that tanks the economy, the economy can bounce back. We can fix that in the next administration, or maybe the next eight years. It’s going to be painful and it’s going to hurt, and it’s going to be bad, but it’s fixable. If we get into a war, we’re going to lose lives, and it’s going to be a tragedy. But we can end a war. We can’t go back and fix the planet after we destroy it. You know, if the sea levels start to rise, three, four, five inches, we can’t undo that in the next administration. We’re talking about hundreds, or possibly even longer than that, years to undo the damage. Our lives, the lives of our children and grandchildren and great-grandchildren will be long over before we’re able to undo the damage, and that is why climate change is the most important issue, yet for some reason, the EPA doesn’t want to take it seriously anymore, the Republican Party as a whole doesn’t want to take it seriously anymore, and the media could not care less that the planet is dying because of the activity of human beings.