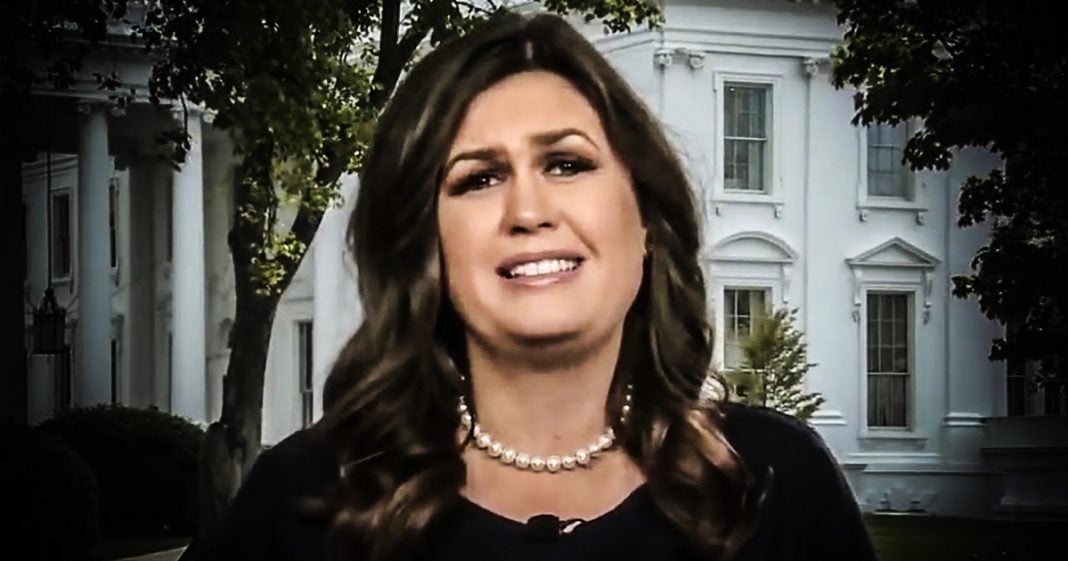 If Republicans had a “safe space” it would undoubtedly be Fox News. Fox has allowed Republicans to get away with all sorts of lies for decades, so it was rather surprisingly on Thursday to see the network call out White House Press Secretary Sarah Huckabee Sanders for lying about the ongoing Mueller investigation. Ring of Fire’s Farron Cousins discusses what happened.

Conservatives usually like to view Fox News as their safe space. It’s the place they can run to when all other media outlets are just being a little too darn mean and asking them tough questions that they either don’t know the answer to or that they simply do not want to answer. So it’s very remarkable that Sarah Huckabee Sanders, the White House press secretary, went on Fox News with host Bill Hemmer on Thursday of this week where Hemmers did not let Sarah Huckabee Sanders get away with her lie about the ongoing Russia investigation. Take a look.

Bill Hemmer: The other matter’s the uranium deal, from eight years ago. He was asked about this yesterday on the South Lawn. He said it’s as bad as Watergate. How is this uranium deal as bad, if not worse, to paraphrase his words, than Watergate?

Sarah Huckabee: I think it certainly could be. The fact that they were working with a foreign government taking in millions of dollars through the Clinton Foundation and giving over such a large percent age of that uranium while she was Secretary of State. There’s just a lot of things that need to be looked at here. I think a thorough review needs to take place, and that’s something way above my pay grade, but I think that there are a lot of causes for concern, and I’m glad that some folks in the media are finally talking about the real collusion with Russia, and that is with the Clinton campaign and with the DNC on both of these matters.

Bill Hemmer: Does he have confidence in Bob Mueller as special counsel?

Sarah Huckabee: I certainly think he has confidence that they’re going to close this up soon …

Sarah Huckabee: … and this is further evidence of why that should take place.

Bill Hemmer: Why do you say, “Close it up soon?”

Sarah Huckabee: I think we are seeing more and more evidence that shows, look, they’ve been working on this and investigating this for well into a year through various committees. Every day, we find out more and more details about why the President has been right all along, and why the Democrats have been wrong all along, and I think that each day we’re getting closer and closer to closing the loop on this on our front, and sadly for the Democrats, I think it’s only expanding for them.

Sarah Huckabee: I think it’s based on fact, the fact that there has been no wrongdoing by the Trump campaign, and a lot of the reporting that we’re seeing coming out day in, day out with the collusion that you’ve got-

Bill Hemmer: Just to be clear now, no one from the Department of Justice have told you … or anyone at the White House … that it should be wrapping up soon. I just want to be clear on that.

Sarah Huckabee: I have not spoken with anybody at the Department of Justice on that front, but I think we’re seeing that it is getting closer to conclusion.

What Bill Hemmer did in that clip is laudable. That is very good for a Fox News host to ask a questions such as where did you get this information that you’re spewing on this network, to which Sarah Huckabee Sanders had to admit, I just kind of made it up. Nobody within the Department of Justice told her that this is what was happening. Nobody involved in the investigation has told her, “Yeah, Trump’s totally vindicated. We’re going after Hillary now.” That’s just a Republican talking point that is not based anywhere near reality. However, Huckabee Sanders’s claims here are something that other Conservatives, Republicans, Trump supporters, and even Trump himself have jumped all over. On Friday morning, Donald Trump was tweeting out the fact that the Russia investigation has completely vindicated him and is now only targeting Democrats.

Well, unfortunately for Republicans, that’s not true. That is not at all what is happening here. What’s happening is that the investigation, as investigations do, has evolved. They’re also looking into that uranium deal, I guess, according to reports. We don’t know for sure if they’re doing that ’cause it doesn’t seem that there is really any illegal activity there, that’s mostly Republicans wanting an investigation on it. But they are looking at, I believe Tony Podesta, the brother of John Podesta. They’re looking at who financed the dossier but more importantly, they’re still investigating Donald Trump and Jared Kushner and Don Junior and Paul Manafort and every member of the Trump administration. You don’t convene a grand jury if you don’t think you’re gonna get a conviction or at least an indictment. That happened long before any of the involvement of the Clinton campaign or the DNC. Anyone who says right now that either Trump is vindicated or that the Mueller investigation is targeting Democrats is echoing baseless Republican talking point because that is not what has happened here.

I find it annoying that I’m having to come out and actually defend Hillary Clinton at this point. I’ve never been a huge Hillary Clinton fan. I preferred her over Donald Trump, absolutely, but the fact that she is taking so much crap right now based on absolutely nothing is insane. Trump is still being investigated. Trump Junior is still being investigated. Manafort is likely gonna be indicted, and Jared Kushner is probably right behind Manafort on the list of indictments. Sarah Huckabee Sanders and the members of the Trump administration and the Trump supporters and other Republicans in Congress are absolutely lying about any turns this investigation has made. Donald Trump is still being investigated. Sarah Huckabee Sanders is still a liar. For the first time in a long time, Fox News felt it was their duty to call out this administration for lying to the American public.