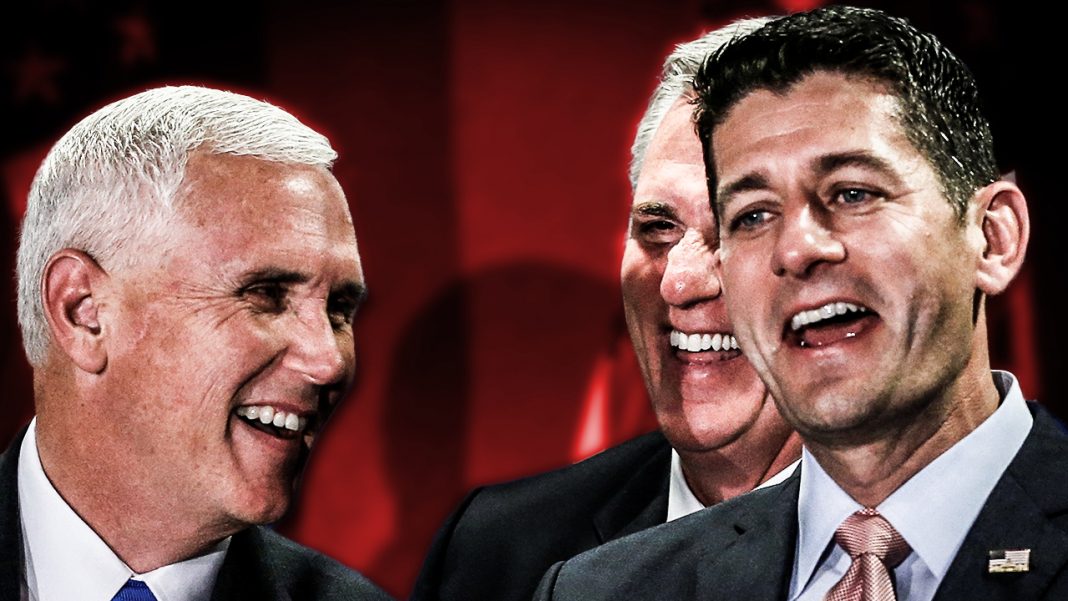 On Thursday, House Republicans managed to pass a budget bill that would hand corporations and the wealthiest Americans more than $1.5 trillion in tax cuts while cutting social safety net programs for the needy. Medicare and Medicaid will be taking a huge hit in order to give the wealthiest Americans even more money. Ring of Fire’s Farron Cousins discusses the disastrous bill that Republicans are cheering.

On Thursday in the House of Representatives, by a vote of 2016 to 2012, Republicans passed part of their budget plan. That includes 1.5 trillion dollars in tax cuts for corporations and the wealthy elite. And in order to pay for those massive tax cuts, part of that money is going to come in the form of reduced spending for government social safety net programs like Medicaid and Medicare, the programs that help provide health insurance, healthcare coverage for the elderly and for the needy in the United States.

So to put it in its simplest terms, what happened Thursday in the House of Representatives is that they decided to take money away from people who desperately need it in order to have some kind of healthcare coverage in this country, and they gave it to the people who are already millionaires or billionaires. They stole from the poor to give to the already wealthy. That is what these Republicans, 216 of them, did on Thursday in the House of Representatives. It should be noted 20 Republicans actually voted against this disastrous piece of legislation, and House Minority Leader, Nancy Pelosi, actually referred to it as basically a shakedown of the American public.

Not a single Democrat voted in favor of this budget. Why? Because maybe they have a little bit of a heart, or maybe they understand that trickle down economics, which is exactly what this is, does not work. We are stealing from the poor to give it to the wealthy in the hope that they’re going to use that money to create jobs instead of, I don’t know, buy another mansion, or buy another Bentley, or buy another home overseas, another vacation house. They’re not going to spend it to make more jobs for American citizens because they don’t need to. They have enough already.

If they had wanted to make more jobs to expand their businesses, they would already do that and a tax cut isn’t going to change that. You would have to be mentally unstable or mentally impaired in order to think that this plan is actually going to work. The only reason these 216 Republicans did this, proposed it and voted for it, is because it benefits their donors. That is 100% what this issue is about. It is not about creating jobs. It’s not about giving the middle class a tax break because their taxes are actually going to go up, as are taxes for bottom income earners. It is about giving a tax break to the wealthy elite who fund Republican campaigns. Anyone who tells you otherwise, is absolutely lying to you.

History has shown us time and time again, that tax cuts for the wealthy don’t work, yet that is exactly what Republicans are telling us is going to happen. That us exactly what Sarah Huckabee Sanders and Donald Trump are telling us is going to happen, but history tells a different story. And at least 20 Republicans had enough sense in the House of Representatives to join every single Democrat, and say, you know what, this is a scam. This is unethical, and this is downright one of the dirtiest things we have seen from the Republican controlled Congress in decades. You’re liars and you’re cheats, and you’re doing whatever you can to protect your wealthy donors, while screwing over the American public. And if they didn’t think that when they defected and voted with the Democrats, then shame on them, because that is the only rational way of thinking at this point.

It seems extreme, but at the same time, so is screwing over the poor and the elderly, just so you can give your campaign donors an extra hundred thousand, or maybe even an extra million, or five million every year, because you’re hoping, not they’re going to create jobs, but that they’re going to parlay that money back into your next campaign.