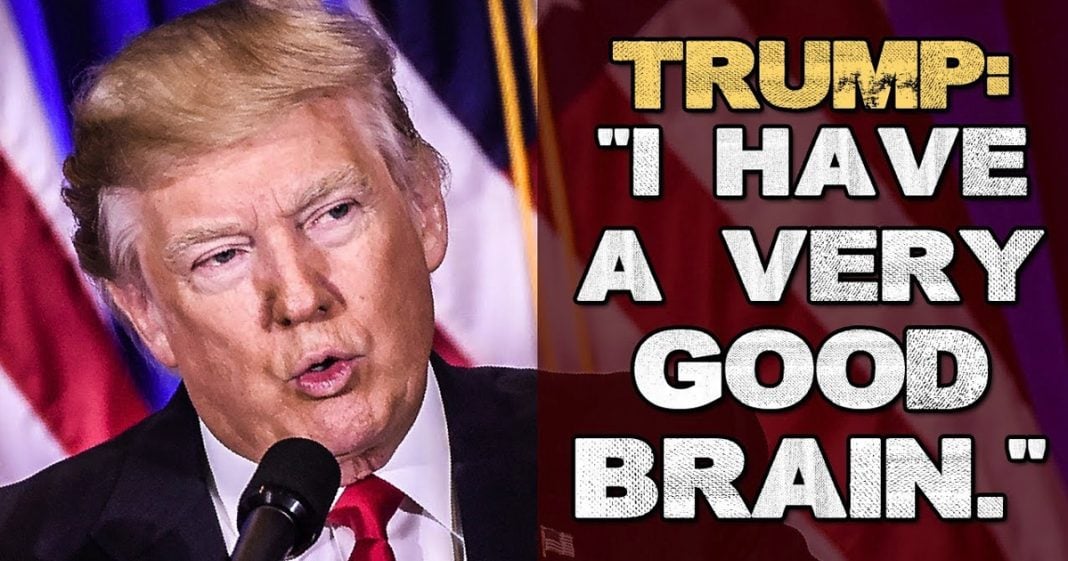 Citizens and leaders all around the globe have been questioning Donald Trump’s mental stability more and more in recent weeks, which is one reason that Trump felt the need to remind reporters once again this week that he is a “very intelligent person” who went to an Ivy League college. Trump can make all the claims that he wants, but his public persona and leadership skills point to a man who is far below average, as Ring of Fire’s Farron Cousins explains.

On Wednesday, Donald Trump felt the need to once again remind the world that he’s a very intelligent person. On the South Lawn of the White House, when reporters approached him, they essentially were asking about his lack of civility, both on Twitter and in person, when dealing with members of his own party and members of the opposition party.

Here is what Trump replied to those reporters’ questions with. He said, “Well, I think the press makes me more uncivil than I am. You know, people don’t understand. I went to an Ivy League college. I was a nice student. I did very well. I’m a very intelligent person.”

Okay, first and foremost, Mr. Trump. If you are, in fact, a very intelligent person, you don’t have to go around reminding people of that, because your words and actions will do the talking for you. Second of all, did you ever get around to challenging Rex Tillerson to that IQ test? Did that ever happen? Because I am dying to know the results of that.

Furthermore, this is about the third or fourth time in just the last 18 months that Donald Trump has had to come out and remind people that he is a very intelligent person. He’s got a very good brain. Those were his words, “a very good brain.” At one point, he told us that.

No, no you don’t, and I don’t know how to really sugarcoat that any better. You’re a very stupid person, Mr. Trump. How do we know this? Well, because we can listen to you, because we can watch you. We can see how you act and react in certain situations, and you have never done a single thing as President or candidate or, hell, even as a businessman that would indicate that you have any kind of intelligence that would make you stand out from the rest of the country.

Now, I’m not saying there’s something lacking in your intelligence. I’m just saying you’re probably, at most, very average. I would like to go a little further than that, but I’m going to keep it civil here. Regardless, Trump continues to insist that he is a very intelligent person. Why?

Most likely because he personally feels that he is lacking in that particular mental arena, so he feels the need to constantly, not necessarily reassure the public or the press, but reassure himself. That is a common psychological tactic. He repeats something so many times, not because he wants others to believe it, but because he himself wants to believe it. I think that is actually what we’re seeing here. When you look at it that way, it’s actually a very sad situation for this very poor man, who understands that he is not a smart person, that he is very much average, in every sense of the word, yet he wants to be more.

It doesn’t matter where you go to school. You can still be an idiot or a psychopath or a genius either way. Stop trying to convince the world that you’re an intelligent person by just saying you’re an intelligent person. You want us to think you’re smart? Clean up your Twitter feed. Stop attacking people on Twitter who disagree with you, and most importantly stop acting like such a dumb ass at every possible opportunity.