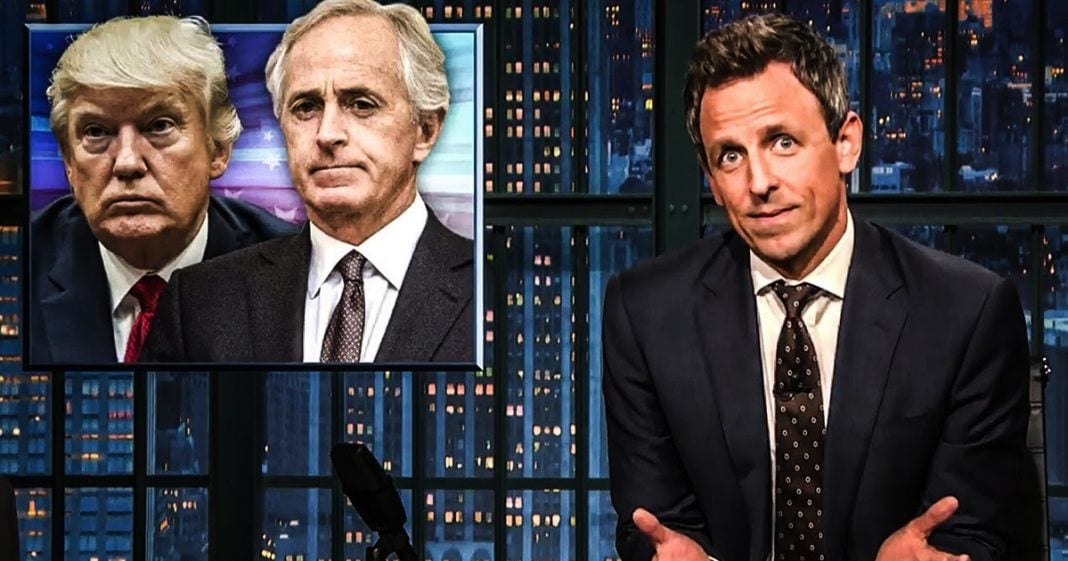 During a recent segment on Late Night, host Seth Meyers discussed Trump’s continuing feuds with members of his own party, specifically Republican senator Bob Corker. While Corker laments that Trump has not changed his ways, Seth Meyers explains why Trump will never ever change his ways. Ring of Fire’s Farron Cousins discusses the many ways in which Meyers gets the issue 100% correct.

Donald Trump has been feuding with a lot of prominent Republicans in recent weeks, John McCain, Bob Corker and, most recently, Jeff Flake. A lot of these Republicans have finally decided to speak out because they’re mad, they’re upset, and they’re confused about the fact that Donald Trump has not changed his personality or his ways since becoming President.

While it is foolish for these people to believe that Donald Trump himself would change, we once again have to turn to late night TV hosts in order to get a really, just spot-on analysis of why Donald Trump will never change. That is exactly what late night host Seth Meyers did earlier this week. Take a look.

Seth Meyers: Corker campaigned with Trump in July after many of Trump’s most grotesque comments, like his call for a Muslim ban or his claim that Mexico is sending rapists to the U.S., and yet Corker is now acting almost as if he’s surprised that Trump hasn’t completely changed his personality at the age of 71. In fact, he seems to enjoy the theater of fighting with people. On Sunday when he was asked on FOX News about his ongoing feuds with Arizona Senator John McCain and Corker, Trump actually insisted that fighting with members of his own party who think he’s deranged is somehow good for him.

Maria Bartiromo: Honestly, the feuding with Senator Corker, I think there’s a personal thing going on between you and Senator McCain. Do you worry that this bickering and feuding gets in the way of your agenda?

Seth Meyers: That’s right, Trump thinks it helps when people call him crazy. ‘It changes the subject from what an asshole I am.’

That was probably one of the best analyses of why Donald Trump will never change that I’ve seen, and it’s something that a lot of people in this business and in the media have not talked about. So far, Donald Trump’s brash personality, his feuding with other members of his party, has worked out quite well for him. Is it going to continue that way? Probably not. When you start to alienate all of those people in the Senate who are essentially protecting your job from the 25th Amendment, eventually it’s going to backfire and possibly remove you from office, which is the best case scenario most of us are hoping for.

Again, the media, since day one of the Trump Administration, has been waiting for that presidential pivot. They’ve told us on several different occasions, “Now he sounds presidential,” only for him to come out a few minutes later, say something incredibly stupid or harmful or hurtful, and then they have to walk back those comments. Then a month later, they’re back at it again: Look, now he’s presidential, now he dropped some bombs over in Syria, that’s presidential. Oh, now he’s threatening and insulting Kim Jong-un on Twitter? Yeah, that’s not presidential. Sorry, we were wrong.

Seth Meyers nails it. Trump’s not going to change. He’s not ever going to be presidential, and the media and the Republicans and anybody out there still thinking about whether or not or they support Donald Trump, please understand that the man is who he is. He’s not going to change. He’s not going to become presidential. He’s not going to be the person that you want him to be. He is the person that you elected him to be, and that is a complete jackass who is completely uncivil. He is a sexist, racist, admitted sexual assaulter and yet, for some reason, there are still people in this country, still elected officials in Washington, D.C., who think that maybe one day in this mythical future that they have, Donald Trump is going to come out, look nice, speak in a respectful tone and suddenly start acting like a president.

Seth Meyers is absolutely correct. That day will never come. If you think it’s going to come, then I would suggest starting to pay a little bit more attention to what Donald Trump has said and done in the past and compare it to what he’s doing today. If you start to look back and compare things, you’ll understand that there has not been a single pivot, there hasn’t been a presidential moment. Hell, there hasn’t even been a decent moment that we’ve seen from this man since he first announced that he was running for President.