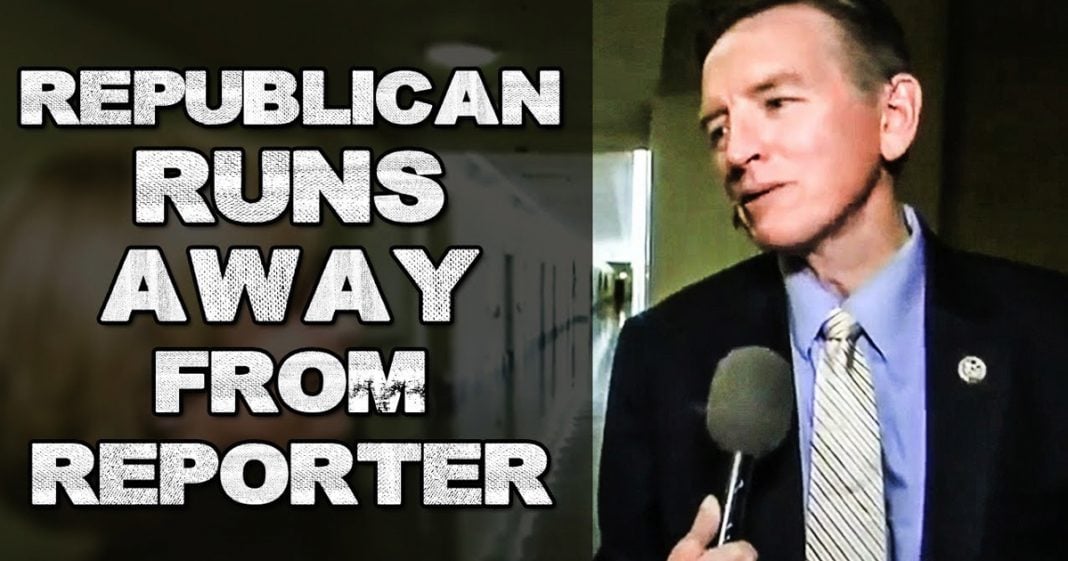 Republican Congressman Paul Gosar has been pushing some wild conspiracy theories recently, and when a CNN reporter finally got the chance to question Gosar about his claims, he decided to yell at the reporter saying “You’re fake news” before running away down the hallway. This is the kind of behavior that Trump has normalized since becoming President, as Ring of Fire’s Farron Cousins points out.

Republican Representative Paul Gosar from Arizona is not necessarily a household name. However, considering some of the unhinged beliefs that this man holds, he is someone that people in this country need to be paying attention to.

That is exactly why CNN has, for a very long time, been trying to get him to agree to an interview, so they could ask him questions about some of these crazy beliefs, specifically his belief that the white supremacists that marched in Charlottesville was a false flag operation actually carried out by liberals. During several other interviews, including one with VICE News, Gosar has said that he believes it’s possible that the Charlottesville white supremacist rally was, in fact, a false flag operation funded by George Soros, in order to make Republicans look bad.

CNN was tired of Gosar continuously declining their invites for interviews, so they tracked him down in the halls of Congress, where they had the following exchange.

Randi Kaye – CNN: You had said that the Charlottesville White Nationalists March was created by the left, carried out by an Obama sympathizer. Do you still-

Paul Gosar: I think you better go back and recheck that. I said, “Wouldn’t it be interesting to find that?” I did not say that, so go back and retool that.

Randi Kaye – CNN: OK, what makes you think that though that that’s even possible? What proof do you have, if any?

Randi Kaye – CNN: You also said that it’s possible that the billionaire investor George Soros was behind this whole thing.

Paul Gosar: Like I said, go back and take a look …

Randi Kaye – CNN: We’ve taken a look at your comments, and that is what you said.

Paul Gosar: That my proof will be coming. Check my website out.

Randi Kaye – CNN: Your proof will be coming. It’s all been debunked.

Paul Gosar: It’s not been debunked, absolutely not debunked whatsoever, so stay tuned.

Randi Kaye – CNN: The conspiracy theory that you have put out there has been debunked.

Paul Gosar: It has not been debunked. Look at what CNN has talked about with what’s going on with the Clinton administration right now with the dossier, hardly an aspect in regards to debunked. You’re not real news. You’re fake news.

Randi Kaye – CNN: Sir, everything you’ve said has been debunked. Why are you continuing to put this out there?

Paul Gosar: If you want to do more due diligence, check out my website. You’ll be surprised.

OK, first of all, the Representative there basically ran away from a CNN reporter, yelling, “You’re fake news.” Then you can hear someone else in the clip, I’m assuming a member of his staff, also yelling, “You’re fake news.” Why are they fake news? Because they were asking him questions. They were asking him to clarify something that he said and has claimed that he has evidence. Rather than explain his evidence or give people answers, he turned the whole thing into a plug for his website. “Go check out my website. Go check out my website. We’ll have more later.”

No, you have no proof, because you’re absolutely crazy. This was not a false flag operation. There was no evidence whatsoever to suggest that. You’d have to have some kind of very severe mental disability in order to think that that is what actually happened. I’m willing to bet that you probably do. If we took you in for an MRI or a CAT scan, I guarantee you, we’d probably find some kind of anomaly going inside of your head.

But this whole fake news nonsense has got to stop. This reporter was simply asking him to clarify a statement that he made, and his response was to yell, “You’re fake news,” and run away like a little coward, because he got called out for his lies. That’s what happened here, folks. It’s not that he didn’t want to divulge the information. It’s not that he wanted to get more traffic to his website. It’s that he got called out for his lies, because he didn’t think the media was going to do their job, because usually they don’t. But in this instance, they did. And they followed through, and they asked him the questions that needed to be asked.

CNN basically was out there trying to say, “Look, if you say something crazy, we’re going to come and track you down and ask you to clarify so that the entire public either understands how insane you are. Or maybe you’re going to drop some knowledge on everybody that we didn’t quite know.” In this case, it was CNN showed the world how crazy Representative Paul Gosar truly is.