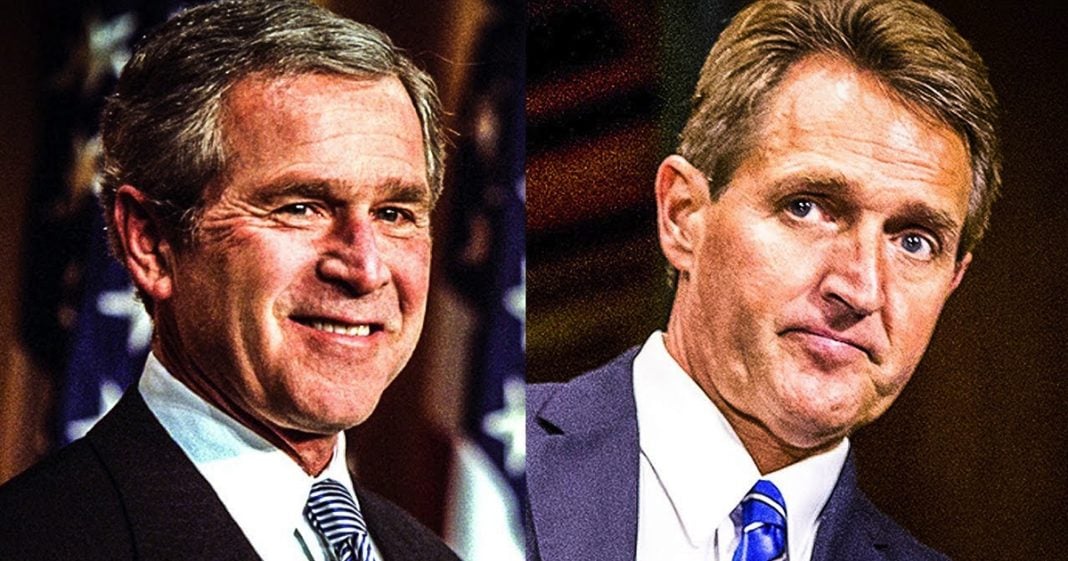 Many Republicans have come forward recently to admonish or outright reject the presidency of Donald Trump. And while the media is heaping praise on men like George W. Bush and Jeff Flake, they completely ignore the fact that the agendas of the dissenters are no different than those of Trump. We have to stop forgiving these Republicans of their past sins just because they don’t like Donald Trump, as Ring of Fire’s Farron Cousins explains.

Donald Trump has not been getting along with well pretty much anyone since he became president. But in the last week or so, some Republicans have been speaking out more and more against Donald Trump specifically Bob Corker and Jeff Flake, two Republican Senators who have now said, “You know what? Trump has destroyed this party so much that we’re not even going to run for reelection. Just last week we had former President George W. Bush come out where he gave a speech talking about the fact that we can’t get sucked into the bigotry and the hatred and all that. He didn’t mention Trump by name but everybody knew what he was talking about because the media was buzzing with praise for George W. Bush taking down Donald Trump without ever having to say his name.

Media was praising Bob Corker. Praising Jeff Flake for having the courage to stand up to Donald Trump and say, “You know what, enough is enough.” Well you know what? Enough is enough. And I am sick and tired of the media, of Democrats, of Republicans, of everyone praising these mad men for doing something decent once in their lives. You know let’s not forget. George W. Bush by every definition is a war criminal. He authorized the torture of detainees around the planet. That’s illegal, remember?

Remember when those pictures from Abu Ghraib surfaced? Remember the pictures from Iraq, Guantanamo Bay, all those allegations? All of that? The things that Barack Obama should have prosecuted the administration for but didn’t? Yeah, I’m not going to praise him no matter what he does. The thousands upon thousands of American soldiers that died in a war based on lies. Yeah, not going to praise him just because he thinks Trump’s a jerk. Most people think Trump’s a jerk.

Same thing goes with Jeff Flake. A climate change denying, anti-science, pro-corporate Republican who once in his life had enough sense to say I don’t like Donald Trump. And now we’re going to treat these people like they’re saints. Like they should have monuments built to them in this country. This is insanity folks. Most people in this country don’t like Donald Trump. That doesn’t make every one of them a hero. It doesn’t make them good people. It just means that they have enough sense to recognize a threat to this country when they see it.

Even some of the worst people in this country can recognize things like that. We have to stop with this deification of people that come out and speak out against the president just because they’re also Republicans. George W. Bush is horrible person and a horrible president. Jeff Flake has been a horrible senator. Bob Corker, horrible senator. They’re all in favor of these anti-consumer pro-corporate policies that screw over average Americans and give everything away to major corporations, fossil fuel companies and the banking industry.

They do not deserve any praise whatsoever. Furthermore, quitting, resigning, not running for reelection is not heroic. Its’ basically saying you give up. You’re not going to continue fighting against Donald Trump who you allegedly don’t like even though all of these people who’ve spoken out against him have pretty much voted for almost every single cabinet appointment he’s made and voted in favor of almost every single piece of legislation that he’s proposed.

So I don’t see where the disconnect is between the media and reality, but it’s getting sickening. Stop praising horrible people just because they don’t like Donald Trump. That doesn’t redeem them. That doesn’t forgive them of their past sins. All it does is show that occasionally every now and then they have a brief moment of lucidity where they understand that Donald Trump is a threat to this country.