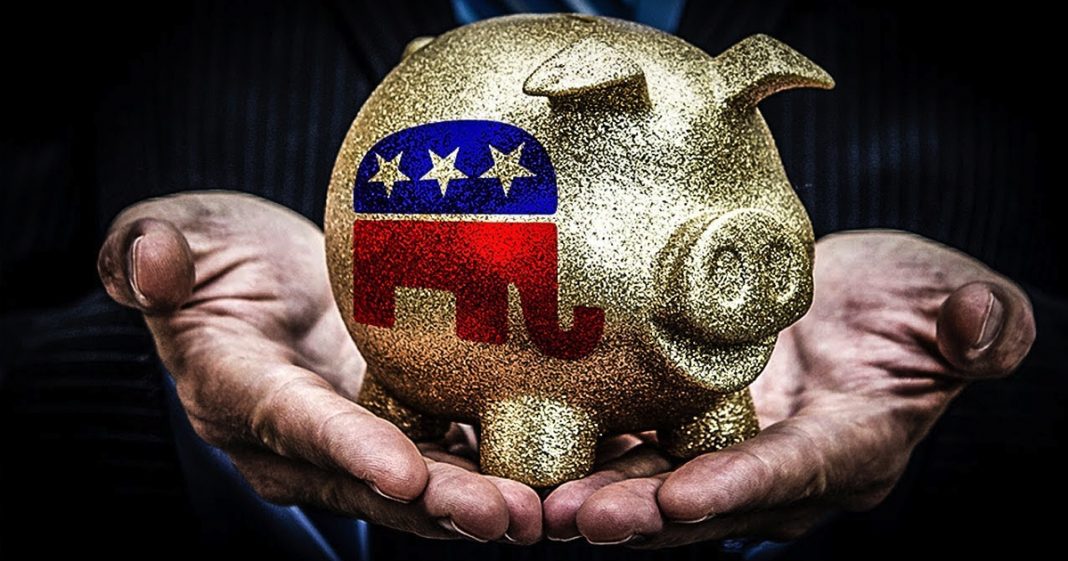 As Americans were headed to bed on Tuesday evening, Republicans in the U.S. Senate passed legislation that overrode a rule from the Consumer Financial Protection Bureau. The rule that is now gone had prevented banks from using arbitration agreements on unsuspecting consumers in order to prevent their customers from being able to file class action lawsuits against banks when they break the law. This new rule will allow banks to get away with far more crimes, as Ring of Fire’s Farron Cousins explains.

Late Tuesday night, as most Americans were headed off to bed, the Senate was still hard at work trying to strip you of your constitutional rights. Specifically, the Senate was taking aim at a rule by the Consumer Financial Protection Bureau that prevented banks and credit card companies from slipping, what’s called, arbitration clauses into their contracts, which takes away your right to sue them in court, when they eventually screw you over.

Now, in a 50 to 50 tied vote, they came to a stalemate on whether or not they could repeal this rule by the CFPB, and so Mike Pence, vice president had to come in, he was the tiebreaker, and he was the one who agreed and made it official, that yes, banks and credit card companies can use arbitration clauses, even if you don’t realize you’re signing them, because they do not want you to be able to sue a bank when they screw you over.

Here’s what this means. Arbitration panels are usually a panel of anywhere between one and sometimes up to five arbitrators, who hear a case from a plaintiff and their lawyer, and the defendant and their lawyer, in a private room, and you basically just argue in front of this group, they make the decision and that’s final. Allegedly, what Republicans and corporations tell us, is that this frees up the court system for other things. But here’s the thing, usually in these instances, it is the corporation that gets to choose the arbitrators on that panel, so they get to choose their friends, their buddies, the people they work with all the time, the arbitrators that they constantly hire and keep feeding money to. The plaintiff in these arbitrations wins less than 20% of the time.

Here’s what else it means. Arbitration is far more costly for consumers than it is for corporations, because you still have to pay all of those attorneys fees to recover such a minute amount of money. The goal here is to limit class-action lawsuits brought by consumers against corporations, in this case specifically banks and credit card companies. Why? Because they know you won’t do it. That’s the bottom line here, they know you’re not going to go hire a lawyer to go to arbitration to fight over a bank that was taking $2 a month from you when they shouldn’t have been.

Nobody wants to go to court and try to recover $24. The cost of hiring a lawyer for just a few minutes is going to exceed that. That’s why we have class-action lawsuits, so not everybody has to go out, pay hours upon hours of attorneys fees, show up in court, pay the court fees. We form them all into a class, we sue together, then everybody gets their checks in the mail without ever having to go to court. You get your money back, the corporation pays, everybody goes on with their lives. But not with arbitration, because if you think about it, when we have banks that get accused of charging excessive overdraft fees or improperly assessing an overdraft fee of, let’s say it’s $2 a month from you, so at the end of the year you’re out $24, but here’s the catch, they may have done it to 10 million people, so you’re out $24, your neighbor’s out $24, but overall the bank is up $240 million, because again, they did it to 10 million people.

We’ve seen that with companies like AT&T overcharging people $2, $3 a month, but they’re doing it to 20 million people a month, but you can’t sue them because of the arbitration clauses. And last night Senate Republicans said, “You know what? To hell with American consumers, to hell with the United States Constitution that says you have a right to take people to court. We’re going to give a massive gift to corporations that’s going to save them millions upon millions of dollars every year, give them the green light to go ahead and break the law,” because they know that consumers cannot afford anymore to hold them accountable for stealing from them.

We have seen too many crimes from the banking industry over the last 10, 15 years, and now Republicans in the Senate, even those anti-Trump Republicans, who everybody’s been praising recently, came out late last night while you were sleeping and said, “To hell with these people, let’s go ahead and essentially give away the bank, by giving everything to the banks.”