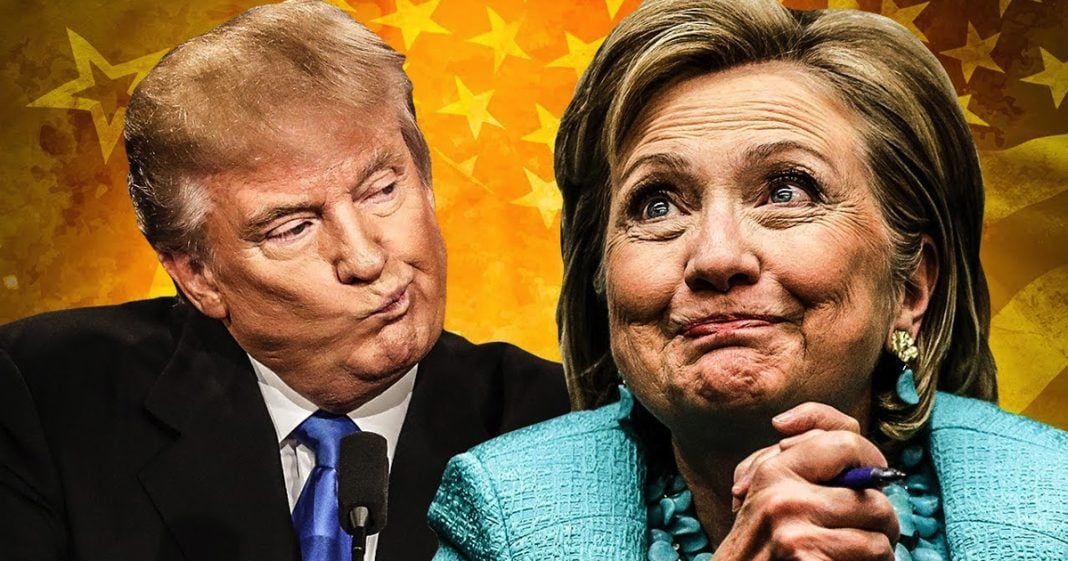 A new report by The Washington Post has revealed that the dossier on Trump put together by former British intelligence official Christopher Steele was, in fact, funded by the DNC and the Clinton campaign. But that funding only came after the firm that hired Steele lost their original funding for the project that had been coming from Republicans. The big question at this point is whether or not any of this even matters, and Ring of Fire’s Farron Cousins explains why it likely doesn’t amount to much.

According to a new report from the Washington Post on Tuesday evening, it was the Clinton campaign and the DNC itself that helped fund, basically pay for, that Christopher Steele Russian dossier about Donald Trump and his alleged golden showers and many other very important claims in there.

Here’s the thing: We actually knew earlier this year. The New York Times had reported that Democrats had indeed funded this particular report, so the new Washington Post revelations were not that groundbreaking. The only difference is that the New York Times had reported earlier this year that Democratic donors had specifically funded the dossier, whereas the new Washington Post report says no, it was actually people within the Clinton campaign, specifically Clinton campaign lawyer, Mark Elias.

Another thing that we found out was that, initially, this dossier was actually funded, Fusion GPS, the group that hired Christopher Steele to do this, was originally funded by Republicans in an attempt to basically stop Trump from running for office. Once Donald Trump secured the nomination, the Republicans thought, well, not much we can do at this point. We’re not going to fund it anymore, so the Democrats then stepped in and said, well, hold up, we still want this, so they took over paying the bills.

At this point, we actually do have both a consortium of Republican and Democrats who funded this information to try to take down the Trump campaign. Furthermore, with the exception of the golden shower accusation within the dossier, most of the claims that have been made from the dossier have, in fact, been confirmed. For example, the fact that a Russian diplomat working in D.C. was actually a spy for the Russian government. That has been confirmed along with several other claims made in the dossier.

Right now, Republicans all over the country are freaking out, saying this is some kind of treasonous activity, we knew the Democrats were behind it, they’re the ones who faked this. But hold up, nobody said anything about this report being faked. Nobody said that the claims made in here were not accurate or well-researched. In fact, that is one of the things that Bob Mueller, special prosecutor, is actually looking into.

As I just said, a lot of the claims have already been confirmed. Funding opposition research is something that all major campaigns do in the United States. They used an American company, Fusion GPS, so there’s no kind of collusion thing like there is with the Trump Administration. Essentially, this new Washington Post report tells us a lot of things that actually, when you think about it, do not matter. It does not change the validity of some of the claims made within the report. It does not prove any kind of illegal activity on the part of the DNC or the Clinton campaign, and it doesn’t vindicate Donald Trump’s claim last week that the Democrats, the FBI and Russia were somehow behind fabricating the dossier because, again, so far we haven’t been able to confirm or deny that anything in there was fabricated.

Republican needs to calm down a little bit. They haven’t been vindicated in any of their claims. All they know now is that, yeah, the Democrats funded it because that’s what campaigns do. I don’t want to come across as an apologist for the DNC or the Clinton campaign but, technically, legally speaking, based on all the reports and everything we see, they didn’t anything wrong in this particular instance, and they didn’t even use the dossier to try to take Trump down. John McCain, in fact, is the one who handed the dossier over to James Comey so, again, kind of goes back to Republicans.

It’s an interesting story to say the least but, as of right now, there’s nothing necessarily too new that we’ve learned from it, and there’s no evidence whatsoever of any kind of illegal activity on behalf of the Clinton campaign. All we know at this point is that both Clinton and Trump were just two people who were absolutely so desperate to be President of the United States that they would turn to any source, any information that they could, in order to win that office. That’s about the only thing we can truly confirm at this point about what both the Clinton campaign did and about what the Trump campaign did with regards to who they met with, who was in that meeting with Don, Jr. and that Russian lawyer and what they really talked about. Two people, who desperately wanted to be President of the United States, no matter what they had to do to win that office.