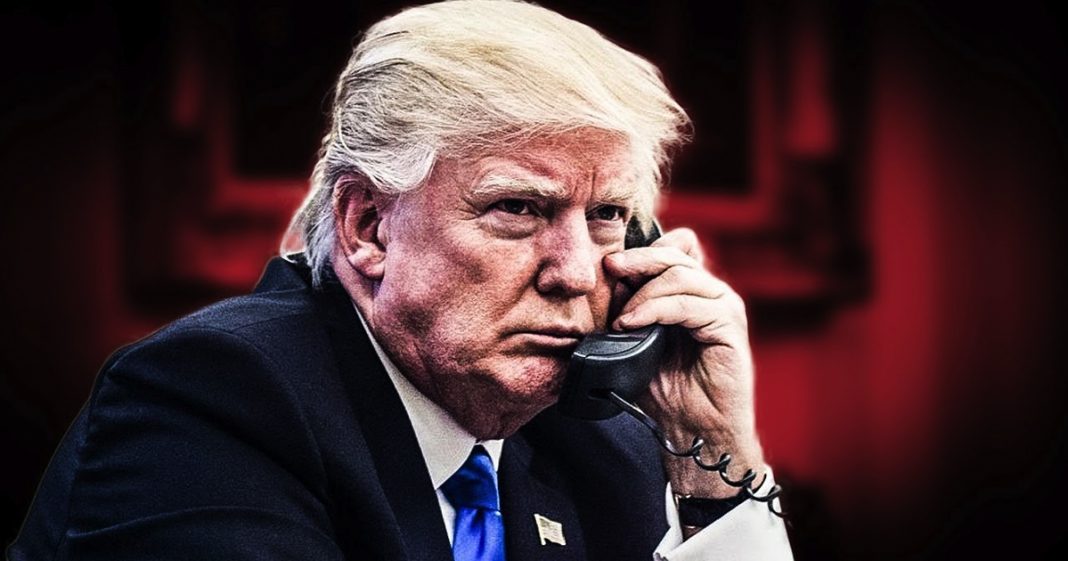 Donald Trump found himself in hot water recently when it was revealed that he wasn’t telling the truth about a phone conversation that he had with a widow whose husband was killed in the Niger attack. And still today he’s lying about the conversation on Twitter. This is not normal – we cannot let the President’s behavior become something that we just accept, as Ring of Fire’s Farron Cousins explains.

For about the last week, Donald Trump has been in a fight with a Gold Star widow over the actual conversation that he may or may not have even had with her after her husband was killed in action. Myeshia Johnson’s husband, La David Johnson, was killed in that ambush attack in Niger. Donald Trump was not there to greet the bodies as they arrived back in the United States, although at the time he said, “Don’t worry. I’ve called everybody.” Well, as it turns out, he hadn’t called everybody, and that’s where this whole, I guess, fiasco began for Donald Trump.

He decides later on in the week he is going to finally make those phone calls, and when he does, he tells Ms. Johnson that you know, your husband knew what he signed up for. According to Johnson, who finally broke her silence on Good Morning America, I believe, she said that the president’s phone call actually hurt her even more than she was already hurting. She didn’t necessarily come out and directly attack the president. Instead, Democratic Representative Frederica Wilson came out and did this, who was present during the phone call, corroborated Johnson’s story here, so right now we have all of the witnesses versus Donald Trump.

Trump is still out there today trying to refute what this widow, this pregnant widow, said about the phone call the president made to her. Here’s what Donald Trump tweeted early Monday morning. “I had a very respectful conversation with the widow of Sergeant La David Johnson, and spoke his name from the beginning without hesitation.” The reason he says that is because Myeshia Johnson says that Trump could not remember her husband’s name during the phone call, and that’s one of the things obviously that hurt her even more, that the president didn’t care enough to learn her husband’s name.

Now, on Twitter though, Donald Trump is out there saying, “I did it. I made the phone call. We had a very great phone call. I said his name from the beginning without hesitation,” almost as if not only that he’s defending his position, but that he’s bragging that he had a big boy conversation, and acted like a decent human being for a few seconds to a pregnant woman whose husband just died. Their kids no longer have a father, and Trump couldn’t even remember his damn name.

Trump probably doesn’t even understand the specifics of what actually happened, because as of right now, the US government has not necessarily come out with full details of this Niger attack. The bottom line is that Trump’s behavior here, his continued attacks, both on Myeshia Johnson and on Representative Frederica Wilson, are absolutely reprehensible, irresponsible, and disgusting. General John Kelly has also jumped into the fray, going after Representative Wilson in this particular situation. Fox News has jumped on board, going after both women.

This woman lost her husband. This woman lost the father of her children, the father of her unborn child. He’ll never be there. He’ll never meet that child, and Donald Trump couldn’t even be bothered to learn the guy’s name, and instead, for at least four or five, maybe even six days, has spent all his time on Twitter going after this woman, trying to pick a fight with a Gold Star widow as if somehow he’s going to come out on top on this. That’s not how it works. He could’ve just as easily come out and said, “You know what? I was wrong. I wasn’t the best in this phone call. I’ll make it up to you. I’m sorry,” end of story. But he didn’t, because Donald Trump will never admit fault. He will never admit that he was wrong, and he will never apologize for the disgusting actions that he has made both as president and as a private citizen here in the United States.