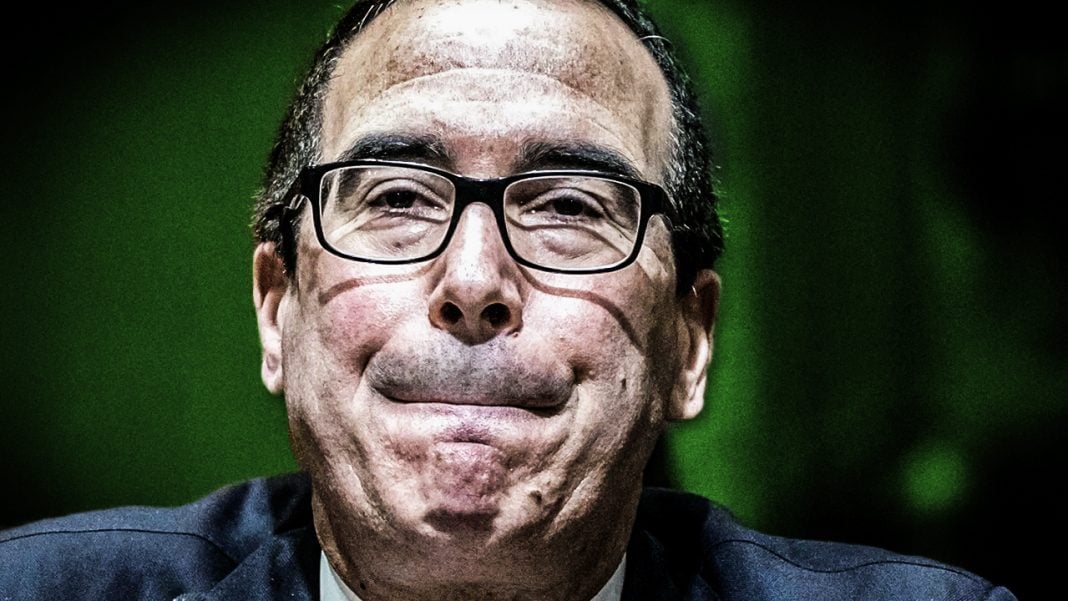 Steve Mnuchin, the Secretary of the Treasury, told Politico earlier this week that it was just too darn hard to not cut taxes for the wealthy in the United States. Mnuchin says that the math just shows you have to cut their taxes. That doesn’t quite make sense, but that’s exactly what Republicans in the US wants us to believe, as Ring of Fire’s Farron Cousins explains.

If you were wondering why every single policy the Republicans have happens to be cutting taxes for the top 1%, Steve Mnuchin, the Treasury Secretary of the United States, gave us the answer earlier this week when he told us, “It’s just really hard to not cut taxes on the wealthy.”

That is what Steve Mnuchin said. It’s just too hard to not cut taxes on the wealthy. Like Republicans can’t help themselves. Like they have some kind of addiction that they don’t have a patch for, so they just instinctively, habitually, have to cut taxes for the wealthy.

Now, Mnuchin did clarify that when you look at the math and look at how much they pay, yeah, it makes sense. Well, no, actually, your reasoning doesn’t make any sense. Do you know you they pay so much? Because we have a graduated income tax here in the United States, and the more you make, the more you pay.

That’s what makes it fair. And for Mnuchin or any other Republican to come out and say it’s just too hard to not cut their taxes, I can’t think of a dumber thing to say than that right now. I can’t imagine how the brain twists itself and does such loops in order to justify something as horrible as this.

This Republican tax plan, that Mnuchin is referring to, is an absolute recipe for recession. That is what will happen if this tax plan gets enacted. How do we know that? Because it’s literally happened every other time they’ve tried this plan. Republicans are incapable of learning.

I don’t know another way to say that. We did it in the 80s. Recession. We did it in the early 2000s. Recession. Massive recession that time. Why? Because we do not do anything to lower taxes on the working class, which their current plan does not. We cut taxes on the wealthy, so we have less money going into other areas. That’s one of the big reasons why our infrastructure’s crumbling before our eyes.

And Steve Mnuchin says, “Gee, it’s just too hard to not do that.” So I guess it’s too hard to not plunge the country into a recession? It’s too hard to not be a complete moron? If you were to say something like that, yeah, I’d totally believe you. Because at this point, the hardest thing for Republicans to do is to not give out massive giveaways to the wealthy elite.