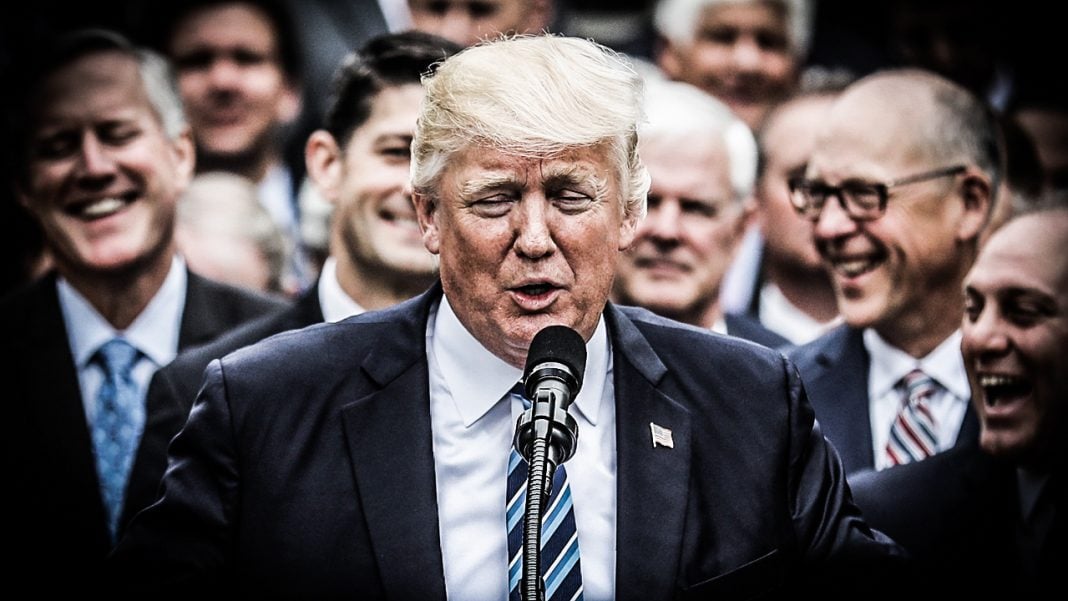 51 Republicans in the US Senate just voted to cut funding from Medicare and Medicaid in order to help fund their proposed tax cuts for the rich. They are taking away healthcare from the needy in order to give more money to the greedy. This is what Republicans do, and we have to stand up and fight back. Ring of Fire’s Farron Cousins discusses this.

Late last week, Senate Republicans passed a budget resolution that would cut Medicaid by $1 trillion and would cut Medicare by $500 billion. For those of you who don’t know, Medicaid is the government program that provides health insurance or healthcare coverage for low income Americans, Medicare is the government program that provides healthcare coverage for senior citizens here in the United States. Both of these programs have now been but through this Senate budget resolution, still has to pass through the House to be official, in order to give tax cuts to the top 1% in this country. That is why this happened. Senate Republicans, 51 of them to be exact, who voted in favor of this budget resolution have voted to take money away from the needy from the needy in order to give that money to the wealthy in the form of tax breaks. That is 100% what happened last week.

Republicans in the Senate thought that it was perfectly fine to essentially strip millions of Americans on both Medicaid and Medicare of their healthcare coverage, say, “You know what? Medication for you’s not that important. Going to the doctor, no big deal. You’ll figure it out.” These rich people who own many, many homes, have dozens of cars, huge homes, they need more money. They need a fifth home. They need a 12th car. They need another vacation home, so let’s give that money to them because they’re the ones who are gonna put it to good use. I know we were using this money to keep you alive, to allow your children to get the medication that they need, to allow senior citizens to get treatment for their diseases and ailments and everything else, but these poor wealthy people in the United States just need that money so much more than you do.

That is the Republican policy, that is the Republican plan, that is what Republicans have been doing ever since they’ve been in power since the 1980s. And in the few years where they haven’t been in power, they’ve done nothing but bitch about the fact that that is what we need to be doing. They have made this very wide-open here. They do not care about government programs that benefit the needy. They wanna slash-and-burn, as we’ve seen through this, as we’ve seen through their other budget resolutions. They wanna take money away from those people who need it, those people who are using that money to literally stay alive, and give it to the top 1% so that these people can have a few extra dollars in their bank account at the end of the year or so that they can buy another house or so that they can buy more stocks.

It’s not gonna trickle down into the economy, it’s not gonna go to workers. The average American family will not get a tax cut through the Republican tax reform plan, and yet all of these are things that Republicans have told us. “We’re all getting a tax cut. The money’s gonna trickle down. We’re all getting a raise,” Sarah Huckabee Sanders was tweeting out that kinda nonsense this morning as well. It’s not gonna happen. What’s gonna happen is that low income Americans, elderly Americans, and Americans of every shape, size, and color and basically economic background up to about $100,000 a year, we’re gonna see these people far worse than they have been probably since the 1980s while the top 1% is gonna continue to get more, continue to milk the Federal Government for all they’re worth.

We’re going to hit another recession if the Republican tax plan comes through. Why? Because it’s literally happened every other time we’ve tried this. So go ahead, if you wanna believe these Republican lies, if you wanna believe it’s all gonna be sunshine and rainbows because the wealthy are getting a tax break, I suggest you go spend time with a family living of Medicaid, an elderly couple supporting themselves through Medicare for their healthcare insurance. Go spend some time with them and see how they feel about these Republican budget cuts and tax cuts and see if they’re optimistic about their future.