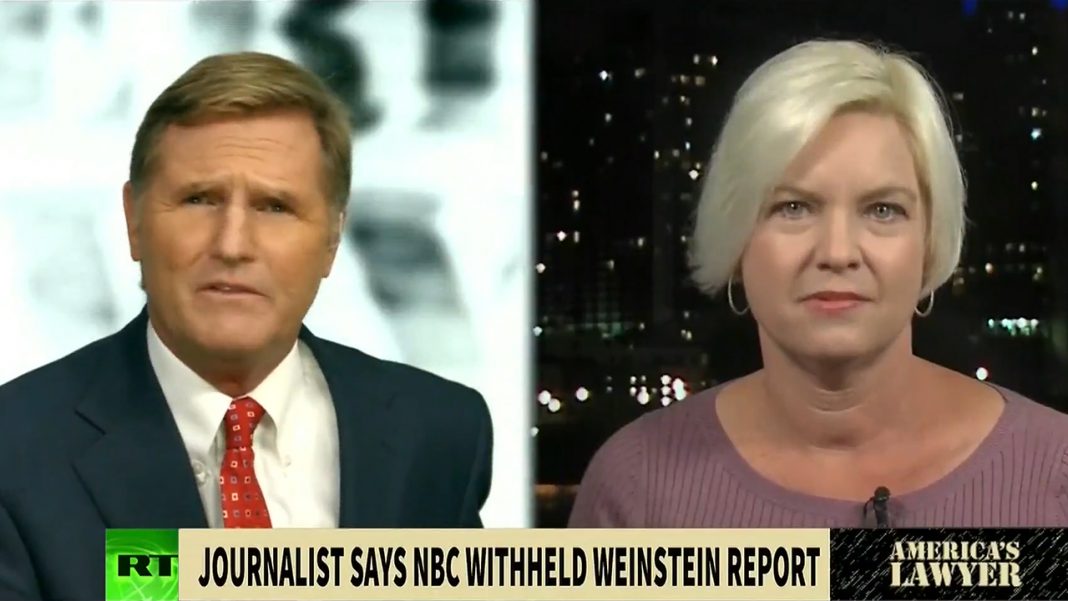 Via America’s Lawyer: Then Mollye Barrows, Legal Journalist for The Trial Lawyer Magazine, talks with Mike about why NBC choose to delay publishing their own accounts of Weinstein which, wasn’t made public until one of their own freelance reporters got the story published by the New Yorker.

Mollye, let’s get right to this. How is NBC possibly arguing a defense of not publishing this story? I mean, I can’t name a reason. We know this, it wasn’t the lawyer that said, “You can’t do this story”, it came from … From what I can see, it came from the advertising department. “Don’t do the story, because Harvey advertises with us an awful lot.” What’s your take?

Mollye Barrows:
Yes. There’s a lot of speculation about that. There are other journalists that are coming forward and saying the same thing. Right now, the spotlight is on NBC news president, Noah Oppenheim. He said, when Ronan [Farrin 00:01:10] brought him that story, that it simply wasn’t ready. That they gave him the go-ahead. They have him the resources. They wanted him to look into this investigative piece, but he said that when Ronan brought it to them earlier this year, that there were gaps in the story, like victims being hesitant to give their names because they were scared of Weinstein. He wanted more people to go on the record with their identities. Farrow says his story, though, was reportable, and that others in the NBC network had agreed that it was. He had these people lined up to go on camera. Some of them that did want their faces covered; employees who’d worked with Harvey.

Going back to your report earlier, with the former reporter, talking about how he would bring women, Weinstein would bring women that worked for him, what he called honey pots, into the room, with actresses or models that he wanted to target sexually, under the guise of having a professional meeting, and then he would ask the honey pots to leave, and then he’d be alone with these women. Allegedly, these harassment and these attacks, really, is what they are, would occur. So all of this was known in the media.

You talk about, really, Phil Griffin, is the person that holds the key to what MSNBC reports. Phil Griffin had to be the person involved in there, too. Let’s not blame it on one person. But I think this is not just an MSNBC problem, this is a media corporate-wide problem.

Another side of this: Sharon Waxman, she wrote a piece, a long piece, about how the New York Times also blocked her story about this whole saga, that she wanted to publish in 2004. What’s that about, Mollye?

Mollye Barrows:
Yeah. So many people are coming the forefront now, to talk about what they knew about Harvey Weinstein, and when, and they’re asking a lot of other questions about who know what, and when. Waxman is a good example. Immediately after the New Yorker did their piece … Of course, that’s ultimately where Farrow had his explosive piece run, where three women who accused Harvey of rape, went on the record to come out. Now, the New York Times piece, obviously, a few days earlier came out, talking about initially broke the story with these allegations. Farrow’s piece talked about rape, and Waxman came out immediately after that and said, “Hey, I worked for the New York Times 10 years ago. I was looking into a story.” The allegation then was that Weinstein had hired a director who had no film experience, because his real job, according to Waxman and tips that she had received, was to procure women for him. To bring them up to his room on pretense of a meeting, or to bring them to some sort of business meeting, where he still took advantage of them in the open business office, behind closed doors.

She said she had the word of one particular woman. They were going and ferreting it out, as you will in the media, but as the story came closer and closer, got together and came closer to print, she got calls from Russel Crowe, she got a call from Matt Damon, vouching for this director. Saying that, basically, Weinstein had asked them to call her and say, “Oh, the director really wasn’t working for Harvey, he’s a good guy.” They claim now they didn’t know that they were supposed to be calling her on pretense of protecting Harvey, that they said that Weinstein just said, “Vouch for this director, he’s a good guy.” But ultimately, that’s the story that she put together, and she said that, beside the calls that she got from those actors, she believes that Weinstein put pressure all the way up the administrative ladder, and that before it was all said and done, her story was gutted and relegated to a back page in the paper.

Initially, her thing [crosstalk 00:04:55] it was such an open secret. Everybody knew. Why wouldn’t you jump on a scoop like that?

Mike Papantonio:
Of course. You were an anchor for how many … I mean, you were a news anchor for what, 20, 25 years.

Mike Papantonio:
Getting a story like that, where you say, “Okay, here’s the person. They’re willing to stand behind the story. Here’s the contract, for god’s sakes, where we gave this thug … we gave him a pass by saying, “We know that he’s going to sexually assault somebody, and when he does, we have what they call liquidated damages built into the contract, where we’re going to pay $250,000, or $500,000.” People don’t even know about this part of the story. They knew this guy’s history so well, that before they would put him around people, they had to say, “We know he’s going to assault somebody, so let’s go ahead and liquidated damages ahead of time, so this won’t be so public.”

But look, let me ask you something. As this case goes forward, where do we start looking. Where, in your opinion, do we start looking about who’s responsible for this type of thing in a news organization? And why don’t we talk about that? Why don’t we talk about, “Do we really have to have corporate America, corporate media, operating in a way that we really can’t even tell our stories, because advertisers just won’t permit us to do it?” Where do we start with a story like that?

Mollye Barrows:
Well, it seems to me, you start with the FCC’s directive. If you’re going to broadcast news, if you’re going to be in the media business, then your first and foremost priority is to give the public the information they need to be informed, and to make good decisions. You can apply that to everything from local politics, all the way up to this Harvey Weinstein issue, because this is an industry-wide problem. This is about sexual harassment. This is about allowing men in power from Roger Ailes with Fox, to Bill O’Reilly with Fox, to behave badly, because they impact bank accounts, and they impact people’s jobs. These men were allowed to lead with fear, to rule with fear, and because they were profitable, their bosses did nothing until it became a stain on them. Until the public found out about it.

If I’m in the newsroom, I’m just going to go back to basics and say, “What’s moral and ethical? What does my editorial board say is a standard for reporting?” I’ve talked to rape victims before. I’ve talked to molest victims before. They don’t always want to give their names. They don’t always want to be on camera. Sometimes it’s easier to talk to a print reporter, than it is to a television reporter, but either way, there are steps you can take to verify and get around it, and still get the story out, and serve the public.

Mike Papantonio:
… that NBC can come through this and say, “Yeah, we’re legitimate.”