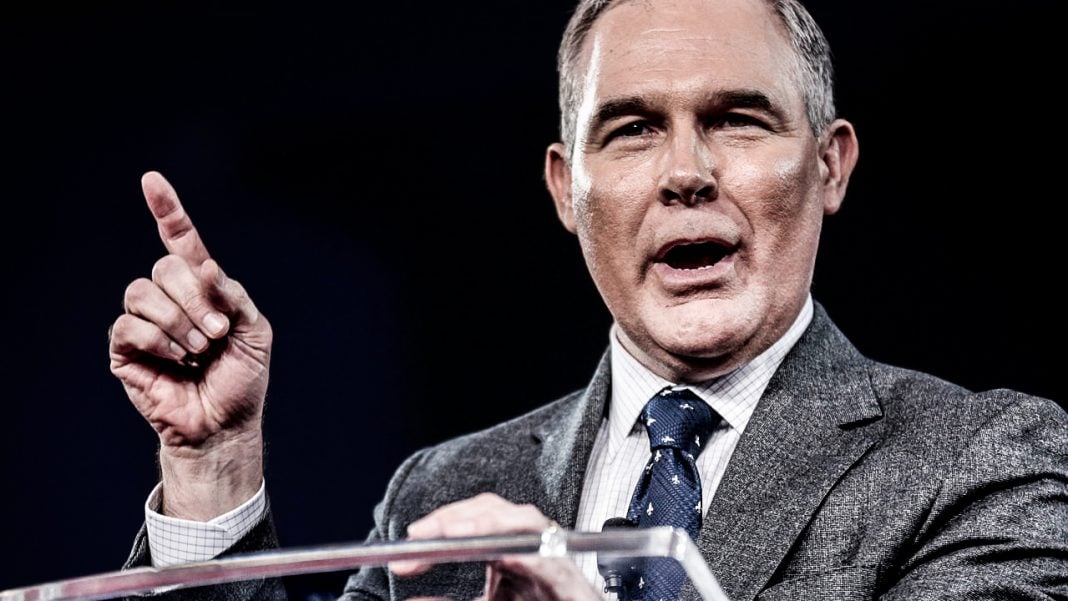 According to a new report, the cost of the anti-environmental platform of the Trump administration could total as much as $34 billion a year just in health costs. That’s how much America will spend on health-related issues from the administration’s decision to repeal President Obama’s clean power rule. Ring of Fire’s Farron Cousins talks about why the health costs are just a small part of what we’ll all be paying as a result of the anti-science agenda of Donald Trump and company.

On October 10th, EPA administrator Scott Pruitt decided that the United States has had enough of clean air, good environmental regulations that help protect the health and safety of our environment and the American public. So Scott Pruitt on October 10th decided he was going to repeal President Obama’s clean power rule that regulated the emissions that could come out of coal-fired power plants.

Now, while making this decision, Pruitt said that the war on coal is over. We’re going to start embracing these dirty fossil fuels that have been fueling the country for a couple hundred years, ignoring the fact that new and cheaper and cleaner alternatives are readily available and growing at an increasingly rapid rate. Instead, Scott Pruitt wants to take us back to the 1800s, 1700s and say we’re still gonna burn coal just like our great-great-great-great-great grandfathers did, because that’s where our thinking is today. That’s how backwards we are.

But here’s something Scott Pruitt didn’t tell the American public when he signed the repeal order for Obama’s clean power plan. It’s gonna cost the United States upwards of $34 billion per year in additional health-related costs as a result of the repeal of this rule from the Obama administration. That’s how much experts are estimating it’s going to cost us due to the coming increase in air pollution that we’re going to see. We’re talking about hundreds of thousands of people across the country suffering from new and worsening respiratory illnesses, 300 thousand, excuse me is the number of days off per year we’re going to see according to the experts, based on the repeal of this law.

$14 billion and $34 billion is the range in which we’re going to see a decline in economic activity as a result of the repeal of this rule. So, even on the low end, at $14 billion extra that we’re all going to have to pay as taxpayers each year for rising health costs, is it worth it? Is it worth it to allow coal companies to not mitigate how much carbon pollution they’re spewing into our atmosphere? Is that worth it?

The additional deaths each year, from people breathing dirty air? The additional cases of asthma developing in children or senior citizens dying from pollution? Is that worth it? $14 billion, maybe even $34 billion on the high end? The answer is absolutely not, and you’d have to be a complete psychopath to think, “You know what, that sounds reasonable. I’m okay with the pollution; that’s a decent enough price.”

No, again folks, we’re still basically powering this country with the same kind of fossil fuels that we used to power this country when it was founded. Of all of the things in this country that have evolved and gotten better and made these technological advances since the country was founded, our energy supply, for some reason, really hasn’t. We’re still burning coal.

Why do we continue to put these climate-change denying, science-denying, reality-denying people into office? It’s not because they’re looking out for us; it’s because they’re looking out for corporations, and those corporations are those the ones that continue to fund their campaigns, at our expense. Because these people who run these companies, they don’t live in the same areas as their factories. They’re not the ones with homes near polluted streams or rivers or polluted airways. They’re in those gated communities, where they don’t have to worry about the pollution they’re spewing out.

Not to mention the fact that most of them are old enough to where they’re not going to be around when we start to see the real devastating effects of climate change, even though we’re seeing a lot of those today with California being on fire and these increasingly frequent and intense hurricanes forming in the Atlantic Ocean. But yeah, let’s go ahead and let corporations like coal plants spew as much carbon into the atmosphere as they want.

Because we’re the ones who are gonna have to pay the price regardless, why put the burden on those poor power companies? Or at least, that’s gotta be the thinking going on inside of Scott Pruitt’s demented little brain if he thinks that it’s a better idea to screw over the American public and let coal companies do whatever the hell they want, as opposed to just leaving one simple rule intact that wasn’t even costing these coal companies that much money. But you know what it was doing? It was helping everybody in this country breathe a little bit easier. But thanks to Scott Pruitt, we won’t have to worry about that anymore.