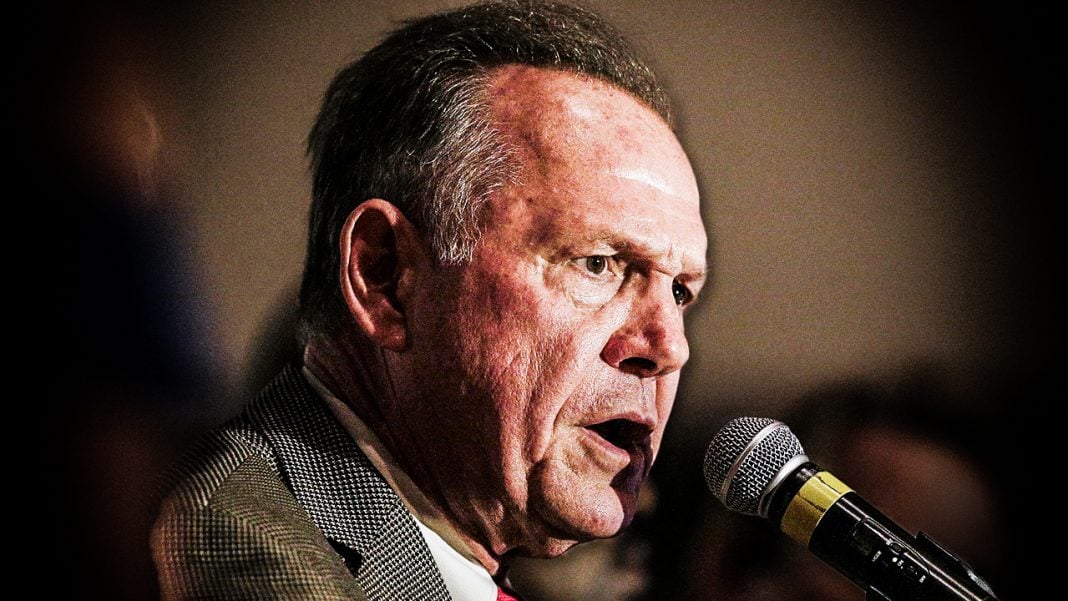 Roy Moore, the former Chief Justice of the Alabama Supreme Court and current candidate for Senator, believes that we should arrest NFL players who kneel during the National Anthem. Moore has demonstrated repeatedly that he doesn’t understand what is in the Constitution, so why would anyone vote for him to protect it? Ring of Fire’s Farron Cousins discusses this.

Roy Moore, the current Senate candidate for the Republican Party from Alabama to replace the Senate seat vacated by current Attorney General Jeff Sessions, who also … Moore happens to be the former Chief Justice of the Alabama Supreme Court. He said in an interview with Time magazine on Wednesday of this week that people, the NFL players who are protesting by kneeling during the national anthem, he said that we need to have them arrested and thereby put in jail for exercising their First Amendment rights. Now, according to Roy Moore, who again, was the Chief Justice of the Alabama Supreme Court, he believes that there is a law against disrespecting the national anthem of the United States.

As it turns out, no, there’s actually not. You have every right to kneel, or sit, or do whatever you want during the national anthem. You cannot mandate patriotism, as Republicans like to say. That’s what fascists do. They demand that, so no, Roy Moore, you’re first and foremost wrong about that. Second of all, you still clearly don’t understand what these people are protesting. They’re not protesting the anthem. It’s not that they just don’t like the lyrics or the music. They’re not protesting the flag. They’re not protesting the military. They are protesting because they believe there is a very serious problem in this country that has to do with the fact that police officers are murdering unarmed black people in this country, and they are. That is what they’re protesting, so get that through your disgusting little head first.

The other thing you need to get through your head, since clearly you have a history of not understanding it, is what exactly the First Amendment to the US Constitution is, what it means, what it contains. For those of you who do not know, Roy Moore [inaudible 00:02:10] some very serious problems, issues, legal troubles years ago because he decided he wanted to have a tablet featuring the 10 Commandments at his courthouse. That’s illegal. That violates the First Amendment, just like most of the things that Roy Moore has decided to do throughout his career also happen to do. You cannot have the 10 Commandments in a federally-owned building, unless of course you want to go ahead and throw in some monuments to Judaism, or Hinduism, or the Muslim faith, and atheists of course, because the United States cannot prop up or support one particular religion. That is what the First Amendment says.

The First Amendment also says you have a right to organize peacefully. You have a right to protest, which is exactly what these NFL players are, so for somebody who served as the Chief Justice of a state Supreme Court, somebody who is currently running for Senator in the state of Alabama, you sure don’t seem to know very much or really anything at all about what is in the Constitution that you are trying to get elected to protect. Seems kind of counterintuitive and makes me question the intelligence of anybody that would come out and actively support such an open moron as yourself. My advice to people in the state of Alabama is that if you actually cared about the Constitution, if you care about the rule of law, do not vote for Roy Moore. I’m not advocating on behalf of the Democrat, although I think he’d do a much better job, Doug Jones, but it takes a special kind of stupid to think that a guy who doesn’t understand what’s in the Constitution should be elected to help protect it.