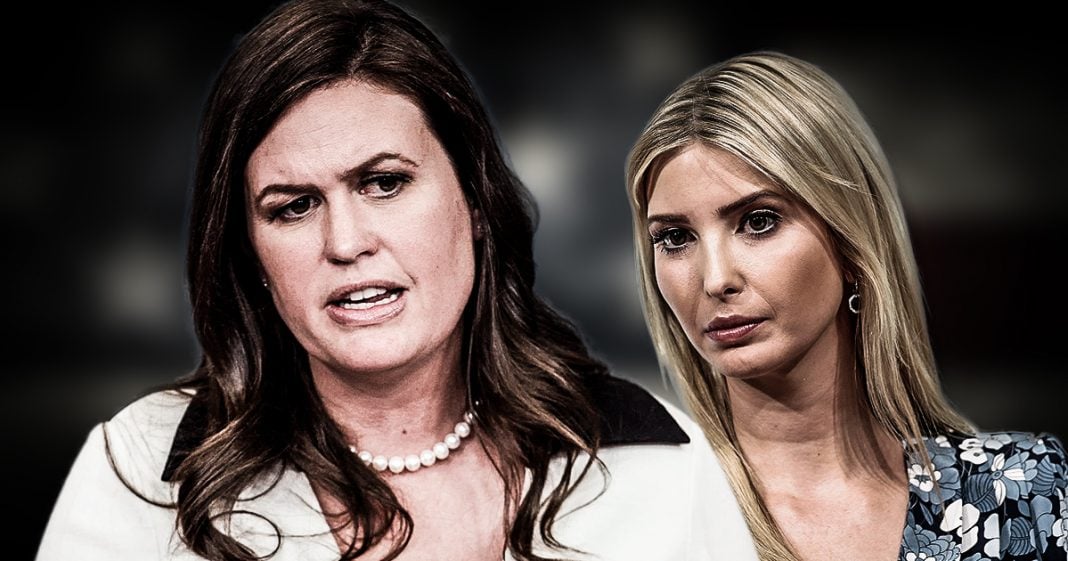 Not long ago, Ivanka Trump sheepishly admitted that she has absolutely no influence over her father. But that statement from Ivanka didn’t stop White House Press Secretary Sarah Huckabee Sanders on Tuesday from telling America that we should be praising Ivanka for influencing her father on women’s issues. Ring of Fire’s Farron Cousins explains why this will go down as one of Huckabee Sanders’ most ludicrous remarks.

During a recent interview with Conservative talk show host Hugh Hewitt, White House Press Secretary Sarah Huckabee Sanders is furious, according to what she said in this interview … She’s absolutely furious at the press because they’re not heaping tons of praise on Ivanka Trump for what she has been able to do as far as influencing her father, specifically on women’s issues.

Now, here’s what’s interesting about this whole statement by Sarah Huckabee Sanders is that around a month ago, maybe not even that long ago, Ivanka Trump admitted that people need to scale back their expectations of her, and that she’s really not able to change her father’s mind on any issues. Just a few days ago, a story came out, poster on Raw Story, where members of the administration, people who work inside the White House, are confused as hell as to why Ivanka Trump is even there. And they have no idea what she actually does. They just know that she’s there, she’s just not doing anything.

So, for Huckabee Sanders to come out and say that anyone should be heaping praise on someone for something they’ve already admitted they’re not even able to do, that is probably the height of “doesn’t make any damn sense.”

Now, Huckabee Sanders is obviously no stranger to saying things that absolutely do not make any sense, but I think this particular statement is incredibly annoying and obnoxious just due to the fact that she wants us to praise a woman who’s essentially using sweatshop labor to create her clothing line, as reports have shown us. Workers in the factory that are making clothing and shoes and handbags for Ivanka Trump’s brand are being paid about half of what other workers in that area make. They’re not getting the time off that they need. They’re working unpaid hours. They’re working about between 60 and 80 hours a week.

So, yeah, I don’t think this woman has done anything that deserves any kind of praise. On women’s issues, where the hell has she been? I mean, her father … I know Republicans love to talk about what a philanderer Bill Clinton was. Yeah. Take a look at Donald Trump. Bill Clinton’s not on tape saying the same kinds of horrible things that Donald Trump is. Bill Clinton has not had as many women accuse him of sexual assault or sexual harassment as Donald Trump has. So that argument kind of falls flat.

So, I do not believe for a second that Ivanka Trump deserves any kind of praise whatsoever. Not just for influencing her father on issues, but basically as a human being in general. She’s pretty much as bad as it gets. She has enabled her father at every possible opportunity. She could’ve stepped up. She could’ve done something. She could’ve been decent, but instead, she rolled over on the issue of LGBTQ rights, on women’s rights, on climate change, and she let her father push forward with some of the worst policies for each one of those respective groups that we have seen quite possibly in my lifetime. They are trying to roll back eight years of progress, and Ivanka Trump is right there with them.

She may publicly say that she disagrees with it or that she doesn’t like it, but she’s not doing a damn thing to fix any of those problems. She does not deserve any praise, as Sarah Huckabee Sanders says. She deserves criticism and [inaudible 00:03:39] here because she is just as bad, just as horrible as both a business leader and a human being as every other member of that Trump family.