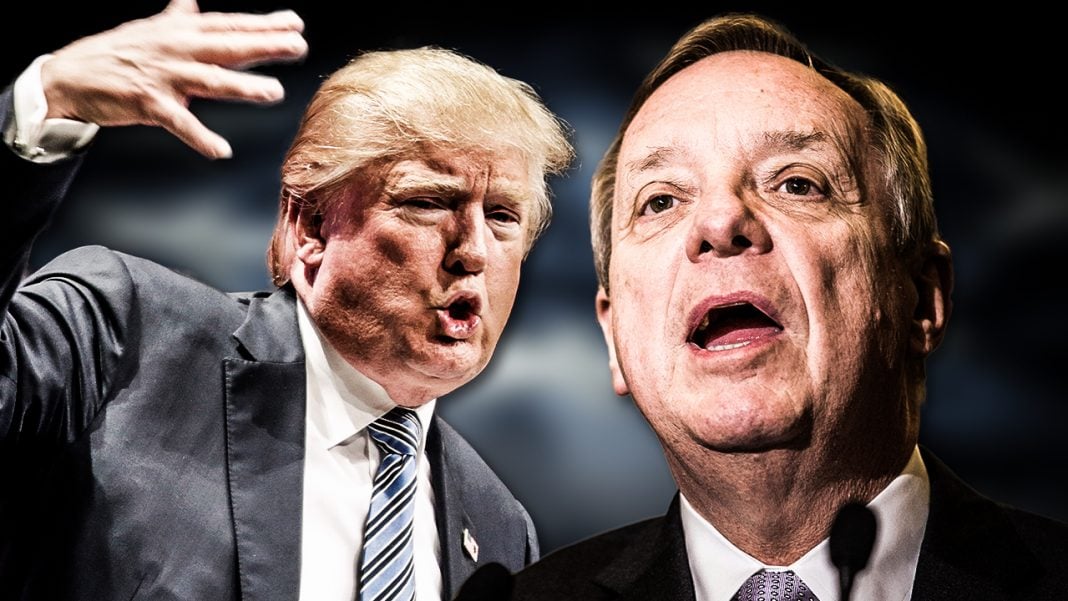 Democratic Senator Dick Durbin warned Democrats that they shouldn’t push the Democratic Party too far to the left or else they’ll lose to Donald Trump again in 2020. Has Dick Durbin been hibernating since mid-2016? That’s the only explanation that would make sense if he honestly thinks the Party should move more to the center. Ring of Fire’s Farron Cousins explains.

Democratic Senator Dick Durbin who happens to be the second highest ranking Democrat in the United States Senate has apparently either been in a coma for the last 12 months, or he has been hibernating or not paying attention to his job or anything within the news media for the last 12 months. Those are the only possible explanations as to why Durbin would go on a Chicago radio station this past weekend and say that the Democratic party needs to avoid moving too far to the left or else, according to Durbin, Donald Trump is going to win again in 2020. Again, you’d have to pretty much have buried your head in the dirt for 12 straight months breathing through a straw, making sure you don’t hear anything going on in the world around you to think that the Democrat should stay or even move closer to the center instead of moving left.

Now we have seen a lot of Democrats come out and say some really stupid, horrific things since Hillary Clinton lost the electoral vote last November. I think Durbin statement here almost a full year later shows that these guys clearly don’t understand what happened in the election and what’s happened in the 12 months since the election. Here is exactly what Durbin said here, “We have to really appeal to that sensible center. It’s a thin stripe now. It used to be a lot wider stripe, but it’s an important and determining factor in most elections.” That’s center, that center that gave Hillary Clinton an electoral college victory. Oh no, that would be the center that gave Donald Trump an electoral college victory that put him in office. I know, I know, Hillary Clinton won the popular vote. I get it. I got it, fine. The US Constitution only calls for the electoral college vote though so your popular vote talking point is pretty stupid at this point.

These are not centrist issues. These are actually far left issues that the Democratic party used to champion, ideas that the Democratic party had thrown out there in the past but then decided, “You know what? That’s a little too far left for us. Let’s move back to the center. I hear there are some corporate donations over there we can snap jab,” because at the end of the day that’s what this is about. This idea by Durbin clearly cannot be about winning votes, because they’ve proven time and time again that centrist Democrats lose elections. So what’s in it for them? Campaign donations and that’s it.

2010, 2012, 2014 and 2016, Democrats ran away from the left. They ran towards the center and they got beaten every single time they did it. Durbin thinks that they should try it again just for the fun of it, right? Maybe, maybe the fifth times the charm. I got to tell you something. At this point, these Democrats who were saying, “We need to move a little more to the center and further away from the left,” they’re starting to sound a lot like those Republicans who keep promising us that, “You know what? The fourth or fifth time we try trickle down economics, that’s going to be the time that it actually spurs economic growth.” It won’t, because that’s not how it works. Just like Democrats moving closer to the center will not win them elections, because all it’s going to do is piss off those true Democrats, the true progressives that are still members of that party.

It’s not going to attract Republicans. It’s not going to attract the outright misogynist, the racist, the hate-filled Republican base and yet somehow people like Durbin think that it will. They think that they can get those people on their side to change their minds and create a better future for all of us. That’s not ever going to happen. So how about you embrace the policies that the majority of this country actually wants to see put in place instead of chasing those corporate campaign donations that have sunk the party for the last four straight elections.