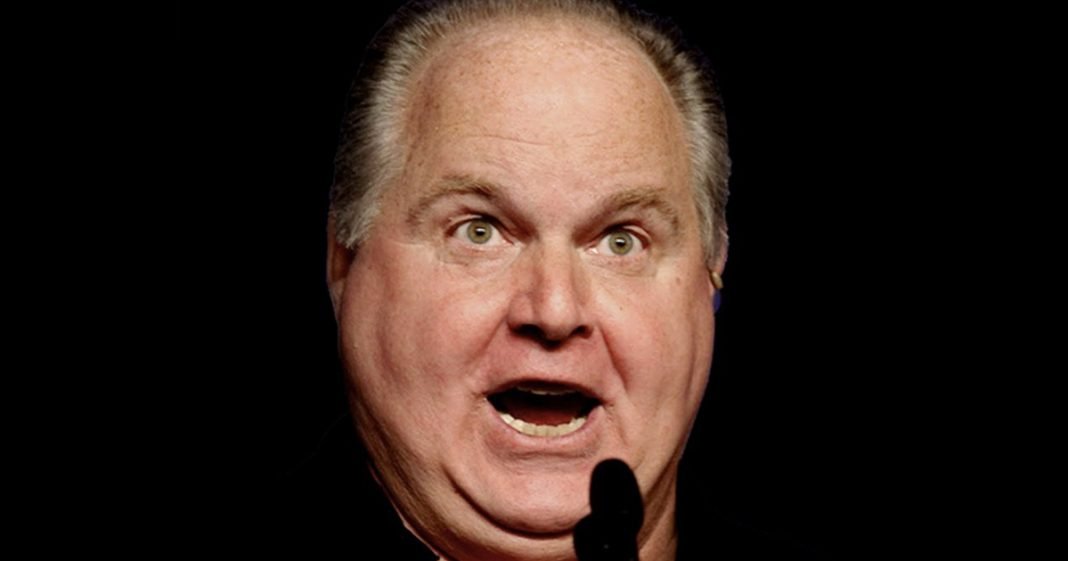 Rush Limbaugh, the king of conservative talking heads, has finally come forward and admitted that Donald Trump’s behavior is beginning to make him nervous. Limbaugh fears that Trump, even with good intentions, good be abusing the power of his office and moving into full dictator mode. Once you lose Limbaugh, you lose the Republican Party, as Ring of Fire’s Farron Cousins explains.

Donald Trump may have finally, at least to some small extent, have lost the support of conservative talk radio king, Rush Limbaugh. Recently, this week on Limbaugh’s program, he said that, “What Donald Trump is doing right now is making me nervous.” Limbaugh was referring to Donald Trump saying that the NFL should require people to stand for the National Anthem during football games.

While Rush Limbaugh agrees that everyone should stand during the National Anthem, he agrees that Trump’s heart is in the right place on this issue and he’s doing it for the right reasons, he is worried about the fact that Donald Trumps thinks that he can order people what to do in this country. He’s worried about the fact that he’s telling private businesses how to handle their employees, which is a gross overstepping of the job of the President of the United States. To his credit, Rush Limbaugh actually seems to understand that. He understands that Donald Trump is beginning to act like a dictator. He understands that that, no matter which part it is, is dangerous for this country.

Now keep in mind, Limbaugh is a Republican. He supports Republican politicians, he supports Republican policies, he supports all of the horrible things that have made this country even worse than it had been. He doesn’t support a woman’s right to choose. He doesn’t support equal rights for the LGBTQ community. He is perfectly fine with police officers mowing down unarmed innocent black people in the streets. The fact that he is slightly at least willing to come out and say, “What Trump is doing is making me nervous,” is a positive step forward.

Now, that’s not going to absolve Limbaugh of any of his past sins, of all of the horrible politicians that he’s pushed, of all of the crazy anti-Democratic conspiracy theories that he’s pushed, but it does show that Donald Trump is losing support from one of the key demographics of the Republican party, and that is the conservative talk show circuit. We know that Donald Trump does not have the support anymore of people like Anne Coulter. I’m pretty sure Glenn Beck is also on the anti-Trump train. Alex Jones, who is a close friend of Donald Trump has even expressed concern that maybe Donald Trump is being poisoned and that’s why his mental capacity seems to be floundering. It’s a crazy theory, but at least he understands that yeah, something’s wrong with Donald Trump. Now Limbaugh is right there with them.

Don’t get too excited though, folks. If something were to happen to Donald Trump, if he gets removed from office and Mike Pence comes in there, all of these conservatives are going to go right back to being Republican cheerleaders, pushing horrible policies that prevent immigrants from coming into this country, that strip women of their rights, that strip police officers of any kind of liability when they kill these unarmed black people, and it’s going to be devastating for the LGBTQ community. Limbaugh is no hero here. It is, however, slightly refreshing to see that he understands that this country under Donald Trump is absolutely headed for a full blown dictatorship if this man is not stopped.