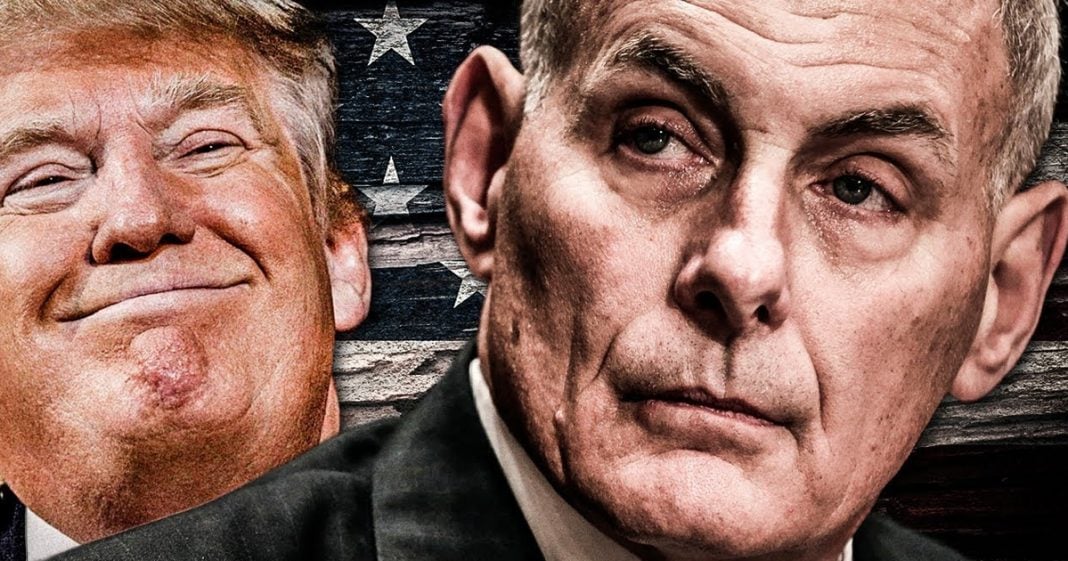 Donald Trump’s chief of staff John Kelly was brought into the administration to tighten up the ship and to reign in Trump. Neither of those things have happened, though not for a lack of trying on Kelly’s part. Now reports tell us that Kelly and Trump are fighting constantly, a sign that things are not good in Trumpland. Ring of Fire’s Farron Cousins explains.

According to a new report in Vanity Fair, Donald Trump’s Chief of Staff, John Kelly, is reportedly fighting with Donald Trump a lot, according to the article. Now, Donald Trump fights with everybody in the White House. Recept reports say that he’s not getting along with anyone, nobody likes him, nobody wants to talk to him, nobody wants to deal with his toddler-like antics. But John Kelly, General John Kelly, the fact that these two are fighting a lot tells you a lot about what’s actually happening in the White House.

See, John Kelly came on board in July when Reince Priebus was removed as Chief of Staff. Kelly came in as the guy, the stern military guy, who was going to reign in Donald Trump. He was going to stop all the nonsense, he was going to stop the incessant tweeting, he was going to get Donald Trump to actually act or pretend that he was president of the United States. And for a while, in a few different situations, we’ve kind of seen it happen. Every now and then Donald Trump lets a little nugget slip where he gets on Twitter and says something that’s not entirely offensive, or racist, or horrible, or demeaning. Every once in a while. And you can bet that those tweets are basically coming from John Kelly. However, those are too few and far between, and to be honest, they’re starting to taper off a hell of a lot.

John Kelly’s influence that he was allegedly supposed to have over Donald Trump never materialized. Why? It’s not because General Kelly’s a failure. It’s because Donald Trump will not take direction from anyone in this country on any issue, ever, whatsoever. That’s the kind of person he is. That’s part of the narcissistic personality disorder. They will not listen to people who are smarter than them because they do not believe that anyone could be smarter than them. Probably another reason why Donald Trump decided to challenge Rex Tillerson to an IQ test.

General Kelly, to his credit, has tried very hard to reign in Donald Trump, but I guess the best analogy here is, yes, it’s like herding cats, except you have one person who is essentially a bag of cats. Donald Trump cannot be controlled, he cannot be reigned in, and more importantly, he cannot be reasoned with. He believe that everything he does is correct, everything he does is the right thing to do. Everyone who tells him otherwise is a moron, or they’re trying to personally attack him, or they just flat out don’t like him and they’re trying to sabotage him. That’s what’s going on in Donald Trump’s deluded little brain, and no matter how good General Kelly is at his job, he’s not going to be able to fight back against that. You can’t tame a beast that doesn’t want to be tamed, especially if there’s something mentally wrong with the beast, and that seems to be the case here with Donald Trump.

So, Kelly and Trump can continue to fight all they want, Kelly can try to reign in Donald Trump and make him act like a president every now and then, but at the end of the day, Trump’s going to do what Trump wants to do, and that’s going to always prove to be a disaster for this country.