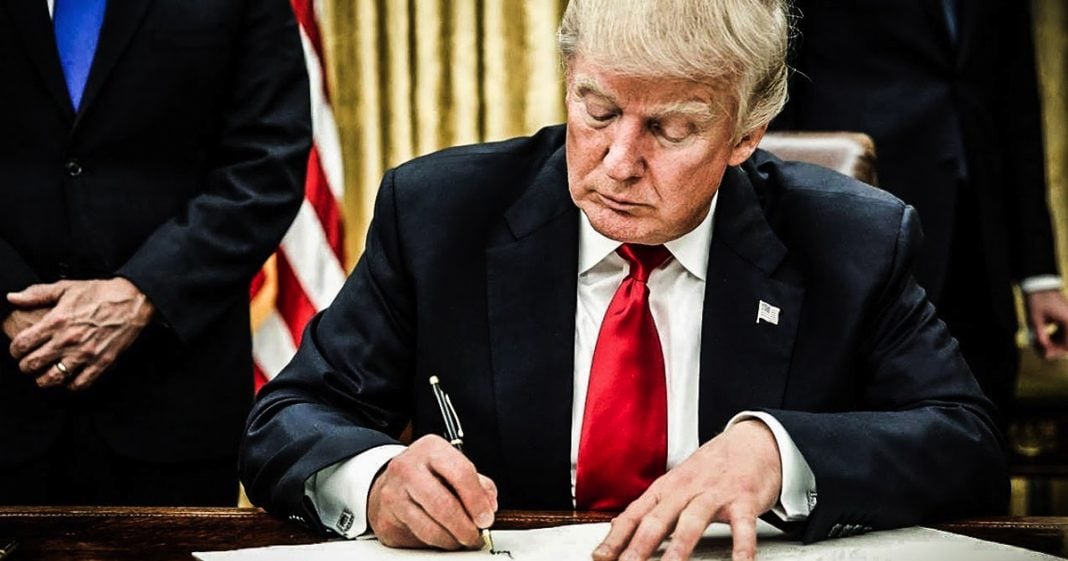 Donald Trump has signed an executive order that will prohibit the federal government from making payments to health insurance companies as part of the Obamacare subsidy program. This means that premium rates for millions of Americans will climb by nearly 25% in the next 18 months, forcing countless Americans off of their insurance plans. Ring of Fire’s Farron Cousins discusses this.

In what might be one of the most heartless actions we have ever seen from President Donald Trump, he’s issued an executive order that will effectively end billions of dollars’ worth of subsidy payments that went to insurance companies to help ensure that low-income Americans, the elderly, were able to purchase health insurance plans through the Obamacare Affordable Care Act program.

What this means, according to analysts and according to the CBO, is that with these payments stopped, with these subsidies ended, millions of Americans are going to see their premiums increase over the next 18 months by at least 20 percent, possibly as high as 25 percent, just in the first 18 months.

What Donald Trump has done here by ending these subsidies, is telling low-income Americans that you’re on your own, we are not going to fulfill the promises that we made in this piece of legislation, we’re not going to enforce the laws as they are written, we do not care about the oath of office that we took to honor and uphold the Constitution and the laws of the United States.

At the heart of it, that’s what this is. The Affordable Care Act is a law. Those subsidies are required under law but instead, he’s directed, through executive order, Health and Human Services to end these subsidies, effectively pricing millions of Americans out of the health insurance market.

This is going to cause a downward spiral, essentially the death spiral that Republicans have been talking about for months, that hadn’t previously existed. Now they’re creating the opportunity for that death spiral to actually begin. They’re doing this purely out of spite. They claim that we just don’t have the money to keep making these “illegal payments” to health insurance companies when, in reality, we have the money. The money is there.

Hell, we just approved a $700 billion dollar-plus budget for the military for one year. You can’t tell me that we can’t afford to give these people these subsidies, not paying for the whole thing, we’re just helping them pay for part of it. You can’t tell me that we can’t afford to allow these people to continue on with their health insurance the way it is. That is an absolute lie from this Administration and, again, they’re doing this on purpose. They’re doing this out of spite, not just for low-income Americans, not just for the elderly, but for Obama and the Democratic Party, who passed this piece of legislation.

They have wanted it to fail since Day 1 and, since it wasn’t failing on [their 00:02:47] own, they decided they had to go in, the Republicans, Donald Trump, and sabotage it from the inside. That’s what this is. This isn’t about costs, this isn’t about creating something better, this is about sabotaging a program that was seemingly working fine. It wasn’t perfect, but it was doing okay. Millions more people got health insurance as a result of this law, and they’re sabotaging it because they want to make Obama look bad and they want to make the Democratic Party look bad.

At the end of the day, this should, I’m hoping, backfire on both Donald Trump and the Republican Party. When we go to the polls in 2018 and you’re already paying an extra 20, 25 percent in your health insurance premiums, I hope everybody in this country remembers which political party did that to them.