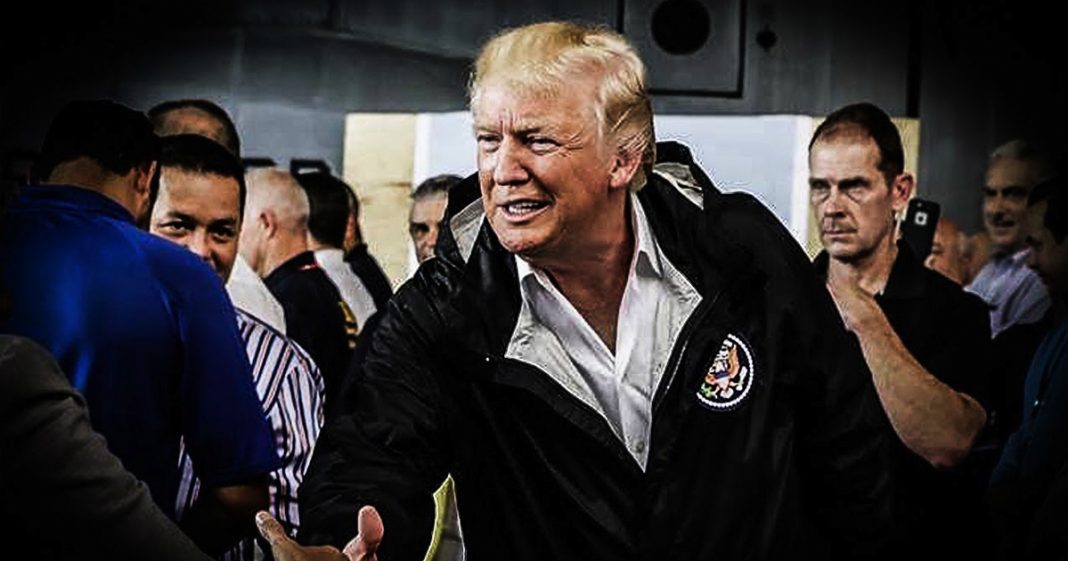 According to a medical professional that was aiding in the relief efforts in Puerto Rico, federal disaster relief employees made Puerto Ricans come in and give them a “spa day” while they were supposed to be working on putting the country back together and saving the lives of American citizens. This was done at the expense of taxpayers. Ring of Fire’s Farron Cousins talks about the disgusting behavior that we’ve seen from all levels of employees within the Trump government.

If you thought that the US government’s treatment of Puerto Rico and citizens of Puerto Rico who happen to be Americans citizens, if you thought that their treatment of them in the wake of these two devastating hurricanes couldn’t get any worse, then you’re about to be shocked. According to a doctor who was present during some of the relief efforts with the federal government, federal government employees brought in Puerto Ricans in the middle of all this disaster, in the middle of the relief efforts, and made these Puerto Ricans give them manicures and pedicures and treat them to a spa day down in Puerto Rico while these federal employees were supposed to be helping save lives, deliver supplies, and help the country rebuild.

Instead, they treated them like some kind of third world citizen and made them come in, paint their nails, paint the toes, give them massages and all kinds of disgusting activities. Let’s keep in mind, these people in Puerto Rico, American citizens, most of them do not have clean water to drink. In fact, just a few days ago the EPA had to come out and issue a warning telling them to stop going and collecting water from superfund sites. If you don’t know what a superfund site is, it’s a site that is so polluted with toxic waste and other chemicals that can prove to be deadly to humans, that people are not allowed to go in it. But because they’re so desperate for water, they’re carrying buckets down to these superfund sites, this toxic waste laden water, filling them up so they have something to give to their family so they don’t die of dehydration.

And these federal workers, members of Trump’s government, forced these people to come in and treat them to a spa day at the expense of US tax payers, because this whole trip down there, we’re paying for it. And I am perfectly fine with having my tax dollars go to rebuild Puerto Rico. They deserve it. They’ve earned it. I don’t care what Donald Trump says about the state of their infrastructure before the storms or that they need to pull themselves up on their own two feet as Paul Ryan says. That’s not how it works. That’s a US territory. We have every much of an obligation to them as we do to Houston, or as we do to Key West, or Tampa, or California that’s on fire right now. Are you going to go to California and make them give you pedicures and massages too? Are you going to go down to Houston and make them do your hair for you?

This is disgusting behavior from this administration, and again, it all flows from the top. Donald Trump and members of this cabinet may not have been present when this little spa day took place, but when these lower level workers see the incompetence and the corruption that takes place at the highest levels of government, that gives them the green light in their minds to do the same thing.

These are human beings down there, American citizens, and we are treating them as we would some kind of undiscovered tribe that we don’t think deserves clean water, or electricity, or housing. Instead, the government wants to treat them like some kind of slaves, and instead of helping them, we’re making them paint toe nails and finger nails, give us massages, treat us to a nice relaxing spa day, because after all I mean don’t you get kind of tired after throwing paper towels out into a crowd?

This is absolutely appalling and we have seen some truly disgusting and devastating footage and stories emerge from Puerto Rico on the wake of these storms, but so far I honestly do not think we have seen anything quite as disgusting as the story of the federal workers having to pull in Puerto Ricans to treat them to a spa day.