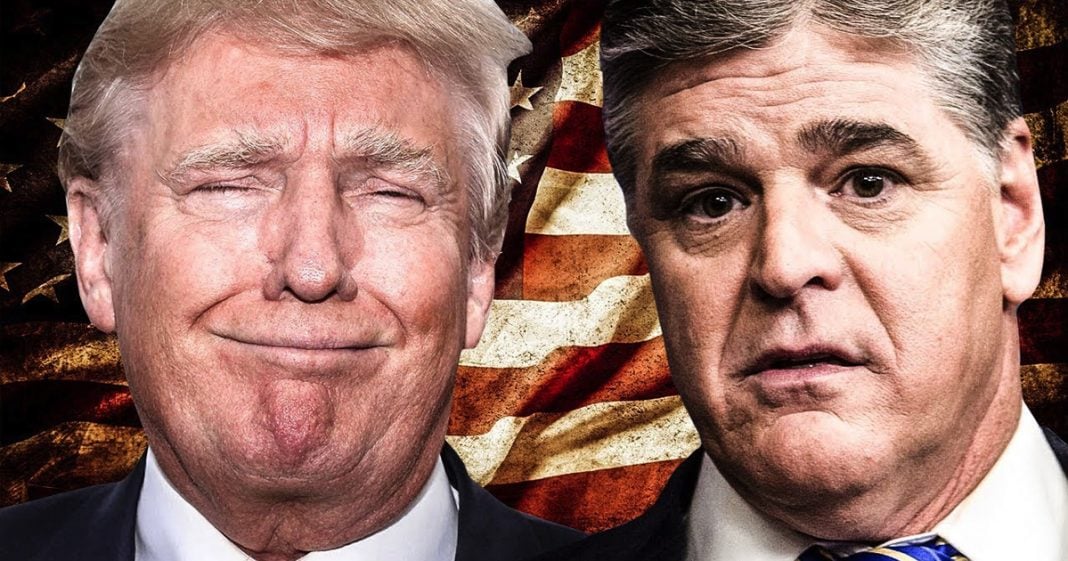 According to a new report in the Los Angeles Times, Donald Trump has been making frequent phone calls to Fox News’ Sean Hannity to get advice about the presidency, and to obviously praise him for his consistently positive coverage of the President. This helps explain why Trump thinks the rest of the media is “fake news,” but it presents all sorts of problems for the people who actually tune in to Hannity without realizing that they are getting state-sponsored propaganda. Ring of Fire’s Farron Cousins explains.

One of the specific examples that we know of, is that Sean Hannity has told Donald Trump personally that, “You’ve got to get harder against immigration. We’ve got to get the wall, we’ve got to stop people from coming into this country.” Obviously immigration has been one of Donald Trump’s pet issues since day one of his campaign, but the fact that he has a Fox News host, a TV personality who has no experience with policy, no experience with anything having to do with an elected official, a guy who goes out there and lies his ass off every single day, the fact that he has the ear of the President of the United States, that should terrify everyone in this country.

Furthermore, the converse of that, the fact that Donald Trump is sitting there having private conversations on his private cell phone out of the hearing of General Kelly, should terrify everyone, because that kind of proves at least one show on Fox News, could clearly be classified as state approved propaganda. That is what Sean Hannity is, that is what is Wednesday night interview with Donald Trump was. Sean Hannity didn’t bother to ask him any tough questions about any real issues that actually matter to anyone in this country, he lobbed soft balls at him, allowed him to use that program as a platform to spread his hate, to spread his propaganda, because those are the only things that Fox knows how to do, and they’re very good at it. They have done a phenomenal job of spreading propaganda and hatred all throughout this country, and that’s one of the reasons Trump himself was elected president.

But we should be concerned about this. There was no evidence that I know of, that I’ve ever seen, and I’ve searched, that Barack Obama was calling up reporters on a near daily basis saying, “Hey, thank you for being so nice to me.” We don’t even know that George W. Bush did that, or Bill Clinton. Donald Trump is desperate for people to love him and approve of everything he does, and as it turns out, the only way he can do that, is by sweet talking jerks like Sean Hannity.