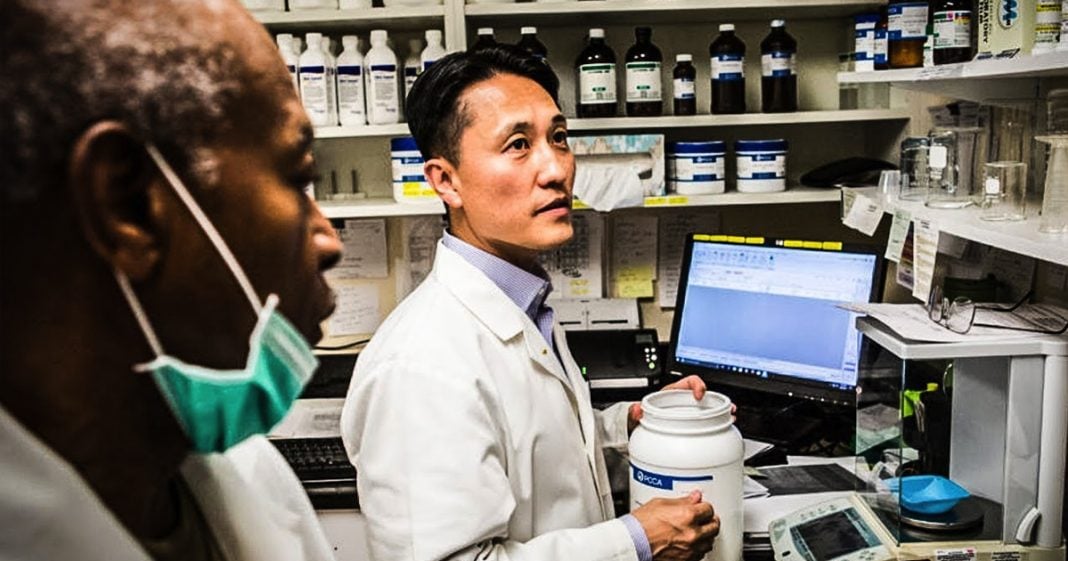 Recently, a pharmacist interviewed by STAT News claimed that he has been filling prescriptions for Alzheimer’s medications for elected officials in Washington, D.C. While the pharmacist would not say who was getting these prescriptions (because that’s against the law) he did say that he can’t be certain the prescriptions are for the elected official. Nonetheless, this information raises serious questions about the overall health of Congress, as Ring of Fire’s Farron Cousins explains.

According to a new report at STAT News, a pharmacist in Washington, DC, who happens to fill prescriptions for elected officials in DC, claims that he has been filling Alzheimer medication prescriptions for some members of congress. Now obviously, due to privacy laws, he’s not allowed to say which member of congress it is. He can’t tell us what state they’re from. He can’t even tell us if it’s a man or a woman. And more importantly, he can’t say for sure, obviously, if the prescription is for the congressman or congresswoman themselves, or if it’s for a member of their family. It’s obviously not uncommon for somebody to fill a prescription for a loved one and go pick it up. Could be in their name. We don’t know for sure because of privacy laws.

But what this story does, is it opens up a very much needed dialogue here in the United States. Right now, the current congress is the oldest congress, by average age, that we have ever had in this country, ever. As we age, as scientific studies have shown, our mental capacities decline. Our physical capacities decline. We are no longer able, as human beings, to do the same things at age 70 that we were at age 60 or 50. There is a very steep decline and diseases like Alzheimer’s are not that uncommon in the United States. So if a member of congress is suffering from this debilitating, degenerative disease, that is something that the public needs to be aware of.

And I don’t mean this to attack anyone that may have Alzheimer’s, especially not in DC, but if you are not able to access your full mental faculties and fulfill the job of which you were elected to do, we have to know about that. But more importantly, you have to step up and say, “That I am not able to do this job anymore because of this illness.” It’s no fault of your own. This isn’t something that people should be attacked over, but it is something that we have to take very seriously.

Because if we have people who make decisions about budgets, make decisions about wars, and they’re not able to fully appreciate because their faculties have declined, the decisions that they’re making, those are things that we have to be aware of, and those are people who are, unfortunately, unfit to serve in congress, or in the senate, or even as President of the united States. This isn’t meant to attack anybody that suffers from any kind of disease, but we should have some standards in place in DC to make sure that we do have the best and brightest, and that if they cannot stay that way through no fault of their own or whatever, they take the first step and step down.

Worry about your health. Worry about your life. Don’t sit there in DC because you don’t want to give up your seat to an opposing party, possibly just because you’re too stubborn to admit that you have a problem, that you’ve got a degenerative brain disease that’s preventing you from functioning properly. And again, at this point, this is speculation because we don’t know for sure who it is that has the prescriptions. We don’t even know if that prescription is being used specifically for Alzheimer’s.

We know that doctors will prescribe medications off-label for many reasons, and that could be the case here, but we do need to understand the mental health of our elected officials in Washington, DC. We require people to go through all kinds of stringent testing, to drive a car, to hold certain jobs in the United States, and I would think that serving as an elected official who can make decisions about life and death, we should require the most stringent standards possible for the people that we send to Washington, DC.