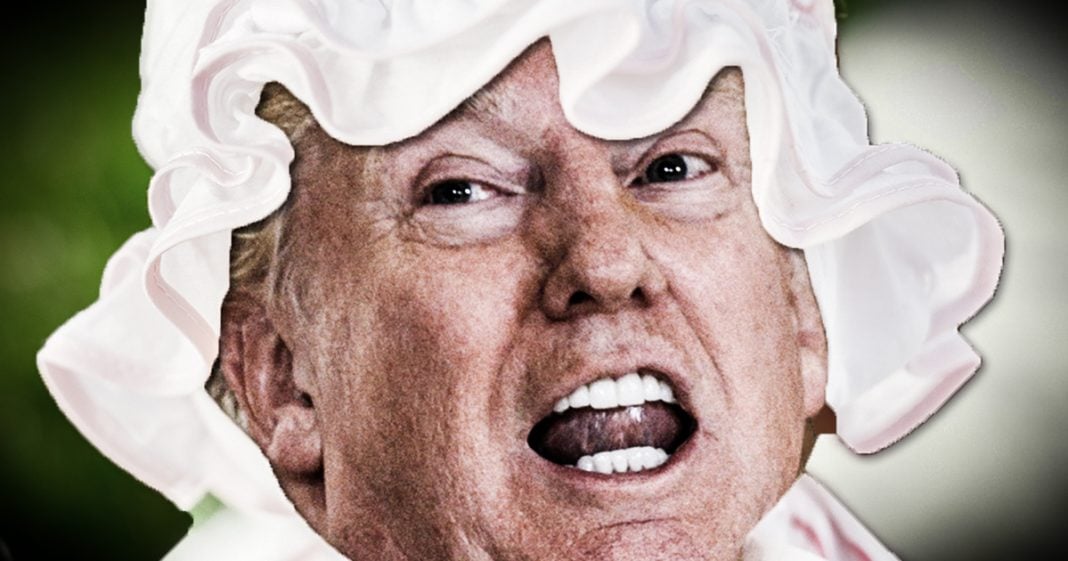 According to a new report, aides to Donald Trump admit that they have to treat Donald Trump like a child in order to placate him. For example, they’ve admitted to using distraction techniques to appease him when they have no intention of actually doing what the man says. These are the kinds of reports that should spark some sort of action from leaders in Washington to remove Trump from office, as Ring of Fire’s Farron Cousins explains.

According to a recent report in Politico, White House aids admit that they have to treat Donald Trump like a child inside the White House in order to keep him calm, to placate him, and essentially distract him. According to the article, what White House aids are doing is that any time Donald Trump has some kind of outlandish request that they don’t necessarily want to address or want to follow through on, they will placate him by never saying no. They won’t say, “No, we’re not gonna do that.” Instead, the technique laid out by these White House aids is they say, “Yeah, sure, okay. We will get to that. Now, let’s talk about this. Let’s go over here. Look at the shiny, jingly car keys, Mr. Trump, because we’re gonna distract you so that you forget you even asked us the initial request.” That is what aids inside of the White House are doing with the president of the United States, because he can’t be trusted to make his own decisions.

This is a big deal. This is more than just another insult Donald Trump kind of story published by Politico or anyone else who’s reporting on it. This shows that those aids inside the White House, even though previous reports have told us they absolutely hate their jobs and they’re terrified of Trump, they might be the only people out there preventing us from getting into World War III, from dropping a nuclear weapon on North Korea, or from an enacting some of the more horrible domestic policies that Donald Trump wants to do. If they are being honest here, which we have no reason to necessarily doubt that they are, they might be the ones preventing Donald Trump from issuing some kind of executive order repealing the Affordable Care Act or some kind of executive order repealing every environmental regulation that Barack Obama put in place.

They might be actually helping our democracy by not allowing Donald Trump to continue making the horrible decisions that we know he wants to make. We know he wants to drop a nuclear weapon on somebody. We know he wants to attack North Korea. We know he wants to build a wall, but as long as those aids are in there jingling those keys to distract him from the real issues, maybe, maybe we can hold off some kind of catastrophic event triggered by the White House just long enough for either the 25th amendment to remove Donald Trump from office or from Robert Muller’s investigation to conclude and give us evidence needed to remove Trump from office via impeachment. Either way, I applaud these White House aids that are trying to placate Trump by never telling him no and just not following through on it, because as it stands right now, they may be the only people preventing some even worse policies from coming out of the White House.