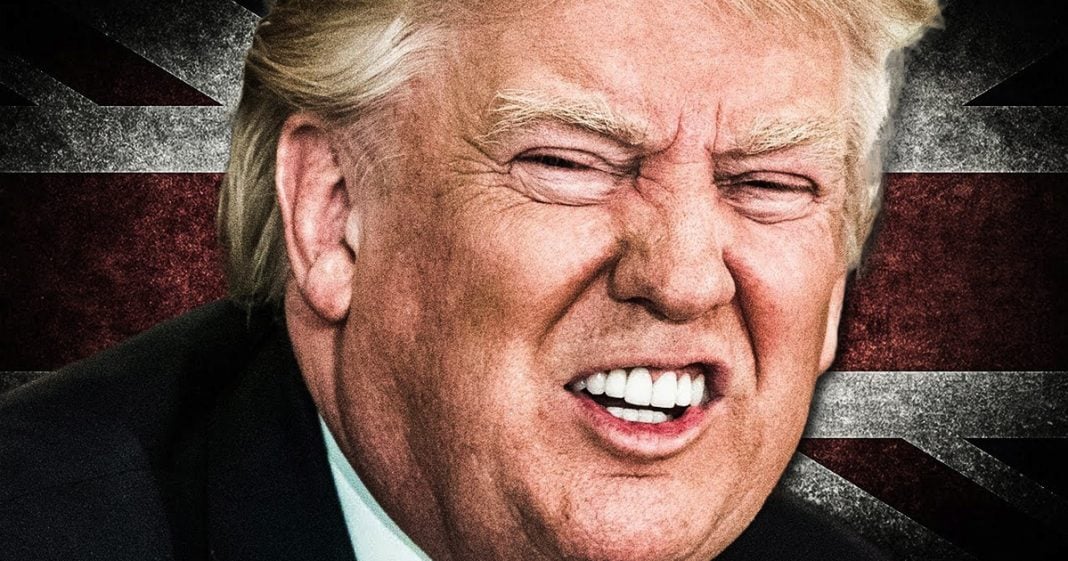 Donald Trump’s long-awaited visit to the United Kingdom has officially been downgraded to a “working visit,” which means that he will no longer be considered a “guest of the queen.” Apparently leaders in the UK have far more integrity than those here in the United States and they understand what a disgusting, embarrassing pig Trump truly is. Ring of Fire’s Farron Cousins explains.

According to a new report by The Independent, Donald Trump’s official visit to the United Kingdom has been downgraded and will now be considered a working visit. What does that mean? Well, it means that Donald Trump will no longer be considered a guest of the queen. There’s going to be no bells and whistles. There’s going to be no red carpets rolled out for the president of the United States. It’s simply going to be Donald Trump sadly getting off a plane, maybe meeting with a few politicians, and then going on his merry way without ever meeting Queen Elizabeth.

This is a big deal. This is a pretty massive move by the United Kingdom. First and foremost, because it shows that maybe they as a country have a little bit more integrity than we have here in the United States. They’ve watched Donald Trump. They understand what he’s about, but more importantly, something they’ve done differently than most people here in the United States, they’ve actually paid attention to some of the more disgusting things he’s said, like this tweet from 2012 for example when he said, “Who wouldn’t take Kate’s picture and make lots of money if she does the nude sunbathing thing? Come on, Kate.” Yeah, probably not exactly the kind of thing the royal family wants to hear from the president of the United States, even though you weren’t necessarily president at the time.

The bottom line is that people in the United Kingdom, the elected leaders, their officials, and the crown doesn’t seem to like Donald Trump, because he’s a scumbag, not because they hate his policies. His policies really aren’t that any different from George W. Bush, who got to meet with the queen. They don’t like him because of who he is as a human being. They don’t trust him. They think he’s, again, scumbag material, and so they’re saying, “No, you’re not going to come meet with the queen. We’re not going to roll out the red carpet for you, because we don’t like you. We don’t trust you, and you’re not the kind of person that we want to be seen being associated with.”

That is a bold move by the United Kingdom, and it’s something that to my knowledge has not happened with past presidents, certainly has not happened during my lifetime or during the reign of Queen Elizabeth, so for them to come out and say that, “Donald Trump, you don’t get to meet with the queen, you do not get to have an official state visit. This is a working visit. You can go talk business with a few people. Then you got to hop back on Air Force One and get the hell out of our country.” That’s basically what the United Kingdom is telling him, and I applaud them for it. I applaud anyone willing to stand up to this disgusting bully, call him out for his words and for his actions, and say that you are not welcome here, because that’s what the UK is doing.