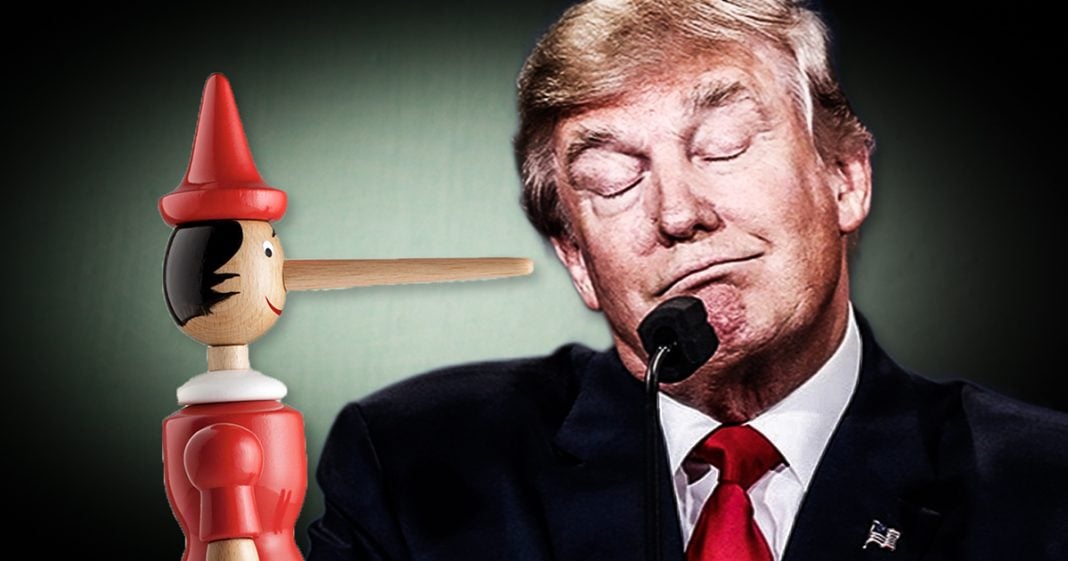 According to analysis performed by The Washington Post, Donald Trump has made 1,318 false or misleading claims in the last 263 days. This averages out to a little more than 5 lies per day, or one lie every four and a half hours. This has to stop. Conservatives are falling for these lies every single time, and as Ring of Fire’s Farron Cousins explains, every one of these lies has a real world consequence.

So far, this year, since the beginning of January, 19 days before he was even sworn in as president of the United States, Donald Trump has told 1,318 lies to the American public.

So that was in the first 263 days of this year, according to the fact checkers over at the Washington Post: 1,318 lies and 263 days. Well, let’s do a little bit of quick math here. That means that every single day of the year, Donald Trump is averaging a little more than five lies per day.

It also means that he is telling a lie to the public every four and a half hours on average. Donald Trump can’t go the time between lunch and dinner without at least telling one lie to the American public, and he told one before lunch and before breakfast and he’s probably got another one in him after dinner.

Why? Because that’s clearly the only thing the guy knows how to do. What’s even more disgusting about this story, the 1,318 lies in 263 days, is the fact that Donald Trump supporters actually believe all of this nonsense that he’s selling him. They actually believe the latest lies that somehow this tax reform package is going to result in more money in their pockets, when in actuality, it’s gonna result in them paying taxes 2% higher than they currently pay, and it’s going to get rid of a lot of the exemptions they use to save money on taxes, so they’re gonna pay even more than that overall 2% increase.

But they don’t believe that. They believe what the president says, even though it’s based on no facts, no figures, no analysis, no statistics. He said it, so they believe it.

They are sheep. They’re not the smartest bunch, which we’ve known that from the beginning, and I hate to sit here and just insult them. But at the end of the day, if a guy is told 1,300 or more lies just this year and you still believe them, then yeah, you’ve got a couple of screws loose up in the attack there and I’m not gonna count you among the smartest people in this country.

Trump’s latest rounds of lies all revolve around his tax reform package, which he’s saying are gonna result in trillions of dollars in economic activity here in the United States, even though every single time we’ve cut taxes on the wealthy, it’s resulted in less economic activity, pushing us into a full-blown recession.

But let’s not forget some of the other greatest hits of Donald Trump. There’s “Obama wiretapped me at Trump Tower,” there’s “My inaugural crowd was much bigger than Barack Obama’s,” there’s “I got a call from the head of the Boy Scouts and he told me he loved the speech,” and let’s not forget, “I got a call from the president of Mexico telling me what a great job we’re doing.”

None of those things ever happened, and even some of them, like the pictures of the inaugural crowd, we spent millions of dollars as a country investigating, so that Donald Trump could find out if those pictures were Photoshopped and people were actually removed from the crowds in editing.

This man is an absolute sociopath. There is something wrong with them. I don’t know any human being that’s capable of telling 1,318 lies in 263 days, and I live with small children, who like to steal treats and tell me that they didn’t. They couldn’t even imagine lying this much.

Donald Trump has severe psychological problems. But you know what else? A lot of the people out there that you see on his Twitter feed responding to everything he says, every lie he says, saying, “Yes, we believe you, #MAGA!”