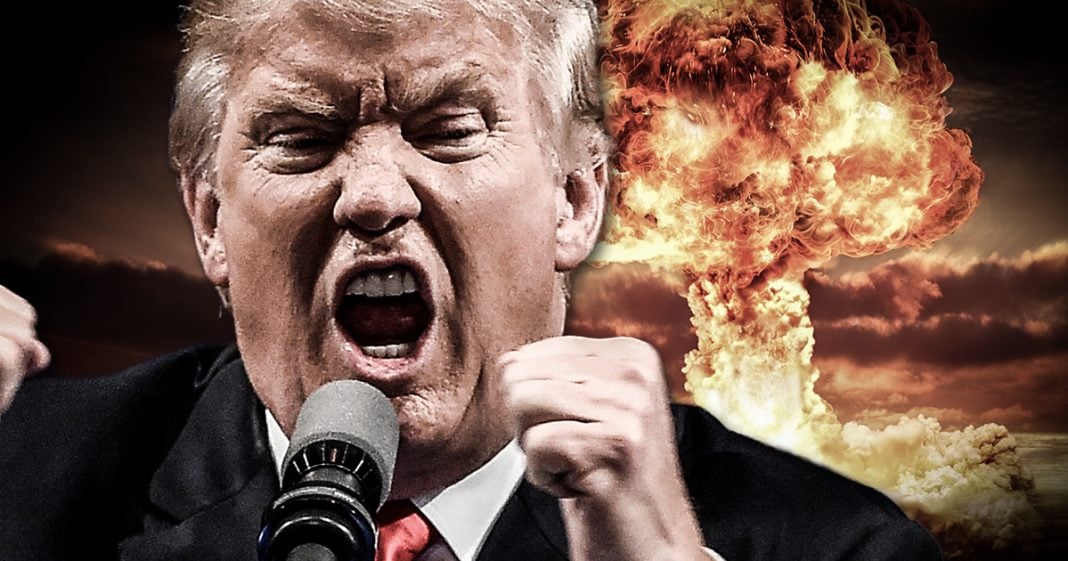 President Trump has made it clear from the start of his administration that he wants to use nuclear weapons to solve his problems. And a recent report shows that he had wanted to ramp up the U.S.’s nuclear arsenal by a factor of 10. Ring of Fire’s Farron Cousins explains why Donald Trump’s desire to use a nuclear weapon should automatically disqualify him from serving as President.

According to new reports out today the reason Tillerson had to come forward and say that Donald Trump is a moron is because during that meeting he said he wanted to increase the United States nuclear arsenal by ten fold. Meaning we have 4,000 nuclear warheads here in the United States today. Donald Trump wanted to bump that number up from 4,000 to 40,000. Meaning that for every nuke we already had he wanted 10 more right behind it.

To put that in a little bit of perspective, in the 1960s at the height, when the Cold War was starting, the Cuban Missile Crisis, we had 32,000 nuclear weapons here in the United States. We’ve dwindled it down to 4,000 because we understand the destructive and dangerous capacity that they hold. And Trump wants to bump us up to levels that we’ve never seen in this country. Why? Because he is desperate to drop one of those nukes on someone somewhere around the planet.

Now we already know that, I believe it was shortly before he was actually sworn in as President, Donald Trump repeatedly asked during national security briefings why we can’t just nuke these people. I believe at the time he was talking about ISIS. But he has shown a willingness to go forth and drop the most destructive bomb ever developed by human beings on someone. And in this case it may no longer be ISIS where he’s itching to drop one of these bombs. It seems to be North Korea at the moment.

And what would happen in that case? Well, you’re talking about a country where about this much of the map is where the bad guys live. The remainder of the country is about 25,000,000 people who are serving essentially as political prisoners. They do not have access to the outside world. They’re not allowed to leave their country. They do not get proper education. They get state written textbooks that do not contain any bit of actual knowledge. It’s all fantasy and folklore about their country that’s not even real. And yet Trump wants to risk those people’s lives, the people who have done absolutely nothing wrong, because he wants to drop a nuclear weapon on somebody.

And then after that, we got to have 10 more right behind it because that’s the kind of psychopath that Donald Trump truly is. It doesn’t matter how much death and devastation these weapons can cause. He just wants as many as possible so that he can boast all around the world that he’s got the biggest missiles ever. You know, I’m sure a very skilled psychologist could come in there can tell us what that kind of obsession means but then again a lot of us can use our imaginations and understand why Donald Trump would obviously be trying to compensate by creating more big missiles because maybe his own personal missile isn’t all that grand.

Either way, Donald Trump has proven time and time again that he is a danger not only to this country but to every country around the globe. It is beyond past time for Republicans in D.C. to step up, invoke the 25th Amendment and get this psychopath out of office.