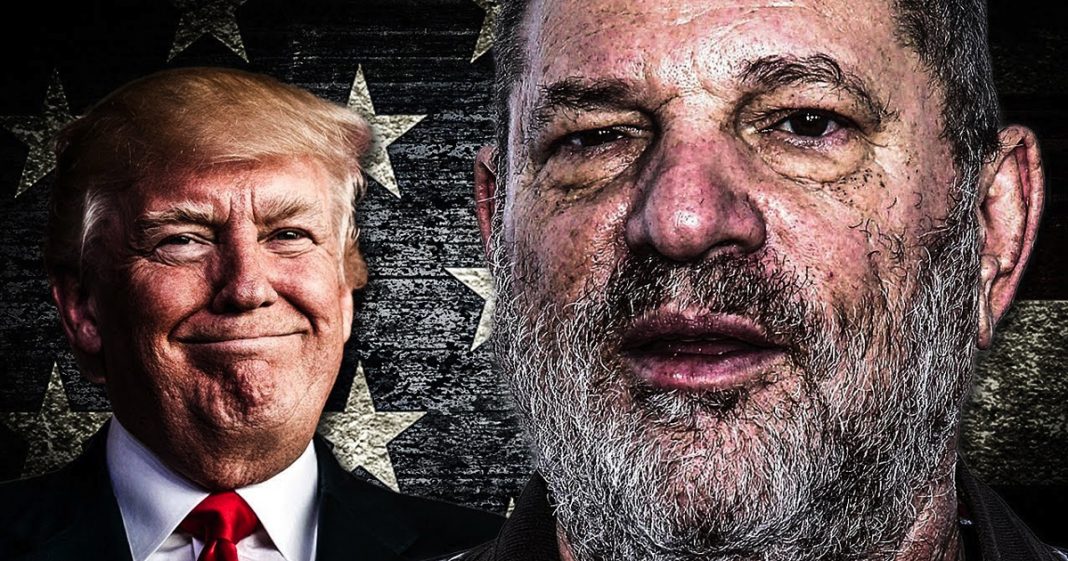 Conservatives like Tucker Carlson and Tomi Lahren are trying to somehow pin the Harvey Weinstein sexual abuse story on Democrats. At the same time, these people have yet to condemn President Trump for his comments about sexually assaulting women. Hypocrisy is rampant among conservatives today, as Ring of Fire’s Farron Cousins explains.

The Harvey Weinstein sexual assault, rape, sexual harassment story has taken an interesting turn in the last 48 hours. Republicans are leading a new charge and wondering why in the hell Hillary Clinton has not come out and denounced this guy. Then when she did, they were pissed off because it took her five days to come out and denounce Harvey Weinstein for his deplorable, disgusting behavior that apparently went on for more than 30 years.

The big question that some people have is, why does Hillary Clinton even need to say anything about it? She took money from him, she’s in a picture with him and so I guess Republicans think that that means Hillary Clinton has to come out and somehow apologize for the behavior of a disgusting human being. Let’s put this into a little bit of perspective: Yeah, there’s a picture of those two together, yeah, she took money, yeah, who else took money? The Republican Party.

Do you know who else has their pictures with Harvey Weinstein? Ivanka, Jared and Donald himself. Why have these scumbags not come forth and been forced to denounce this man, whose behavior they had no connection to? That’s the big question here. Look, I’m not a huge Hillary Clinton fan, as most people probably understand, but to demand that she come out and denounce this thing that she wasn’t involved in whatsoever? I find that a little bit ridiculous and I find it to be a huge double standard for conservatives to come out and demand that she denounce this man.

I’m glad she did. He is a disgusting pig of a human being and, instead of being on his way to prison right now, he’s on his way to Amsterdam to go to sex addiction rehab. That’s how it works for wealthy white guys here in the United States. You don’t ever face justice, you basically get to go on mini vacation in an area, you know, you can pretty much get whatever you want in Amsterdam. Yeah, I’m sure he’s going to be going to rehab a lot there.

Tucker Carlson and Tomi Lahren from FOX News came out Tuesday of this week and publicly asked why it took Hillary Clinton so long, why did it take her five days to come out and say something. That’s disgusting. Keep in mind both Tucker and Tomi work at a network where their former president was forced out over allegations of sexual harassment. The network has had to pay tens of millions of dollars to settle sexual harassment claims. Just in the last 18 months, Bill O’Reilly, their top-rated host, was fired for his sexual harassment activities. Eric Bolling, another host on the network, was recently fired for his sexual harassment activities. Where’s the outrage there, huh? Tomi, Tucker, either of you want to answer that, why you didn’t come out and denounce your coworkers for their activities?

More importantly, all these conservatives that are up in arms about Hillary Clinton and the Democrats and Weinstein’s connection to the Democrats, let me drop a little bit of a truth bomb on you here: You literally voted for a guy who bragged about doing the same kinds of things that Weinstein is being accused of doing. Remember that Access Hollywood tape where Donald Trump talked about going and grabbing women by the pussy? Yeah, you voted for him, you scumbags.

Furthermore, there’s also other audio, other interviews where Donald Trump talked about how he would just randomly go up to women and kiss them whether or not they wanted. He would barge into the dressing rooms at the Miss Universe Pageant while contestants were changing just so he could get a glimpse of them, perhaps naked. You voted for him. You voted, essentially, for Harvey Weinstein, so don’t act all indignant about the fact that Weinstein gave some money to some Democrats.

Not only did he do the same thing for the Republican Party, but you voted for a guy, you go on television every day and support a guy, who did the exact same things. Forty-five women have come forward with allegations against Donald Trump for sexual misconduct, sexual harassment and other sex-related charges. Forty-five women and yet, you will not denounce that disgusting human being, pig of a President, because for some reason, I don’t know, party loyalty always trumps the rights of women in this country.