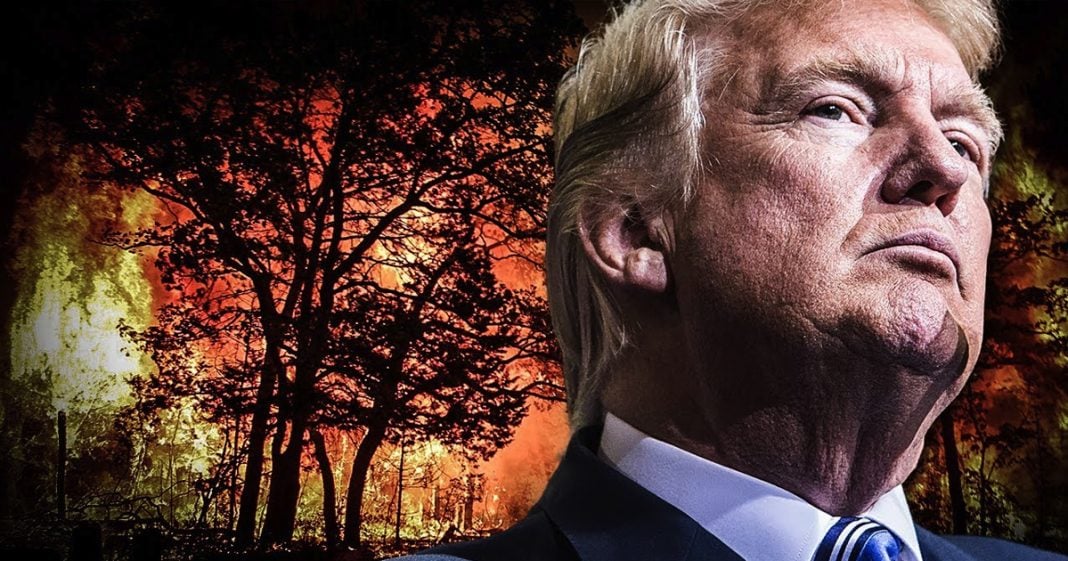 Massive wildfires are raging in California’s wine country right now, with a death toll currently standing at 10 American citizens. But instead of addressing this issue, Donald Trump is on Twitter attacking NFL players and calling media outlets “morons.” This man has to be removed from office – people are now dying from his negligence and arrogance, as Ring of Fire’s Farron Cousins explains

Right now large portions of the State of California are on fire. Wine country in California is on fire, at least 10 people as of right now, have died as a result of these wild fires. So you would think naturally, when we have such a massive natural disaster going on in the United States, that’s costing American lives, you would think that Donald Trump the President of the United States would be out there front and center, trying to take charge and tell people, “We’re going to get this under control.” Well, he’s not. He is on Twitter this morning, a good 24 hours after these fires were really first reported and gained media attention, talking about the NFL. Still.

More than two weeks after his first beef with the NFL, he is still out there this morning, attacking NFL players, praising Cowboys owner Jerry Jones, who says he’ll bench any player that doesn’t stand for the national anthem. Of course, he has no problems playing his star running back Ezekiel Elliott, who’s been accused of beating the crap out of a woman five times in the last year. That’s perfectly fine, just don’t kneel for the national anthem, because then suddenly we have a problem with that.

Nonetheless, Donald Trump is not paying attention to the fact that there is a massive natural disaster happening in this country right now. Instead, he is talking about the NFL. He is attacking ESPN reporter Jemele Hill, who was suspended for her comments on Twitter about the president and the protest, and that is what Donald Trump deems as important today. And let’s keep in mind, just one week ago, nine million children in the United States had their health care funding cut off by Congress, because they couldn’t make the deadline, Donald Trump never said a word about that. He was once again busy attacking the NFL and black football players, accusing them falsely of protesting the flag and United States and our soldiers, when actually they were protesting police brutality and the murdering by police officers of unarmed black people all over this country.

Donald Trump is unfit to be President of the United States. He has proven that time and time and time again, and I don’t know what more it’s going to take, for everyone in this country to finally wake up and say, “You know what? This guy doesn’t care about Puerto Rico. This guy doesn’t care that nine million children lost their health insurance. This guy doesn’t care that almost a dozen people have lost their lives in wildfires that are happening because we’re ignoring the threat of climate change.” All he cares about is his own ego, his own little personal fights, and he’s using the office of the presidency to try to bully people all over this country.

That is unacceptable. Trump is unacceptable and the lack of outrage from half of the country right now, is what is the most unacceptable. People need to be getting angry at this man, he is letting American citizens here in the mainland, in Puerto Rico, all over this country, die, because he wants to pick fights with NFL, ESPN and MSNBC. Because yeah, let’s not forget, he also tweeted out this morning that the people at NBC News are the real morons, not like Rex Tillerson, when he called Donald Trump a moron. Trump still says that’s fake news and NBC reported it, so yeah, they are the real morons here.

No, the real moron, is the guy sitting in the Oval Office, ignoring the massive death that is happening all across this country and in United States territories like Puerto Rico. That is the real moron in this situation, because he has proven that not only can he not handle these situations, but he clearly doesn’t care about them either.