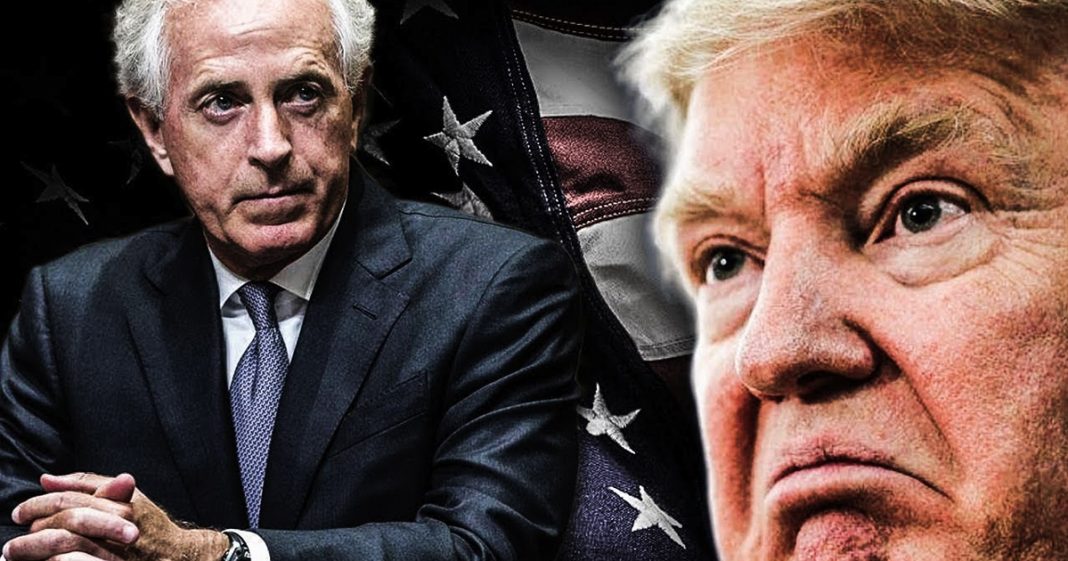 Republican Senator Bob Corker unloaded on Trump in a recent interview with The New York Times, where he said that Republicans in DC regularly discuss the fact that Donald Trump is not fit to hold office. Could his admission finally lead to action from the Republican Party to remove Trump from office, or will they roll over and let this unhinged lunatic continue to destroy our country? Ring of Fire’s Farron Cousins discusses this.

Republican Senator Bob Corker from the state of Tennessee announced recently that he would not be seeking reelection to the US Senate. As such, he has taken this opportunity, knowing that he doesn’t have to go face his constituents again or deal with the wrath of any sitting Republican politician, he’s using this opportunity to come clean about what Republicans in Washington, DC really think about Donald Trump. According to a recent interview that Corker gave to the New York Times, Republicans in DC behind the scenes are talking constantly about the fact that Donald Trump is unfit to be the president of the United States.

Corker’s statement might give some of these Republicans in DC the clearance, the back-up support to come forward and publicly admit that Donald Trump is unfit to serve for office, but more importantly, it might give them enough courage to invoke the 25th Amendment and attempt to remove Donald Trump from office in a way that doesn’t even involve impeachment and has nothing to do with the Bob Mueller special prosecutor investigation. They could do it today, because there is no way that Donald Trump would be able to come back and fully prove that he is mentally capable and perfectly fit to serve as president of the United States. The evidence against him is overwhelming, the wildfires in California, the flooding in Houston, the hurricanes in Puerto Rico. The evidence is there, if Republicans chose to move on it.

But here’s the thing. They won’t. How do we know? Well, let’s take a look at Lindsey Graham, one of the most vocal Donald Trump critics in Washington, DC, allegedly, who spent the weekend playing golf with the president. Then he got on Twitter, did an interview, talked about the fact Donald Trump shot a 73 in windy conditions. What an amazing person. I love him so much. He’s so great. Graham was supposed to be some kind of anti-Trump super Republican? No. Those don’t exist. Republicans are talking a big game in public because they understand that the public doesn’t like Donald Trump, but at the end of the day they’re going to side with him every single time they get the opportunity. Corker has as well. It’s refreshing to hear Corker come out and admit that Republicans are saying all these things, but don’t think for a second that any of them are actually going to act on it.