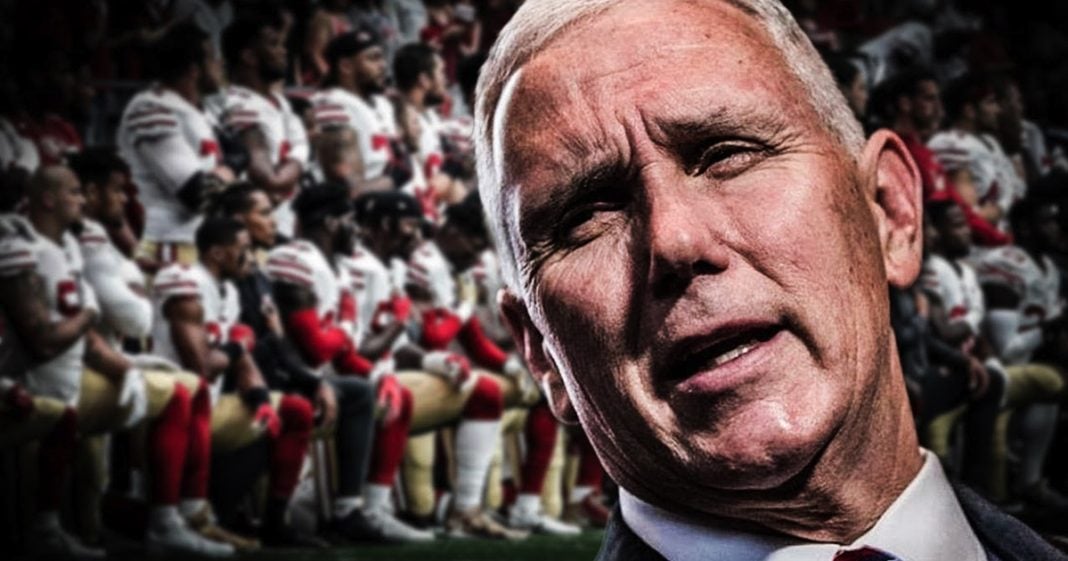 This past weekend, Vice President Mike Pence walked out of a professional football game because some of the players didn’t stand for the national anthem. This political stunt cost taxpayers more than a quarter of a million dollars and represents the latest in a long line of incidents where snowflake Mike Pence has been triggered by the most innocuous things. Ring of Fire’s Farron Cousins explains.

In the last 12 months, one of the most common insults that conservatives have come up with for liberals, is to call them a snowflake. Essentially what this means is that, it’s a person who is uncomfortable or is easily triggered by anything that’s outside the norm of what they expected to be.

I understand maybe there’s a few liberals that are like that, but as it turns out, that term mostly applies to conservatives. Case in point, vice president Mike Pence, who spent a quarter of a million tax payer dollars this past weekend, just so that he could walk out of an Indianapolis Colts game, because some of the players didn’t stand for the national anthem.

Apparently, vice president Mike Pence was so triggered by this event, that he decided to stage his own protest, which he’s perfectly entitled to, and walked out of the stadium said, “To hell with the game, I’m not going to sit here.”

Well, again he’s perfectly entitled to walk out of the game, he’s entitled to protest anyway he wants, but not on the tax payers dime. You see, that’s where the problem arises. This was a $250,000 publicity stunt, that republicans are actually now using to fundraise for their campaigns, but all that aside, it really shows that Mike Pence is the ultimate conservative snowflake in this country right now.

Let’s not forget, Mike Pence is the kind of guy, who will not sit down at a restaurant table with a woman who is not his wife, if his wife is not present. That’s not necessarily a religious thing. I know he claims it is, but it’s really not. That’s more of a, “I have a deep sited psychosis that needs to be checked out by medical professionals. Also I’m a snowflake.”

Then if we go back even further into Mike Pence’s history, we see that he was actually angered over the movie Mulan, he wrote an online blog in 1998 about the Disney movie Mulan because he said it shows that women are unfit to serve in the military. Why? Because Mulan, the female character of the movie who pretends to be a man in order to join the military and ultimately saves China, she fell in love with her superior officer. That’s the issue that Mike Pence had with that Disney movie, so much so that he felt the need to get online and complain about it.

Conservatives are the real snowflakes here. They cannot stand to see anyone else succeed, anyone else exercise their constitutional rights, anyone else have an opinion, a voice, a platform. Mike Pence exemplifies everything that is wrong with it. It’s not, again, he’s religion is bad enough, but these things that he does aren’t even necessarily directly tied to his religion. It’s just something that’s gone wrong in his own brain.

If Mike Pence wants to protest the NFL or protest Mulan or protest women sitting in restaurants, he can do that, that’s perfectly fine. Just don’t do it at the expense of US tax payers.