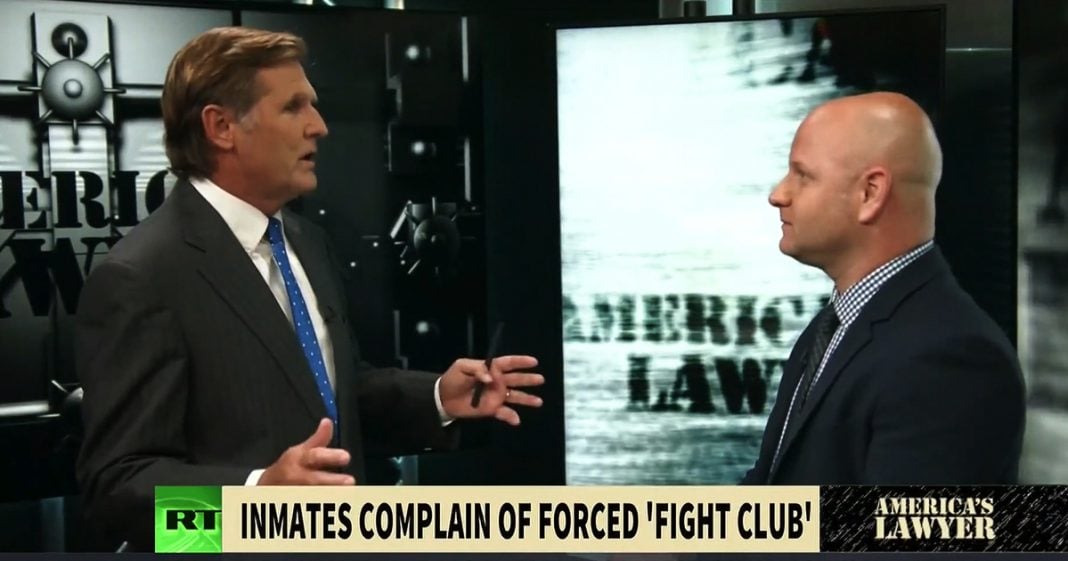 Via America’s Lawyer: Mike Papantonio is joined by Farron Cousins to discuss a lawsuit where Ohio prison guards forced juveniles into a weekly ‘Fight Club’ ritual.

Mike Papantonio: An Ohio juvenile detention center is being taken to court by four former inmates who say they were forced to participate in organized fights. Their lawsuit alleges that these brutal and bloody brawls were hosted by detention officers Freddie Hodges and Joshua Zimmerman, with complacency from others. Joining me to talk about this is the executive editor of The Trial Lawyer Magazine, Farron Cousins. What’s the full story with this lawsuit, Farron?

Farron Cousins: Basically, what these guards at this juvenile detention facility were doing was every Friday they had what they called fight night. They would get these juveniles in there, force them to fight, and some of the ones who refuse to fight, they would then pick the largest inmate there and make that person just go beat the heck out of whoever refused to actually come down into these fights. This was a huge … only two people resigned as a result of this, but there was complacency among the other guards. There was complacency among the medical staff who would attend to these and make sure that nobody had visible bruises or injuries. In fact, they actually encourage them to hit each other in the bodies, so that other guards who were not participating wouldn’t be able to see the injuries.

Mike Papantonio: So I take it that these two main guards are gone.

Farron Cousins: Yeah. I mean, they resigned after the initial investigation.

Mike Papantonio: Okay. They resigned rather than being prosecuted. Hopefully, they are going to be prosecuted. But the rest of the story is it’s impossible for the other guards and the other management people not to have known this is going. Is that your take on this?

Farron Cousins: Oh, absolutely. Look, there are security cameras all over the place. Tons of people knew about this. Every inmate there knew about this. We don’t know yet to what extent they tried to warn anyone else, or if they had spoken out about it. But that’s something we see a lot at juvenile detention facilities is that they do not speak out about the abuse. They are children. They don’t know what rights they’re entitled to. In many cases, not just this one, but in others, they get threatened with further retaliation if they come forward with any evidence of abuse from the guards. That’s why 46 states and Washington D.C., investigations found systemic abuse at juvenile detention facilities. Almost all across the country, every place.

Mike Papantonio: Farron, how long was this going on? That’s the first part of the question. The second part, what alternative really does a juvenile inmate have? Because if they’ve been in that situation, there really are no alternatives to them are there?

Farron Cousins: Absolutely not. They have absolutely no power, no authority to say. And when they did say no, again, the guards would set the largest inmates on them. This was going on for years. The guards, in fact, would refer to the good old days, they called them, when they could have fight nights, and have the medical staff involved to get down there and kind of keep kids healthy enough to keep fighting. The good old days is what the guards called it.

Mike Papantonio: Yeah. Hopefully, somebody goes to jail on this one.